No matter who wins in November, America should get ready for 10 more years of drones.

Nov. 3 marks the tenth anniversary of America’s Third War — the campaign of targeted killings in non-battlefield settings that has been a defining feature of post-9/11 American military policy as much as the conflicts in Iraq or Afghanistan.

Unlike other wars, there won’t be any ceremonies at the White House or Pentagon, parades down Main Streets, or town square rallies to acknowledge the sacrifices made by the countless civilian and military personnel involved. There won’t even be a presidential statement since targeted killings cannot and will not be recognized by the U.S. government. The war is conducted by both the CIA — covert and totally unacknowledged — and by the Joint Special Operations Command (JSOC) — described without any specificity as “direct action” by the White House. Whether the CIA or JSOC is the lead executive agency, the Third War is marked by the limited transparency and accountability of U.S. officials.

The Third War, which began with a drone strike in Yemen, had two simple goals: preventing another attack on the U.S. homeland and capturing or killing those al Qaeda operatives responsible. Bush administration officials warned ominously that its forward-leaning counterterrorism approach mandated preventive attacks against terrorist safe havens. Five days after 9/11, Vice President Dick Cheney stated that the United States would have to work “the dark side,” and an anonymous senior official declared: “The gloves are off. The president has given the [CIA] the green light to do whatever is necessary. Lethal operations that were unthinkable pre-September 11 are now underway.”

On September 17, 2001, President Bush signed a memorandum of notification that authorized the CIA to kill, without further presidential approval, “two or three dozen” high-value targets. A former CIA official estimated: “There are five hundred guys out there you have to kill. There’s no way to sugarcoat it — you just have to kill them.” (In a quaint historical footnote, on October 15, 2001, the Bush administration rebuked Israel for killing the suspected plotter of a Tel Aviv terror attack: “It’s the same position that we’ve said over and over again, and that is that we oppose the policy of targeted killings.”)

The United States certainly killed many suspected members of al Qaeda during the operation in Afghanistan to overthrow the Taliban. However, surviving al Qaeda operatives simply went elsewhere, including just across the Durand Line into the tribal areas of Pakistan. In May 2002, Gen. John Keane, commander of the 101st Airborne Division, vowed: “We have broken their will and they are trying to establish another safe haven now in Pakistan…when the time is right, we will deal with that one as well.” Indeed, two years later, his prediction came to pass on June 17, 2004, when a Hellfire missile killed Taliban commander Nek Mohammed, beginning the CIA campaign of drone strikes in Pakistan that continue to this day.

Al Qaeda operatives also relocated to Yemen. It was on November 3, 2002, after a year-long manhunt and several missed opportunities, that a fusion of human intelligence assets and signals intercepts pinpointed Abu Ali al-Harithi — an operational planner in the al Qaeda cell that bombed the USS Cole in 2000 — and his bodyguards near the Saudi Arabian border. After determining that Harithi and a group of unknown men were traveling in an SUV, a CIA Predator drone fired a single Hellfire missile, killing al-Harithi, four unknown Yemenis, and Ahmed Hijazi (otherwise known as Kemal Derwish) — a naturalized U.S. citizen who recruited six men from Lackawanna, New York, to briefly attend an al Qaeda camp in Afghanistan. An official later claimed Hijazi’s death was justifiable “collateral damage” since “he was just in the wrong place at the wrong time.” When reporter Dana Priest asked a CIA spokesperson, “Wasn’t that assassination?” he yelled: “They attacked us, remember. Don’t you get it?”

Since November 2002, there have been 400 more documented U.S. targeted killings in the non-battlefield settings of Pakistan, Yemen, Somalia, and the Philippines (where there was reportedly one). Although over 95 percent of all targeted killings have been conducted by CIA and JSOC drones, a small number have also been carried out by Air Force Special Operations Command AC-130 gunships, cruise missiles fired by Navy ships or planes, and raids by special operations forces, including the one that killed Osama bin Laden in May 2011.

Targeted killings have exacted a considerable toll, far beyond what anyone imagined in the immediate post-9/11 era. Although the publicly available numbers vary among research organizations, an estimated 3,400 people have been killed — 13 percent of whom were civilians. To more fully understand the scope of these operations, the charts below present data derived by the New America Foundation, The Bureau of Investigative Journalism (TBIJ), and the Long War Journal. (Out of the three, only TBIJ provides estimates for Pakistan, Yemen, and Somalia.) Since the presentation of the data varies (either exact figures or ranges), these charts are based on the mean averages provided. These estimates are further complicated by the fact that some groups targeted by drones purposefully operate out of civilian facilities in an effort to avoid being killed, by the lack of reliable direct access for journalists due to threats from governments or nonstate actors, and by the Islamic practice of washing, wrapping, and burying an individual on the date of death. Some claim these figures are too high, and others too low. The truth is that nobody knows. 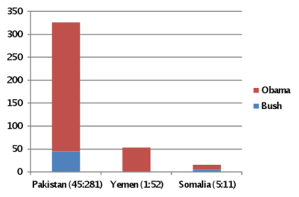 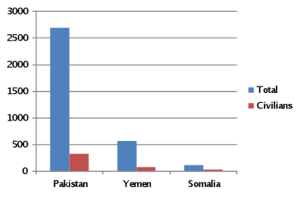 Despite the immense death toll, it is important to mention this is also the most one-sided war in U.S. history: 3,400 suspected adversaries and civilians to zero (Americans). No U.S. government employee has directly lost his or her life in all of the known targeted killing operations. Not the launch control element operators who take off and land drones in theater, the pilots launching stand-off missiles, or the special operations forces deployed on the ground. By comparison, 6,557 U.S. service members have been killed and over 50,000 wounded in action in operations in Iraq and Afghanistan, according to Pentagon data.

Although the Third War began 10 years ago, it shows no signs of ending. It will certainly outlast the wars in Afghanistan and Iraq, which were also commenced as a result of the terrorist attacks on 9/11. During the final presidential debate, Mitt Romney warmly endorsed President Obama’s drone strikes: “I support that entirely, and feel the president was right to up the usage of that technology, and believe that we should continue to use it.” Meanwhile, last week, Greg Miller reported that, among senior Obama administration officials, “there is broad consensus [targeted killings] are likely to be extended at least another decade.” But, in the words of one senior official: “We’re not going to wind up in 10 years in a world of everybody holding hands and saying, ‘We love America.'” What was once considered an immediate response to an exceptional threat to the United States is now a permanent and institutionalized feature of U.S. foreign policy. Perhaps by November 3, 2022, policymakers and the American people will have noticed.