As the United States dithers, an emboldened North Korea is quietly establishing itself as a small nuclear power.

Whoever wins Tuesday’s election will face a long list of foreign-policy challenges, ranging from Iran’s nuclear weapons program to the Arab Spring. Usually lurking somewhere behind the frontrunners is North Korea and its own home-grown nuclear effort. But there are good reasons why dealing with the threat presented by Pyongyang should be near the top of the to-do list for a new president. After all, if the North follows its historical playbook, it may present him with one of his first crises abroad.

Why should a new administration view the challenge of North Korea as a priority? First, regional perceptions that the United States is not paying sufficient attention to the North Korean threat would raise doubts about the credibility and seriousness of the American “pivot” towards Asia. Second, we cannot ignore the fact that a hostile, nuclear-armed North is located next door to South Korea and Japan, two major military allies and trading partners. Both countries will question U.S. security commitments if they perceive a weakening of American resolve to reduce the North Korean threat to their security. For these reasons alone, whoever wins on Nov. 6 should pay more attention to the North Korean problem before it gets out of hand.

Even more disturbing, U.S. diplomatic passivity in the face of a growing North Korean threat feeds Pyongyang’s narrative that it now has the upper hand in its relationship with the United States. North Korea believes it has emerged from a difficult three years with flying colors. Pyongyang has successfully weathered a U.S.-South Korean effort that, in the words of one former Obama administration official, was intended to “force North Korea to reassess the value of its program and therefore maximize the chance of pursuing denuclearization seriously.”

How did that work out?

Despite that effort, the North’s leadership transition is progressing, its economic decline has halted, and its development of weapons of mass destruction is moving forward. This new reality was obvious to us during a recent meeting with North Korean officials, who felt that they were now in a strong position to deal with the United States.

The most obvious danger is North Korea’s WMD program, which may grow significantly by 2016. True, the North hasn’t conducted any missile or nuclear tests, failed or successful, recently. But we cannot ignore the reality that Pyongyang is steadily moving down the road to becoming a small nuclear power, perhaps in as little as four years. A recent study by a well-regarded American expert concludes that, in a worst-case scenario, the North may acquire almost 50 nuclear weapons by 2016 (it has a handful today). Moreover, despite the failure of Pyongyang’s missile test last spring, the North is sinking millions of dollars into facilities designed to test new, bigger, and better ballistic missiles that presumably will be armed with nuclear weapons. 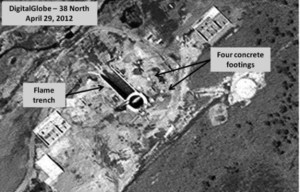 Measurements of the flame trench and distances between the four concrete footings for a gantry at a new pad under construction at the Tonghae Satellite Launching Ground (Musudan-ri) indicate a site designed for a larger rocket than the Unha. Propellant and oxidizer buildings are larger than those at the new Sohae Satellite Launching Station (Tongchang-ri). 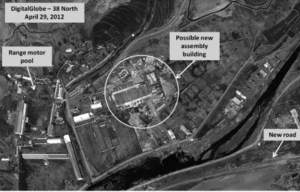 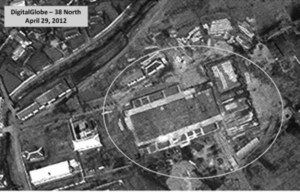 Part of the upgrade at Tonghae, this building is much larger than the existing facility. Its high bay space is twice as big as the new assembly building at the Sohae site, which can already accommodate rockets larger than the Unha.

There are even greater dangers. We all remember Pyongyang’s provocations in 2010 — the sinking of South Korea’s naval vessel, the Cheonan, and the artillery attack on Yeonpyeong Island. What wasn’t discussed publicly at the time was that, in the days following the artillery barrage, both Beijing and Washington were seriously concerned that tensions could dramatically escalate between North and South Korea, threatening to draw China and the United States into a confrontation that would have devastating regional and global implications.”

In response to these challenges, Secretary of Defense Leon Panetta’s recent meeting with the South Korean Defense Minister and their agreement to focus on bolstering mutual deterrence of a nuclear-armed North Korea, along with previous announcements about stepped up U.S. missile defense efforts in Northeast Asia, make perfect sense. Those steps are certainly necessary, but the experience of the past three years has demonstrated they are also insufficient.

Other emerging political realities also point to a pressing need to recalibrate U.S. policy. The ground underneath our effort with South Korea is about to shift; Seoul will elect a new president in December, and it’s clear from the candidates’ public statements and campaign positions that whoever wins will press for reinvigorated diplomatic efforts to engage Pyongyang.

Second, “leading from behind” may be the right approach in dealing with other crises, but in the case of North Korea, it has backfired. Left to their own devices, China, Russia, and Japan as well as other key players in this drama will pursue their own political and economic interests, paying little attention to our top priority — dealing with the North’s growing WMD effort. Even our European allies seem to have little interest in dealing with this problem. Witness the announcement last week that Kempinski, a well-known German hotel operator, will take over renovation of the 105-story Ryugyong Hotel, which dominates the Pyongyang skyline but has been uninhabitable for almost three decades. The hotel is slated to open next year. All these countries remain interested in arresting Pyongyang’s nuclear development, but only active U.S. diplomacy can provide the glue to hold that effort together. In short, unless the United States recalibrates its policy, not only will it be diplomatically isolated but it will also enable the North to achieve its own fantasy of becoming a small, intimidating nuclear power that is tacitly accepted by other countries.

Recalibrating U.S. policy will require a new diplomatic offensive — ideally, worked out with the new South Korean government. That may prove difficult, however. After three years of following the lead of a conservative South Korean government that had little real interest in diplomacy with the North, a second-term Obama administration may find it hard, although not impossible, to switch gears. As for a Romney administration, the odds are that it would be even less interested in diplomacy and more inclined to put the squeeze on Pyongyang since its ranks will be peppered with hard-liners like John Bolton.

Nevertheless, if Washington and Seoul can get on the same policy page, one new approach that should be seriously considered would be to immediately seek to begin a “peace process” on the peninsula, replacing the temporary armistice that ended the Korean War and is still in place with more permanent peace arrangements. That process would move forward hand-in-hand with steps by Pyongyang to arrest and reverse its WMD program development. If it works, and there is certainly no guarantee that it will, such an approach could dampen tensions by addressing core issues of war and peace while gradually building better relations between the North, the United States, and South Korea. Moreover, such an initiative, which appears to have the support of Democratic and Republican experts in Washington and key segments of the foreign-policy elite in Seoul, would also be welcomed by China, which is nervous about current tensions on the peninsula.

But unless it acts quickly, Washington may not get a chance to shift gears even if it wants to do so. History has shown that Pyongyang may not wait for a presidential transition to be completed. In 2009, North Korea tested a long-range missile and a nuclear weapon within months of President Obama taking office. The North has already taken a step in the wrong direction. At our recent meeting with North Korean officials, they stated that Pyongyang will no longer adhere to a key provision of the September 2005 Six Party Talks agreement that is the touchstone for future negotiations. Rather than insisting on “simultaneous actions” by both sides, the North now wants the United States to take unilateral actions first to demonstrate its sincerity.

It is unclear how the results of the upcoming presidential elections here and in South Korea will factor into Pyongyang’s calculations. But if North Korea decides to up the ante, it could, for example, announce that it will no longer honor its pledge in the 2005 agreement to denuclearize. Most experts believe achieving that objective has become more difficult with each advance in the North’s WMD program, but such a step would have a dramatic public impact. North Korean officials have also hinted in recent meetings that Pyongyang is considering a pronouncement that it is now capable of mounting nuclear warheads on missiles, passing another milestone in its ability to deliver nuclear weapons and presenting, in the words of one South Korean official, an “existential threat” to Seoul. Although it remains unclear whether the North Koreans can mate warheads to missiles, the political impact of such an announcement should not be underestimated. Finally, Pyongyang could conduct new missile and nuclear tests this spring, spurred on by the recent U.S.-South Korea agreement allowing Seoul to develop long-range ballistic missiles that can cover all of North Korea.

Maybe the North will patiently watch and wait. Past experience, however, tells us that it would be a mistake to base U.S. policy on such hopes and the goodwill of Pyongyang. Washington and Seoul may be able to head Kim Jong Un off at the pass if they can pivot quickly and signal a new diplomatic approach. Without quick action, however, it may prove too late, condemning the United States, its allies, and the international community to meekly stand by and watch the birth of another nuclear power.