A short history of spies and their sex scandals.

As long as there have been spies, there have been spy scandals. Usually, however, it's because a senior official got hooked up with an enemy spy, most famously like British Secretary of War John Profumo, who in 1963 was "dating" an alleged call girl who was also involved with a Soviet naval official suspected of being a spy. Down he went.

That was a long time ago. And in the half century since, there's no known record of a Western intelligence chief resigning over the love of a person not his wife. 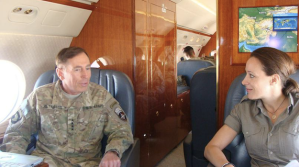 As long as there have been spies, there have been spy scandals. Usually, however, it’s because a senior official got hooked up with an enemy spy, most famously like British Secretary of War John Profumo, who in 1963 was “dating” an alleged call girl who was also involved with a Soviet naval official suspected of being a spy. Down he went.

That was a long time ago. And in the half century since, there’s no known record of a Western intelligence chief resigning over the love of a person not his wife.

Until Friday, that is, when the once unsinkable David Petraeus announced he was resigning because of his  “extremely poor judgment by engaging in an extramarital affair.”

The target of his affection was quickly identified as Paula Broadwell, the author of a recent hagiographic book about him, All In: The Education of General David Petraeus.

According to veteran intelligence reporter Ron Kessler, who has a well-drilled pipeline into the FBI, the resignation of Petraeus “followed an FBI investigation of many months” prompted by the interception of an email he sent to the “girlfriend.”

Nothing remotely like that has touched the 19 CIA directors who preceded Petraeus.

The late William Colby, who headed the agency briefly during the tumultuous post-Watergate congressional investigations into assassinations in the mid-1970s, abruptly divorced his wife of 30 years and took up with a younger woman, but that was long after he resigned.

Which is not to say other senior CIA officials haven’t been entangled in messy affairs and indiscretions, and easily survived.

A chief of the CIA’s operations wing after 9/11 was caught on a security camera in an agency garage getting oral sex from a female subordinate, according to a widely circulated story. It didn’t dent his reputation, perhaps because he was poorly regarded anyway, three agency sources said, and already on the way out.

Likewise, one of the CIA’s chiefs of station in Baghdad after the 2003 invasion was “notorious for sleeping with subordinates,” as one senior ex-agency official put it, in an account echoed by several other sources over the years. “He was put in the penalty box a couple of times,” the source said, “but it was never never anything fatal,” despite the written complaints of at least one woman serving there. He went on to to other higher-ranking agency jobs.

CIA operatives are supposed to be outliers of a sort, so no one should be surprised. But there’s some invisible line that can’t be crossed.

“In the [training] class before mine,” another former operative recalled Friday, one [trainee] was ejected for dropping his pants in a bar in front of female trainees. He later ran (unsuccessfully) for congress, and actually had the nerve to refer to his CIA background during the campaign, I’m told, confident that the CIA wouldn’t comment on why he no longer worked there.”

“That one definitely happened,” the source said. “They made things tougher on my class because of that moron.”

In contrast, lower-level operatives who get entangled in affairs with foreigners often pay a steep price, usually because they failed to report it fully, although men who did the same got off scot-free, according to memoirs by former operatives like Melissa Boyle Mahle.

The problem is that affairs can leave operatives, or officials, open to blackmail. While the KGB had a training program for “swallows,” women (and men) deployed to seduce officials and spies in the United States and other western governments, the CIA wasn’t adverse to using the technique as well.

Usually, the gambit is employed as subtly as a stiletto: cameras are deployed in hotel rooms to record the target in flagrante. Presented with the evidence, the target either meekly succumbs to blackmail, or if he or she is smart, quickly reports it to superiors and the matter is discreetly deep sixed.

The Russians are still at it, judging by numerous instances, including the 2001 discovery by a British MP that an aide was suspected of being a Moscow spy.

The game is played many ways. In 1941, the FBI discovered that a young Navy lieutenant in Washington, John F. Kennedy, was dating a Danish beauty by the name of Inga Arvad, whom it had under surveillance as a suspected Nazi spy. Kennedy was warned to stay away — or else.

These days, the CIA’s ranks are honeycombed with women, many in senior positions. Since they, like their male counterparts, are recruited in part for their naturally wily ways, which are encouraged by spy training, it’s not surprising that some use sex to get ahead.

“I went through training with a very hot young ops officer trainee,” recalled another former agency operative Friday, “who slept her way to the top with a COS [chief of station], managed to get stationed with him on Cyprus, and then they both had to resign in disgrace because the COS was trying to buy and smuggle out rare Greek Orthodox Icons via dip pouch. They both got cashiered.”

Win some, lose some.

“Then there was the female NOC officer who slept with all of her Brazilian agents to get information on their rocket program and nuclear weapons program,” this former operative continued. NOCs — an acronym for non-official cover, are CIA spies who work outside a U.S. embassy, without benefit diplomatic protection.

“The sex with agents was overlooked because she produced good intelligence. So they promoted her to be the first NOC officer in Moscow. Where she promptly fell in love with an FSB officer named Yuri and moved into his apartment. They never did get back her commo [communications] gear. Then they sent another female NOC officer to Moscow, and didn’t tell her about the ‘fate’ of the first NOC.  When she found out, she quit the agency and was never heard from again.”

Such stories, whispered with glee at agency watering holes along Route 123 in McLean, Va., always seem to be mostly true, but who knows?

Several CIA sources were curious about why Petraeus was forced to resign, rather than just admit to an affair, separate from his wife, and move on.

But those who know him called it “an honor thing” that “violated his personal code.”

In any event, these days the CIA’s director, like other agency employees, has to submit at some point to a polygraph exam on “lifestyle” questions, which certainly would have prompted a confession to the affair.

“There’s no way he’d make it through without talking about that,” said former agency official Charles Faddis. “That’s gonna blip.”