Whose job is it to stop an asteroid from hitting the Earth?

Update, February 15, 2013: Today, a 150-foot long asteroid with the bland designation of DA14 will pass approximately 17,000 miles from Earth, slipping within the orbit of some communications satellites. At 9:20 this morning local time, a much smaller meteor exploded in the atmosphere above Chelyabinsk, Russia. The fireball, called a “bolide,” created a large shockwave that has caused upwards of 900 injuries as a result of shattered windows and damaged roofs. The meteor over Russia was relatively small — the Russian Academy of Sciences estimates it weighed around 10 metric tons, compared to the 180,000-ton DA14 — and it appears not to have been detected before entering the atmosphere. But what about larger asteroids, the ones like DA14, that astronomers find crossing Earth’s path? Who’s there to stop a much bigger bang than what happened at Chelyabinsk? We took a look last December, the last time a large asteroid came a little too close for comfort.

Not to be overly alarmist, but Earth has had two near-misses with large asteroids so far this month. On Wednesday, a hunk of space rock three miles in diameter and going by the designation 4179 Toutatis passed by the planet, missing by 4.3 million miles, or about 18 times the distance from the Earth to the moon.  The day before, an approximately 100 foot-wide asteroid passed much closer — within 140,000 miles, slipping between the Earth and the moon. Neither of these are the Planet X that some New Age doomsayers claim will bring the end of the world on December 21 (the date the ancient Mayan calendar ends) nor are they quite on the scale of the six-mile wide asteroid that wiped out the dinosaurs — but still, even a “small” asteroid impact could cause tsunamis, skyline-flattening blasts, and at an extreme, nuclear winter.

The problem is that while the effects might be monstrous, in the cosmic scale of things these “near-Earth objects” (NEOs) are tiny, and thus difficult to detect. XE54, the 100-foot asteroid that passed by on Tuesday, wasn’t discovered until two days before its fly-by. The effect of an NEO impact would have global implications, but whose responsibility is it to find these space rocks and, if necessary, to stop them?

At present, NEOs are discovered and tracked by an informal international network of professional and amateur astronomers. Their findings are cataloged and published by the Minor Planet Center, which is run by the Smithsonian and has the support of the International Astronomical Union, the leading professional society of astronomers. In addition, the U.S. government has legally required NEO research. In 2005, Congress mandated that NASA identify at least 90 percent of all NEOs wider than 450 feet by 2020, though, as a 2011 report by the National Academy Sciences points out, Congress did not appropriate funds to meet this goal.

NASA’s current efforts include surveys to identify the largest NEOs, and partnerships with some military- and university-operated telescopes. NASA is also cooperating with other countries’ projects, including the Japan Aerospace Exploration Agency’s Hayabusa space probe, which intercepted asteroid 25143 Itokawa in 2005 and returned samples to Earth, and the Canadian Space Agency’s Near-Earth Object Surveillance Satellite, scheduled for launch next year. 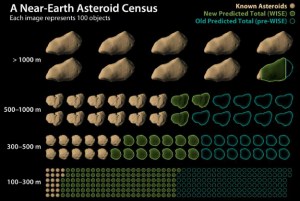 Data from NASA’s Wide-field Infrared Explorer (WISE), an orbiting space telescope, has led astronomers to estimate that there are approximately 20,000 NEOs with diameters greater than 330 feet. This is an improvement over previous estimates, but even with the revised lower numbers, astronomers have found maybe only one-fourth of the space rocks in Earth’s path. Worse, when they are identified, it’s often only a few days before they pass unnervingly close to home. If one of these NEOs were on a collision course, options to deflect it would be limited — and though international law regulates issues of sovereignty and military use in space, there is no international framework for whose responsibility it would be to avert an asteroid impact. If the United States has a plan, it’s not public.

That may be changing. The United Nations Scientific and Technical Subcommittee has a special working group on NEOs advised by a special coalition of experts (called Action Team 14), ranging from space agencies to advocacy groups. Together, they are working to formalize an U.N. framework for coordinating an international response to potentially dangerous NEOs. Their recommendations, which will be presented in February, are expected to include proposals to establish two institutions. The first is an international asteroid warning network to coordinate the search for NEOs, determine which ones are threats, and what their characteristics are (what they’re made of, how fast they’re traveling, and other factors relevant to trying to deflect them). The second group is a “space mission planning advisory group” — comprised of engineers, astronauts (and cosmonauts, and maybe taikonauts), and other representatives of various countries’ space agencies — to plan potential responses to threats. It’s a good start, but some experts feel it’s moving too slowly (surprising no one familiar with the United Nations).

For now, it would probably fall to the few countries with advanced space-launch technology and powerful ballistic kinetic weapons — the United States and Russia, most prominently — to try to divert an incoming NEO. In testimony presented to Congress in 2007, NASA proposed two broad categories for methods to deflect an NEO: impulsive technology, which would use explosives to alter the object’s course; and “slow push” technologies, which would use everything from directed solar energy to gravity wells to gradually shift the object away from impact with Earth. The effectiveness of these methods would depend on the size of the NEO and the time available — and as NASA cautioned in its report, much of the technology is years from being ready for launch.

Experts’ best estimates for the time necessary to successfully divert an NEO from hitting the planet is, at bare minimum, two to three years, although five years is probably more realistic. Given that it’s impossible to get a three-mile hunk of rock hurtling through space to make a 90 degree right turn, small deflections far from Earth are required. And it takes time to prepare a spacecraft and fly it out to meet an asteroid deep in the solar system. With many of the slow push technologies still years away from being practicable, it would require brute force — either crashing a spacecraft into the object or altering its course with nuclear explosions (delivered by unmanned rockets, not oil crews). Here there be legal trouble, though: using nukes would technically violate the U.N. Treaty on Principles Governing the Activities of States in the Exploration and Use of Outer Space.

At this point, say experts, we’re not quite ready to muster an international effort to save the planet from space rock disaster. But at least governments are getting more serious about the problem and taking the responsibility for detection from armchair astronomers. And should we all make it past December 21, 2012, don’t start celebrating just yet. 4179 Toutatis, the three-mile wide asteroid that passed by yesterday, will be zipping by again in four years.

How the United States Handed China its Rare Earth Monopoly