How did the phrase become shorthand for Washington's embrace of budget brinkmanship?

By now, you’ve probably heard enough about the “fiscal cliff” to know all about the steep, automatic tax hikes and spending cuts that U.S. lawmakers are now scrambling to prevent from taking effect. Even if financial catastrophe is averted, however, the term itself is likely to stick around; it has already become shorthand for the increasingly dramatic measures U.S. leaders have taken to force parties with increasingly divergent visions of the size and scope of government to resolve a steady drumbeat of high-wire budget crises. Think of the cliff as Washington’s version of the poison pill: making it more painful for politicians to do nothing than to work together to reduce America’s debilitating debt and deficits. And that kind of budget brinkmanship isn’t going away anytime soon. If anything, the phrase may now be going global, a sort of unwelcome U.S. export to the rest of the democratic world. 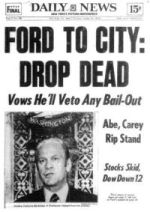 1985
The Gramm-Rudman-Hollings Balanced Budget and Emergency Deficit Control Act demands that automatic, across-the-board spending cuts take effect if the federal government misses budget targets, in the first congressional effort to build a fiscal time bomb that will compel both political parties to get serious about balancing the budget. “It’s a kind of mutual-assured-destruction theory of fiscal policy,” a House Budget Committee staffer explains of the radical new process, known as “sequestration.” “What they’re doing is they’re creating a kind of artificial crisis.”

1991
Rep. Henry Waxman (D-Calif.), who at the time heads a congressional subcommittee overseeing Medicaid, becomes the first major politician to use the precise phrase: Oregon, he warns, is “about to fall off the fiscal cliff” because of a decision to limit property taxes, which could reduce state revenues to the point where local leaders are forced to cut medical services to the poor under a Medicaid reform plan.

1995
Shortly after House Republican leader Newt Gingrich rides his “Contract with America” to victory in the 1994 midterm elections and a presidential commission releases a report on entitlement and tax reform, the media starts applying the term “fiscal cliff” to the U.S. federal budget. In an article on the enormous pressure entitlement programs will come under as nearly 80 million baby boomers retire, the San Francisco Chronicle reports that the country will plunge “off a fiscal cliff around 2010” even if a Republican plan to balance the budget by 2002 succeeds. “The pain required to keep the deficit at zero is much, much bigger than anybody is talking about publicly,” economist Laurence Kotlikoff tells the paper. 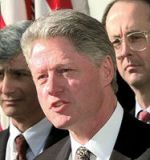 1998-1999
During a period of dizzying economic growth, President Bill Clinton and the Republican-controlled Congress balance the federal budget for the first time since 1969. Clinton vows to parlay the country’s budget surpluses into reforming Social Security and Medicare. But the administration’s costly proposals, including an ultimately unsuccessful prescription-drug benefit, anger deficit hawks. “Only in America could one define reform as increasing spending on a program known to be heading over the fiscal cliff,” the Cato Institute’s Doug Bandow laments.

2002
Rep. Charles Rangel (D-N.Y.) balks at President George W. Bush’s proposal in his State of the Union address to make permanent a $1.3 trillion tax-cut package enacted in 2001, especially given the administration’s free-spending ways. If the cuts are extended beyond their 2010 expiration date, he warns, their cost “will be far greater” than those of Social Security. When that happens, he adds, “we fall off a fiscal cliff.”

2003
The Bush administration forecasts a record $455 billion budget deficit after initially predicting a $334 billion surplus for the year, angering deficit hawks like Sen. Kent Conrad (D-N.D.), who warns that Bush’s tax cuts will “explode” at the very moment when the baby-boom generation is retiring. “This president is running us right over the fiscal cliff,” Conrad complains. “The president says he wants to go to Mars. He’s taken the deficit to the moon.” That same year, the White House launches a second round of tax cuts and the budget-crushing war in Iraq.

2008
Just weeks after the presidential election — and only months after the collapse of Lehman Brothers sparks a global financial panic and plunges the United States into its worst economic crisis since the Great Depression — the term’s use as a rhetorical cudgel shifts parties as Sen. Jim DeMint (R-S.C.) attacks President-elect Barack Obama and his economic stimulus plan for the first time. “We are trillions of dollars in debt and Obama’s massive new spending program threatens to send our nation over a fiscal cliff, leading to higher taxes and fewer jobs,” DeMint argues.

November 2010
An ascendant Tea Party movement — led by DeMint, among others — helps the Republicans retake the House in the midterm elections. “We are headed toward a fiscal cliff,” Rep. Jeff Flake (R-Ariz.) says a month later, when a bipartisan presidential deficit commission collapses. “I think Congress seems to have the political courage [to address the deficit] only when we are right at that cliff. The difficulty is we don’t know where that cliff really is.”

December 2010
Obama strikes a deal with Republican lawmakers to extend all the Bush tax cuts until Dec. 31, 2012, even though congressional Democrats want to limit the tax cuts to just the middle class. “I’ve said before that I felt that the middle-class tax cuts were being held hostage to the high-end tax cuts,” Obama says. “In this case, the hostage was the American people, and I was not willing to see them get harmed.”

July 31, 2011
After a bitter standoff, Democrats and Republicans avert a sovereign default by reaching an eleventh-hour agreement to raise the country’s debt ceiling. Drawing on the decades-old “sequestration” procedure, Vice President Joe Biden and Senate Minority Leader Mitch McConnell agree that if a special bipartisan “supercommittee” can’t get a deal by November that trims the budget by more than $1 trillion over 10 years, then steep, automatic spending cuts — split evenly between defense and domestic spending, with exceptions for some major federal programs like Social Security — will take effect on Jan. 2, 2013, just after the Bush tax cuts expire.

Aug. 5, 2011
Days after the debt-ceiling deal is reached, Standard & Poor’s downgrades the U.S. credit rating for the first time in history. “[T]he effectiveness, stability, and predictability of American policymaking and political institutions have weakened at a time of ongoing fiscal and economic challenges,” S&P explains.

November 2011
The supercommittee fails to reach a deficit-reduction agreement, triggering the Jan. 1, 2013, deadline — and a flurry of finger-pointing.

February 2012
In a congressional hearing, Federal Reserve Chairman Ben Bernanke helps popularize “fiscal cliff” as a catchall term for the deficit-reduction showdown that U.S. leaders have set in motion. “Under current law, on Jan. 1, 2013, there’s going to be a massive fiscal cliff of large spending cuts and tax increases,” he observes. “I hope that Congress will look at that and figure out ways to achieve the same long-run fiscal improvement without having it all happen at one date.” By March, Bernanke will embrace the phrase as his own, referring to “what I’ve termed a ‘fiscal cliff.'”

May 2012
The Congressional Budget Office reports that though the fiscal cliff would reduce the federal budget deficit by $607 billion, it would also heighten the risk of another recession by causing the U.S. economy to contract at an estimated annual rate of 1.3 percent in the first half of 2013.

November 2012
The day after the U.S. presidential election, traders concerned about the fiscal cliff deal the Dow Jones industrial average its biggest decline of the year. As financial-news network CNBC adopts a new slogan — “Rise Above” — in support of a bipartisan deal on the fiscal cliff, liberals back away from the term “fiscal cliff,” arguing that the loaded phrase is overly alarmist. The Economic Policy Institute suggests “fiscal obstacle course”; MSNBC anchor Steve Kornacki proposes “gradual fiscal slope”; and the Washington Post‘s Ezra Klein endorses “austerity crisis.” Whatever you call it, the budget standoff has proved to be a pivotal test of America’s paralyzed political system.