Here at Killer Apps we are always on the lookout for new, um, killer apps, and this year we saw a lot. Here's a list of five of the most interesting weapons that came to our attention in 2012. These systems either were invented in the last year or achieved a significant milestone on the road to becoming operational weapons. Look out, 2013. 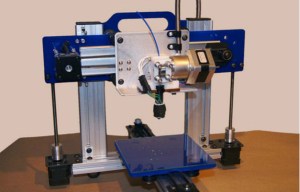 Here at Killer Apps we are always on the lookout for new, um, killer apps, and this year we saw a lot. Here’s a list of five of the most interesting weapons that came to our attention in 2012. These systems either were invented in the last year or achieved a significant milestone on the road to becoming operational weapons. Look out, 2013.

First up: the printed gun. While today’s 3D printers can only print guns capable of firing six shots before they fall apart, who knows there this technology will be in five or 10 years and what it will mean for worldwide conflict if anyone can print an assault rifle. As we reported recently, the U.S. military is already looking at 3D printing as a way of reducing the amount of gear carried by troops. While some 3D printer manufacturers are cracking down on customers who try to build weapons with its devices, the cat is already out of the bag. Gun enthusiasts have already set up an alternate website hosting instructions — blueprints? — for making guns via 3D printers. 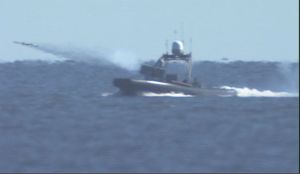 Next is the U.S. Navy’s remote-controlled, missile-firing boat, formally known as the unmanned surface vehicle precision engagement module (USV-PEM). Right now, the system is made up of a 36-foot speedboat with night vision and infrared cameras and armed with a .50 caliber machine gun or six Israeli-made Spike missiles. In late October, the USV-PEM — a collaborative venture between the U.S. and Israel — successfully fired six Spikes. The unmanned boat is piloted by a crew sitting in a control station that’s either ashore or on a mothership. The craft is pretty much designed to defeat swarms of small, explosives-laden speedboats attempting to overwhelm the limited defenses that large ships have against such vessels. Keep in mind that U.S. Navy planners are worried that Iran would use such “swarming” tactics against the sea service in any conflict in the Gulf. 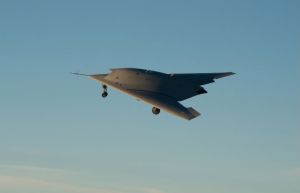 We’ve been hearing plenty about stealth UAVs over the last two years. As military planners around the world realize that today’s crop of small, slow, propeller-powered drones will last about as long as a Cessna in a high-end war, they are scrambling to develop a generation of fighter-sized, unmanned stealth jets. France recently joined the U.S. as the second nation to fly a full-size stealth UAV when its nEUROn took to the skies on Dec. 1. The Dassault-made drone is designed to carry sensors and weapons and, interestingly, it has twin-wheeled nose landing gear, a feature usually found on carrier-based aircraft (ground-based jets usually have only one wheel on the nose gear). The nEUROn will soon be joined by the BAE Systems-made Taranis and possibly the Russia’s MiG SKAT (seriously). 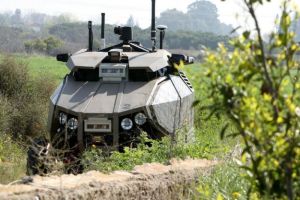 Not content to just develop sea-borne armed drones, Israel has been quietly fielding a fleet of ground-based killer robots. The Guardium is an armored desert buggy (we say it looks like a juiced out Smart Car) equipped with a number of sensors and weapons. The little cars can patrol autonomously, use their sensors to automatically identify threats, and, as the Israel Defense Force says, “use various forceful methods to eliminate” those threats. That’s right, the Guardiums (Guardia?), which are prowling Israel’s border with Gaza, can operate on their own, albeit with human oversight. The robots can “react to unscheduled events, in line with a set of guidelines specifically programmed for the site characteristics and security routines,” according to their manufacturer, G-NUIS Unmanned Ground Systems. (This is exactly the kind of unmanned weapon that Human Rights Watch is getting extremely concerned with.) While the U.S. military is conducting very limited tests of unmanned jeeps to haul supplies for troops on patrol in Afghanistan, the Guardium may well be the world’s first operational armed ground drone. 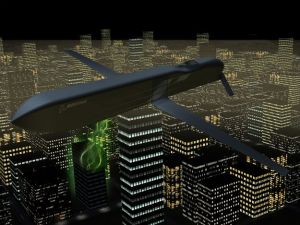 Finally, let’s look at the Counter-electronics High-powered Microwave Advanced Missile Project (CHAMP), or what we like to call Boeing’s flying blackout. The missile is designed to fly over a target — be it a building or a neighborhood — and rather than blow it to smithereens it temporarily knocks out all electronics nearby.  Boeing and the U.S. Air Force test flew CHAMP in October over the Utah desert. The missile flew an hour-long circuit over a building filled with computers. Their screens all went black as CHAMP flew over while emitting a blast of high-power microwaves. You can imagine how useful such a weapon would be in taking out an enemy’s air defense radars, communications systems, or anything else requiring power. It will be interesting to see whether the Air Force continues to invest in CHAMP given that its capabilities seem to mimic what we’re constantly being told can be accomplished with a keystrokes by a skilled cyberwarrior operating from the comfort of the NSA’s Maryland headquarters.

John Reed is a national security reporter for Foreign Policy. He comes to FP after editing Military.com’s publication Defense Tech and working as the associate editor of DoDBuzz. Between 2007 and 2010, he covered major trends in military aviation and the defense industry around the world for Defense News and Inside the Air Force. Before moving to Washington in August 2007, Reed worked in corporate sales and business development for a Swedish IT firm, The Meltwater Group in Mountain View CA, and Philadelphia, PA. Prior to that, he worked as a reporter at the Tracy Press and the Scotts Valley Press-Banner newspapers in California. His first story as a professional reporter involved chasing escaped emus around California’s central valley with Mexican cowboys armed with lassos and local police armed with shotguns. Luckily for the giant birds, the cowboys caught them first and the emus were ok. A New England native, Reed graduated from the University of New Hampshire with a dual degree in international affairs and history.

NEW FOR SUBSCRIBERS: Want to read more on this topic or region? Click + to receive email alerts when new stories are published on Military, Security, Economics, Science and Technology

How a Plea Bargain for Netanyahu Could Realign Israeli Politics

Why Has Biden Stopped Pushing for Arab-Israeli Peace?

How a Plea Bargain for Netanyahu Could Realign Israeli Politics