Edge of the World

For one journalist embarking on a seven-year journey to retrace the footsteps of early humans, the biggest obstacles are man-made.

Previous: Matthieu Aikins on traveling the Pakistan-Afghanistan border by truck.

Early this year, in the company of camel nomads from Ethiopia’s desolate Afar region, I’m planning to walk out of Africa. This dusty jaunt will be the first leg of a seven-year journey — north into the Levant, east to Asia and Siberia, and down the length of the Americas to Patagonia — to retrace by foot the first global human diaspora out of our mother continent some 50,000 to 70,000 years ago. It’s a long-wave experiment in ambulatory journalism that I’m calling “Out of Eden.” Although my ramble will feature few of the hurdles faced by our wandering ancestors — predators bigger than Volkswagens, for instance, or ice sheets covering Alberta — it won’t lack for obstacles. 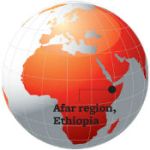 Maddeningly, the toughest will be largely imaginary: political borders. I’ll bump into at least three dozen along my route. Some will be impassable. In Africa, for example, I’ll steer clear of the frontiers of volatile Somalia. On the Arabian Peninsula, the margins of simmering Yemen are out of bounds. And in the Middle East, there’s Iran. It straddles our primordial trail into Central Asia. I just hope bilateral relations improve by the time I hit the Zagros Mountains in, say, the summer of 2015. Iran’s a big place to plod around.

“Ironical, isn’t it?” commiserated Meave Leakey, the famous paleoanthropologist and one of my project’s many informal advisors. “Getting out of Africa is as hard today as it was the first time we left.”

Borders are perversely enduring artifacts in our globalized era. Remember how, after the Cold War, many pundits declared them passé? A cooperative New World Order was supposedly dawning — albeit one conveniently supervised by Washington — where grim frontier no man’s lands would be recycled into jogging paths. (Indeed, as far back as 1940, one giddy U.S. general went so far as to announce the death of the “popular fetishism of sovereignty.” Ah, innocent times.)

True enough, most of Europe is navigable today after just one passport check. And a shared monoculture of cheap consumer goods now engulfs the habitable planet courtesy of powerful and stateless corporations. (I’ve sipped Nescafé instant coffee brewed by Pygmy hunter-gatherers in the rain forest of Congo.) The information superhighway, meanwhile, mocks almost any conceivable barrier an isolationist government can hope to throw up to block it, whether Hesco containers, concertina wire, minefields, or censoring technology. There’s just no corralling the web’s border-hopping ones and zeros.

Yet borders aren’t fading away. Quite the opposite. Even before the 9/11 attacks exposed the existential threat of global terrorism — never mind the borderless dangers of narcotics trafficking, the illicit weapons trade, cyberwarfare, and people smuggling — most countries were already hardening their edges. At the same time, strange new metaborders have also appeared, multiplying at crazy angles. Instead of new maps showing a globalized world, we navigate a jigsaw mosaic of competing interests. The Berlin Wall has been replaced by an emerging politico-economic front line between Beijing and Washington that zigzags murkily through the South China Sea. Journalist Eliza Griswold has drawn a depressing new theological divide between Islam and Christianity along the Earth’s northern 10th parallel. To that invisible line I would add the tropics of Cancer and Capricorn: divides that cleave hundreds of millions of temperate-zone haves from the migratory aspirations of billions of subtropical have-nots. Humanity has been boxing itself into a warren of proliferating cliques — tribes, languages, nations — ever since we hit our prehistoric land’s end in Tierra del Fuego. We have a limbic weakness for borders.

The only consolation amid all this fractiousness is that old-fashioned borders provide an honest picture, at least, of the countries that rub edges with each other. They are unforgiving mirrors. Want to understand a government’s true nature? Gambling on a nation’s rise or fall? Don’t visit capital cities. The grassy malls and marble colonnades you find there are by definition symbolic — an idealized facade. Make your way instead to the unseen and unsightly back alleys where the grittier business of statehood is transacted. Go to the borders. You learn a lot among the grabby touts and squinting money-changers at charmless frontiers. Which side of the international boundary deploys more idle soldiers? Which way do they face? Where does the net flow of goods surge, and how many of them are taxed? Which country’s immigration office has the longest — and most patient — entry queues?

“I have always felt that the action most worth watching is not at the center of things but where edges meet,” says the writer Anne Fadiman. “I like shorelines, weather fronts, international borders. There are interesting frictions and incongruities in these places, and often, if you stand at the point of tangency, you can see both sides better than if you were in the middle of either one.”

MY FAVORITE BORDER has always been the world’s oddest perimeter. It’s the threshold of home: the United States-Mexico line. I hardly recognize it anymore.

Not long ago, while out feeding horses in a corral in West Texas, on a parched ranch close to the Rio Grande, I heard an unplaceable sound. It was strange yet familiar, like a lawn mower in the desert. Squinting finally up into the chrome-bright sky, I spotted a Predator drone. It was my first one since Iraq.

This growing militarization of the U.S.-Mexico border has an elegiac quality about it that transcends nostalgia for a time when this 2,000-mile-wide doorway between two sister republics was congenially open. Ultimately, the slow but steady closing of the United States’ vast southern frontier says less about Juárez’s narco-violence or the jobless rate in Phoenix than it does about the end of an era of exceptionalism in the United States. The fences of I-beams rolling across the desert now seem almost provisional, an artifact of hindsight, a theatrical gesture against demographic and cultural reality.

With Mexican cowboys in the Sierra Madre tucking Sam’s Club cards into their wallets and U.S. politicians struggling through slogans in Spanish, it would be impossible for author Graham Greene to marvel, as he did nearly 75 years ago in Laredo, Texas, at the otherness of la frontera: “The atmosphere of the border — it is like starting over again; there is something about it like a good confession: poised for a few happy moments between sin and sin.” Not anymore.

As for the borders interrupting my long walk, I’ll be supple and patient. Some will be merely a line of rocks across a salt plain. Others will be triple-fenced minefields. Most, like X-ray body scanners at ports of entry, will peel away my skin. This is what borders do. Denied passage, I’ll simply pivot and trudge in another direction, much as our roving ancestors must have done 2,000 generations ago. Scientists have their pet theories about this, of course.

The prevailing hypothesis holds that we unwittingly conquered the Earth by walking along the margins of the seas, lured onward by a bifurcated horizon. Erik Trinkaus, an ancient-migration expert at Washington University in St. Louis, doesn’t truck with this shoreline idea. We spread inland across virgin continents, he believes, shrewdly exploiting the places where major ecosystems met. “The transition zones between mountains and plains, wet and dry regions, that’s where the greatest diversity of foods was,” says Trinkaus. “That’s what offered us the greatest fallback on resources.”

Either way, it seems from the very beginning, we sought, found, and hewed to borders.

Next: Peter Chilson on waiting out the coup in Mali.