"Arab Winter" is a stupid slogan and the West needs to get over its China fixation, says France's most prominent intellectual. 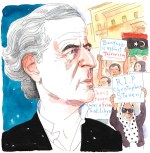 Bernard-Henri Lévy, the globe-trotting, chisel-jawed French intellectual known universally by his initials, BHL, is a fixture on the Left Bank salon circuit, where political philosophers are still treated (at least occasionally) like rock stars. But he has also made his share of enemies, not least in the United States, where his critical 2006 book, American Vertigo, annoyed some impassioned defenders of the New World. He’ll admit he has gotten a few things wrong in his time (like citing a fake philosopher in a 2010 critique of Immanuel Kant), but he’s adamant that convincing French President Nicolas Sarkozy to help oust Libyan dictator Muammar al-Qaddafi in 2011 wasn’t one of them. An advocate of a kind of heroic humanist activism, he now laments the world’s callous inaction in Syria.

My hard work on Libya brought the opposite of epiphanies. It reaffirmed what I already knew: that the international community’s natural tendency is to do the least possible and that democracies don’t defend their own values — and, inversely, that the determination of a handful of individuals, including a head of state, such as Nicolas Sarkozy, can help to change everything and make history. History usually repeats, but it can be changed.

I don’t regret what the international community and France did in Libya for a moment. People who say that things aren’t going very well in Libya today are scandalously imprecise. It isn’t the failure that they describe. The Islamists lost the election. The prime minister is a pro-Western democrat. When Ambassador Chris Stevens was assassinated, an event that personally shook me up, it was terrible. But the next day, civil society poured into the streets, demanding to know what really happened, to seek justice and punishment for his killers. Crowds in the streets carried large signs saying, “Stevens was one of ours; he was a brother.”

This talk of an “Arab Winter,” it’s a stupid slogan. People who say that have a secret wish for it to be true. They like order; they don’t want things to change. Similar people said the same during the Soviet era. And when it finally collapsed, they pretended things were worsening then too.

We live in an era that was born with the fatwa against Salman Rushdie, was followed by the assassination of [Afghan resistance leader Ahmad Shah] Massoud, and continued with the beheading of Daniel Pearl. Thanks to Barack Obama and the killing of Osama bin Laden, it is now clear that Pakistan is in the very eye of the storm. Obama broke Pakistan’s trust by finding bin Laden and taking action. This transforms the whole fight against terror. You couldn’t truly fight terror while working with Pakistan, the greatest shelter for terrorists.

The election of Obama was the best way to keep America’s place in the world. It will never be what it was, of course; the world has changed. Faith in America, and in being American, remains intact. This is good news. But when you travel across America, when you take the trains and drive on its roads, when you visit cities in the middle of the country, the dismal — even rotting — state of American infrastructure is surprising.

We must get over this China fascination. You cannot build a thriving economy when deep inequalities are beyond a certain level. It creates too many problems. This belief that a great China will surpass America is the result of a strange European and American form of masochism. America has far more vitality than China, a country that is not becoming a counterweight to the United States. Chinese power is greatly overestimated, given the moral weaknesses of a country where the people still live in a state of terror.

Federalism or death is the future for Europe. In 10 years, Europe will either become like the United States or it will disappear from the political map.