The War Before the Last War

A tiny southern peninsula still bears the wounds of Iran vs. Iraq.

Previous: Peter Chilson on waiting out the coup in Mali.

I decided to start in the south, checking the conditions at the river border between Al Faw, Iraq, and the Arab province of Khuzestan, Iran. Al Faw is a tiny teardrop of land between Iran and Kuwait, and its northern border with Iran is the last few miles of the Shatt al-Arab waterway, which demarcates the southernmost border of Iraq and Iran, stretching between Basra and the Persian Gulf. The river is narrow enough that my mobile phone chimed periodically to let me know that I would be charged roaming rates on MCI, the largest Iranian cell-phone network, if I made calls. 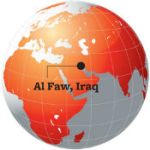 Without Al Faw and the nearby port of Umm Qasr, on Iraq’s border with Kuwait, Iraq would have no outlet or claim to the sea. So the Shatt al-Arab became the scene of intense fighting in the Iran-Iraq War, with Iran seizing it in 1986 and holding it for another two years. During that time the whole peninsula was militarized and its population sent packing for other Iraqi cities. Some Fawis eventually returned, and other Iraqis were induced to move there to repopulate the place. An Iraqi in the nearby city of Basra told me that the whole peninsula had been battered with artillery during that back-and-forth, so that “not a single square meter was untouched by fire.”

On the summer days when I visited, the heat felt like napalm burning the air. The peninsula was quiet, with most everyone inside sleeping through the noonday sun. The only ones outside were the real natives, the fishermen docked across the river from Iran — them, and the bushlambo, a species of Persian Gulf mudskipper that is abundant in Al Faw and flapped merrily around the boats’ wooden hulls. The bushlambo presumably had no idea how terribly hot their home was, though the humans had spent enough time in exile that I would have expected them to know better.

“Al Faw was a paradise on Earth,” said Musa Yaqub Abdullah al-Rashid, 58, about his home before the war. He had returned two years after the occupation. “There was fishing. There were date farms.” Now, he said, the place remained wrecked, not just by the war, which reduced every structure to rubble, but also by the ongoing machinations of the Iranians, whose flag was visible across the water. On the road into Al Faw from Basra, one could see government projects to provide fresh water. Fawis said that the water that once fed the date farms had turned brackish due to Iranians’ diverting rivers from the area and thereby making the farmland unusable, as if to salt the fields of the conquered, even decades after the conquest.

Jawhar Talib Jawhar, 51, the captain of a boat called the Ishtar, said that the waters around Al Faw had once been prime fishing grounds and that in his youth he could slip across the national border to poach fish or even visit the Arab Iranians on the other side. After the war, the border had become fixed and inviolable. That Iranian flag in the distance marked a patrol that would instantly come to intercept him if he chased fish too close to the Iranian side. “They detain us, and they treat us badly,” he said, adding that the Kuwaitis were much worse, though their waters were correspondingly richer in fish and therefore worth violating now and then.

In a way, though, the old men of Al Faw had been spared the worst of the war. Their land had received the scorched-earth treatment, and on their return it was essentially a new place, with every vestige of the old removed, and indeed every vestige of the Iranian occupation removed as well. The land is now a palimpsest whose best version has been rubbed out and scribbled over in multiple drafts, leaving little even to remind of the fight that did the initial rubbing and scribbling.

Next: Matthieu Aikins on traveling the Pakistan-Afghanistan border by truck.