FP's "Who Won the Great Recession?" package elicits reflections on U.S.-China power dynamics and how to succeed in business during hard times. 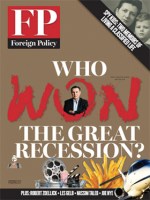 Most political observers in China today might qualify as what Joseph Nye calls “declinist pundits,” those who have seized the recent U.S. economic recession as proof of America’s diminishing global power (“Who Won the Great Recession?” November 2012). Indeed, this has been the case throughout the history of the People’s Republic. The first time I ever heard the Chinese word Meiguo (“United States of America”) as a schoolboy in the 1950s, I was taught that U.S. imperialism is merely a paper tiger. In 1957, Chairman Mao Zedong argued that the Soviet-led Eastern bloc had triumphed over the U.S.-led Western world, proclaiming that “the East Wind prevails over the West Wind.”

In the 1960s and 1970s, Beijing concluded that the United States was in decline and on the defensive, while the Soviet Union was on the rise and expanding its power and influence. Since the 1980s, China has held the view that the world is moving toward “multipolarity” as U.S. power inevitably wanes while other powers ascend. Some Chinese observers are intoxicated by the notion of a “G-2” — that the United States and China are No. 1 and No. 2 in the world today and that before long China will maneuver its way into the top spot. In fact, although sobering and sophisticated Chinese assessments of U.S. power appear in scholarly journals, university classrooms, and foreign-policy deliberations, characterizing the United States as a declining hegemon is almost a form of political correctness in China.

My own evaluation is that the United States reached the peak of its power in the late 1990s, when its share of the global economy was nearly 30 percent. President Bill Clinton presided over the longest period of peacetime economic expansion in U.S. history, as the federal budget surplus grew to $236 billion by 2000. But the wars in Afghanistan and Iraq after 2001 and the financial turbulence after 2008 severely eroded American strength. The federal budget deficit is now estimated to be above $1 trillion, and the U.S. economy accounts for only about 20 percent of the global economy amid rapid economic expansion in China, India, and other developing countries. In his 2002 book, The Paradox of American Power, Nye argued that military might alone would not offer the United States much leverage in the world and that the country should instead take advantage of economic interdependence and information flows to create “soft power.” Unfortunately, for a few years at least, U.S. leaders did not follow his advice.

As I see it, America’s global power is still at its peak, but the peak is a flat-topped mountain that goes gently up and down for a long time. The United States will eventually step down from its sole superpower position. But we have not yet witnessed that moment, and we don’t know when it will happen.

Wang Jisi is one of China’s most distinguished analysts. He may underestimate the benefits of immigration and technological change (particularly in energy) for America’s future, but I find it difficult to disagree with his analysis. It is interesting to note the parallels in Chinese and American beliefs in U.S. decline. In the 1960s, Americans thought the Soviets were 10 feet tall; in the 1980s, it was Japan; today, China.

All this would be merely a matter of amusement if misleading perceptions did not sometimes engender dangerous policies. Thucydides reminds us that the Peloponnesian War was caused by the rise of Athens and the fear this created in Sparta. Misperceptions of American decline that lead to Chinese hubris and excessive American fear could produce disastrous mistakes. Fortunately, an important member of the new “fifth generation” of Chinese leaders recently told me that he believes America will remain ahead of China for 30 to 50 years and thus cooperation is imperative. Let us hope that his (and Wang’s) views prevail in a period of rising nationalism.

With many Americans still suffering as we slowly recover from the recession, the editors of Foreign Policy (“Who Won the Great Recession?” November 2012) performed a valuable service by pointing out that some institutions have prospered during these hard times. As the Boston Consulting Group’s research has consistently shown, the future belongs to those who take advantage of less confident, frozen competitors.

Even during the Great Depression, some American companies experienced remarkable growth. DuPont, for example, increased research and development expenditures 93 percent between 1930 and 1939, yielding numerous innovations. Eight years after the company introduced neoprene, the first synthetic rubber, to the market in 1931, virtually every U.S.-made automobile and airplane contained neoprene parts. DuPont also introduced nylon, the first synthetic fiber, in 1938 and discovered a blockbuster application for the material in 1940: women’s stockings.

During the same period, IBM launched three times as many products as it had during the 1920s and twice as many as it would during World War II. Recent recessions have yielded similar examples, and we need to learn from them.

The economy of the future will operate at two speeds: the slow-growth West and solid-growth rest. In the United States and other developed countries, most consumers want high-tech products with all the latest features. In the developing world, by contrast, consumers want simple products they can afford. The company best able to provide customers with the lowest-cost products at every value point is the company most likely to succeed in the years ahead.

We estimate that approximately 1 billion people have risen from poverty in China and other rapidly developing economies in recent years, becoming consumers for the first time. Millions more are moving into the middle class. Companies need products for these booming markets. In fact, four of our colleagues predict in a new book that the Chinese and Indian economies combined will be a $10 trillion-per-year consumer market by 2020. They call this the “$10 Trillion Prize.”

American companies that hope to share in this huge new market need to shrug off the funk and go on offense. In today’s slow-growth economy, those who act are most likely to win.