How dictators and monarchs celebrate themselves. 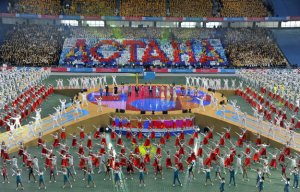 Every year, the United States designates the third Monday in February as a national holiday to honor both George Washington and Abraham Lincoln. But aside from doing a litte sale shopping, most Americans don’t celebrate the holiday in any significant way. In fact, many don’t even know whom the holiday commemorates, and sitting U.S. presidents certainly don’t honor themselves. (Obama did spoil himself a bit this year by playing a round of golf with Tiger Woods.) But that’s not the case everywhere in the world. Here’s a look at six countries where current leaders celebrate their birthdays publicly — and very often in extravagant style.

In 2008, Kazakh President Nursultan Nazarbayev signed a decree to make his birthday a national holiday. Though July 6 is officially called “Astana Day” to mark the day Astana became the nation’s capital in 1997, many in the country see the holiday as an excuse to celebrate the birthday of the Kazakh president, who has led the central Asian state since the fall of the Soviet Union.

Some observe the holiday with enthusiasm, but others are less than comfortable with the cult of personality that appears to underlie the lavish celebrations — especially in a country where a university as well as many parks and squares bear the name of the longtime president.

“This is a huge waste of money and pompous precisely because Astana Day and Nazarbayev’s birthday are the same day,” one Astana resident declared in 2010. “They are constantly driving into my children at school that Nazarbayev is our everything.”

In 2010, the three-day birthday festival kicked off with the opening of a giant indoor park (giant as in containing a multistation monorail and an amusement park featuring “human pinball” and a log flume ride, among other attractions). The Italian tenor Andrea Bocelli sang (in 2008, it was only Whitney Houston), and seven presidents plus the king of Jordan were in attendance. In total, the celebratory circuses, ballets, and fireworks cost Kazakhstan more than $10 million. (That same year, the country observed an elaborate First President’s Day to mark the anniversary of Nazarbayev’s first election in 1991. “Kazakhstan Celebrates First, And Only, President,” NPR cheekily observed.)

Last year, the Astana Day celebration included an international film festival, a Cirque du Soleil performance, several concerts, and an ice show. But if you think that this sounds just a little bit Nero-esque, think again, at least according to government leaders. “There is nothing surprising here,” one official argued in 2010. “All nations pay tribute to their presidents.”

Nazarbayev, who has repeatedly won (widely criticized) elections with more than 90 percent of the vote and changed the law to personally exempt himself from term limits, could be celebrating his birthday in style for many years to come — especially if his quest for the elixir of youth works out.

In the photo above, artists perform in honor of Kazakhstan’s First President’s Day in Astana on Dec. 1, 2012. 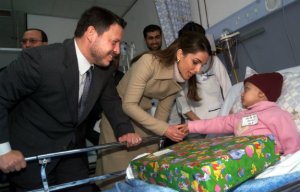 One of the distinguished guests at Nazarbayev’s Astana Day celebrations clearly has different ideas about how his country should commemorate his birthday. Jordanians have been celebrating King Abdullah II’s birthday since he succeeded his father King Hussein in 1999, but the day used to be a national holiday (along with Hussein’s birthday). In 2007, however, King Abdullah announced that in order to boost productivity, banks and businesses would remain open on the two royal birthdays.

“As sincere work and dedication are key to economic prosperity, every single day of our work time brings in new opportunities for more achievements and investment and opens new areas for creativity and development,” the king said. “We found that my birthday and the birthday of my father, the late King Hussein, should be another two days of official work … and hope that Jordanians can celebrate the two occasions with more productivity.”

Today, Jan. 30 is a cause for celebration in the country, but it is also a workday. And King Abdullah himself prefers to celebrate with family rather than with famous singers and foreign dignitaries.

Above, Jordan’s King Abdullah and Queen Rania give a present to a child being treated for cancer on Jan. 29, 2002 in Amman. The monarch marked his 40th birthday by visiting children undergoing cancer treatment. 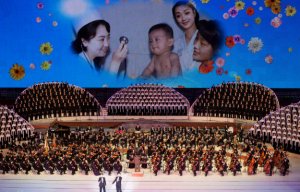 Earlier this year, Kim Jong Un showed the world that giving can be more satisfying than receiving. According to state media, the North Korean supreme leader commemorated his Jan. 8 birthday — which has yet to be designated a national holiday — by distributing 1 kilogram of candy to every North Korean child under 10. Even villagers in outlying islands received the treats — they “exploded with joy” when they saw the gifts, according to the official report.

If Kim Jong Un is looking to nurture his personality cult, he’s on the right track. Both his father and grandfather reportedly demonstrated their “paternal love” for the youngest generation of North Koreans by giving away “birthday candy” and other household staples such as eggs (and cigarettes). Today, both former leaders have their own national holidays — the “Day of the Shining Star” commemorates Kim Jong Il’s birthday while the “Day of the Sun” honors Kim Il Sung’s — and Kim Jong Un just honored his father’s birth anniversary on Feb. 16 by issuing commemorative stamps, visiting Kim Jong Il’s grave, sending wild honey to a maternity hospital … and testing a nuclear weapon. “Our soldiers and people celebrated the birth of our great leader after we showed our strength and braveness with the successful nuclear test,” the country’s state-run news agency declared.

Above, images are displayed on a screen as North Korean performers sing at a theater during celebrations to mark the 100th birth anniversary of Kim Il Sung in Pyongyang on April 16, 2012. 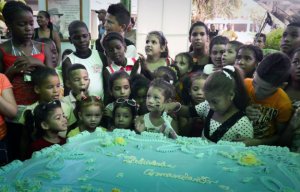 Ever since taking power in 1959, Fidel Castro has marked his birthdays with mass celebrations in Cuba. In 2011, for instance, a week of festivities culminated in a “Serenade to Fidelity” gala that included performances by artists from Europe and Latin America, including the Grammy Award-winning Omara Portuondo of Buena Vista Social Club fame. That same year, Castro celebrated the occasion with his erstwhile ally Hugo Chávez, who happened to be in Cuba for cancer treatment.

Castro did not make a public appearance on his birthday last year, but the country was content to celebrate without him. State media congratulated him, concerts were dedicated to him, and the Union of Communist Youth baked him a cake. Not even an art show depicting important moments in his life could bring him out into the public eye. But it was Castro’s party and he could hide if he wanted to.

Above, Cuban children gather around a cake dedicated to Fidel Castro’s 86th birthday on Aug. 13, 2012 in Havana. 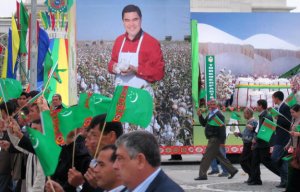 In 2005, on his 65th birthday, Turkmenistan’s former dictator Saparmurat Niyazov commemorated the occasion by issuing a set of coins featuring his family tree. A year later, Niyazov minted a set of gold and silver coins to honor his own poetry — four collections and two volumes of a work he called the “Book of the Soul,” which, according to the Guardian, offered “moral guidance, including respecting your elders, and giving lots of jewellery to women.” (Children studied the book in school and convicts swore their allegiance to it upon release from jail — that is, until Niyazov’s successor released his own spiritual guidebook to replace it.)

Niyazov’s birthday celebrations were lavish — the mandatory festivities dominated the news and involved parades, “concerts, horse races, and children in national costume praising their leader’s merits in both Turkmen and English.” In 2005, Niyazov received a chestnut-colored stallion as a gift.

Upon assuming power after Niyazov’s death in 2006, Gurbanguly Berdymukhammedov requested that his birthday not be celebrated as a lavish national gala and abolished the holiday honoring his predecessor’s birthday, but he still knows how to throw a birthday party. In 2011, for instance, he performed a love song that he had written himself. (After the performance, state television announced that the guitar, now a “national asset and great treasure,” would be preserved in a museum.) In 2012, festivities in the capital included elaborate musical numbers in Berdymukhammedov’s honor.

Above, people walk past a poster of Berdymukhammedov during an Independence Day parade in Ashgabat on Oct. 27, 2008. 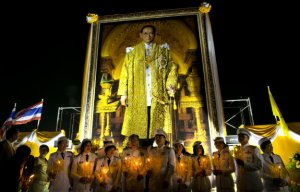 The king’s birthday isn’t the only occasion in which Thais have shown support for their sovereign, believed by some to be semi-divine, through fashion choices. In 2007, the world’s longest reigning living monarch emerged from a three-week stay at a hospital in Bangkok wearing a pink shirt and blazer. Within a day, sales of pink shirt had jumped 60 percent as Thais rushed to stores in the hopes of improving the aging king’s health.