Nigeria's finance minister on resource curses, African growth, and why America shouldn't be so smug about corruption. 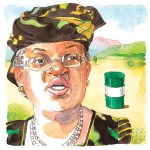 It was hardly the best of circumstances for an interview when Ngozi Okonjo-Iweala sat down with Foreign Policy in Washington, D.C., recently. In addition to jet lag, the Nigerian finance minister was battling both malaria and the flu. “Anyone else would be lying in bed right now,” she said wryly. But toughing through malaria might be easy compared with the Harvard- and MIT-trained economist’s day job: attempting to clean up Nigeria’s notorious corruption and cutting hugely popular subsidies in a country that has become the textbook example of the resource curse. It’s also a brutal place to be in public life: Just two days after this conversation, Okonjo-Iweala’s mother was kidnapped and held for ransom. (She was released after five days.) In a wide-ranging conversation, the former World Bank managing director — favored by many to run the organization, though Barack Obama stuck with tradition and nominated an American, Jim Yong Kim, last year — touched on the biggest challenges facing Nigeria, why she’s bullish about Africa, and why Americans shouldn’t be so smug.

There are similarities I’ve learned living both in the United States and Nigeria. The first is that the U.S. is a big country, and it’s very self-absorbed. The average U.S. person doesn’t really think about what’s happening elsewhere, to be honest. Nigeria is a large country too; we have 167 million people. And people there, too, are not really thinking of what’s happening outside. But we’re in the Internet age, and so domestic politics is no longer domestic, really. It’s international. I don’t think that has quite hit our politicians.

The big difference is that the United States, being a developed country, has strong institutions. In Nigeria — which is a much younger country, only about 50 years since independence — the lack of these institutions is to be understood. But it does make for a different way of doing business. Some of the things that are looked upon as corruption over there have found legal and professional names over here, in the United States. For instance, at home when people go to lawmakers and induce them with trips and gifts and so on to pass legislation, it’s called corruption. But in the U.S. it’s actually a profession called lobbying!

Look at what is happening to Africa in the midst of global uncertainty. It’s not a fluke. For almost a decade, the continent’s economy has been growing at close to 5 percent at a time of real global fragility. African policymakers, finally, are putting in place good economic policies and sound macroeconomic management. And throughout the crisis, they did not roll back these policies. The lessons have been learned.

What we now have to watch for is those countries just discovering big natural resources. In country after country on the continent, the issue is to make sure that the lessons learned from countries like Nigeria and Angola, in terms of how to manage this better, are quickly fed into the newly resource-rich countries, so that they can avoid the mistakes and learn the good lessons of management.

Many oil-dependent countries have populations that think, “Well, we’re rich now. Therefore we’re entitled to all sorts of subsidies like lower electricity prices and water subsidies, oil profits, and so on.” And these become dependencies. So governments need to manage those expectations and let them know that they’re not suddenly going to find big lumps of money on their doorsteps, but that the funds are going to be channeled into productive investment.

The first thing is to build strong institutions — the rule of law, fiscal management, savings. You need to keep your economy diversified. Nigeria went from an economy that was well diversified, with agriculture as the biggest industry, to a monoculture economy of oil. So we must manage the surpluses well. Channel them quickly into sound infrastructure investment — and into human investments. If you do those things right, then everything else will follow.