Charles Kenny is too quick to call off the clash of civilizations. 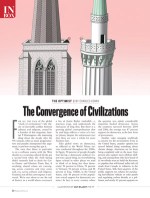 Talk of a global “clash of civilizations,” first propounded by Samuel P. Huntington in the early 1990s, has been criticized and debated for many years — and like the current vogue for the walking dead, the “clash” thesis refuses to lie down. In his article (“The Convergence of Civilizations,” January/February 2013), Charles Kenny takes aim at this thesis, arguing, quite rightly, that the West is not on an inevitable collision course with the Muslim world.

At the same time, however, it is unclear that “shared values are converging across countries,” as Kenny argues. The convergence thesis rests on the premise that repeated exposure to the ideas and images transmitted by Hollywood during the heyday of movies, CNN International during the 1980s, and YouTube and Twitter today will gradually undermine indigenous values and local norms. Consequently, many deeply conservative cultures fear that opening the floodgates to Western media will erode faith in religion, respect for marriage and the family, and deference toward traditional sources of authority. This argument, however, exaggerates the impact of, and access to, globalized mass communications and social media in many of the world’s poorer countries.

Evidence from the World Values Survey now covers almost 90 percent of the world’s population, and the data allow analysis of trends in public opinion since the early 1980s. The results reveal the stubborn persistence of substantial contrasts in values among rich and poor societies around the globe.

Religiosity, for example, persists most strongly among poor populations vulnerable to physical and other harms. At the same time, secularization and the concomitant eroding of religious practices, values, and beliefs have occurred most clearly among wealthy, secure demographics in post-industrial societies. Thus a large — and sometimes growing — values gap driven by socioeconomic conditions persists between religious and secular societies irrespective of Western communications.

Similarly, the residents of affluent countries have become far more liberal over time on a wide range of social values and matters of sexual morality, exemplified by issues such as tolerance of homosexuality and support for gay rights, attitudes toward marriage and divorce, and ideas about the appropriate role of the different sexes. In high-income countries, the prevailing norms concerning gender and sexual orientation are changing much more rapidly than in low-income countries, with the result that a growing gap is opening between these societies. As illustrated by the deepening schism in the Episcopal Church over the role of female religious leaders, poorer countries often sharply reject this liberalization as Western decadence.

Cultural values are deep-rooted, evolving over generations and even centuries, resting ultimately on levels of societal modernization and religious traditions. Thus Niger is not suddenly becoming transformed into Nicaragua — still less Norway. Many Americans like to imagine that the world is moving their way and adopting their values, but the evidence from the World Values Survey does not support this view — which may be reassuring to people in other parts of the world.

Pippa Norris and Ronald Inglehart are giants in the field of studying global values. Inglehart is the driving force behind the incredible venture that is the World Values Survey. So I’m very grateful not just for their reply but for all that they have done to make possible the study of global cultural convergence — or its absence.

Clearly, straying too far from their interpretation of the survey results is more likely an act of ignorance than insight. I think (hope) I don’t fall into that trap.

As Norris’s work illustrates, the gap between popular support for democracy and its underlying civil liberties — in addition to the fact that many countries with regular elections also regularly abuse minority rights and lock up people without trial — illustrates that democratic rights mean different things to different people, and different political leaders. And while I accept the caution that exposure to Western television does not necessarily lead to instant adoption of Western values, some of the biggest recorded impacts of television on behaviors like sending girls to school appear to be through watching local shows rather than Hollywood reruns. Again, I emphasize in the article that convergence in values doesn’t necessarily mean convergence on American values.

But given that more than 90 percent of surveyed countries saw declines in religious intolerance and homophobia between the 1993 and 2006 survey waves, that around three-quarters saw a decline in racist values, and that almost every country worldwide is seeing declining fertility and rising school enrollment of girls — it all adds up to a world where attitudes are moving in the same direction. This isn’t the end of history; as Norris and Inglehart point out, plenty of gaping gaps between values remain. And while I completely accept that Niger is not about to become Norway, in all likelihood they’re more similar in attitudes today than they were 20 years ago.