America's relative decline means that defense and social spending will have to compete head to head, but that isn't necessarily a bad thing. 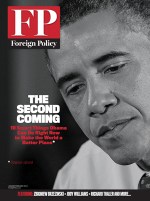 Sooner or later every country gets the foreign policy it can afford. In 1945, the industrial output of the United States roughly equaled that of the rest of the world. Under the circumstances, the American ambitions that inspired the Bretton Woods financial system, the Marshall Plan, and the Cold War policy of global containment of communism were not unreasonable. But in the last seven decades America’s comparative economic strength has declined dramatically, and the country can no longer support such a sweeping interpretation of the national interest.

Visionary leadership often consists of seeing sooner than others where the world is headed and finding the most productive path to that destination. President Barack Obama can demonstrate his vision and leadership by helping Americans adjust to the new reality imposed by their changing economic circumstances (“10 Problems Obama Actually Could Solve,” January/February 2013). He has ended the war in Iraq and is winding down the war in Afghanistan. His choice of Chuck Hagel to be defense secretary suggests that he realizes America’s military spending must decline, perhaps dramatically, in the coming decade.

From 1945 until 2008 America operated on a guns-and-butter philosophy: Almost never did spending for defense crowd out spending on the social programs Americans came to cherish. But in the recessionary world since 2008, and as the ranks of the retired swell, competition between defense on the one hand and Social Security and Medicare on the other is bound to become critical. And when American voters are compelled to choose between their pensions and preparations for another war like those in Iraq and Afghanistan, they will almost certainly choose the former.

Obama can help make the inevitable appealing — a variety of visionary leadership that is no less visionary because it breaks with what Americans have come to expect from such a president. Already he has resisted committing the United States to civil wars in Libya and Syria. He has reiterated his intention of ending America’s war in Afghanistan. In looking ahead he can look back and explain that America’s greatest gift to the world has more often been the domestic example of a thriving democracy than U.S. troops on foreign soil. Immigrants have come to America for centuries not because of America’s prowess at arms but because of the country’s promise of economic opportunity and personal liberty.

Defenders of the status quo and beneficiaries of what President Dwight Eisenhower called the military-industrial complex will try to brand Obama an isolationist, but he can respond that engagement with the world needn’t start with the military. In fact, ordinary Americans engage every day with the world — via global commerce and telecommunications, overseas travel, family connections of immigrants — to a degree that makes any charge of isolationism ludicrous.

Moreover, Obama can point out that a cost-benefit analysis of foreign policy, and in particular of prospective foreign wars, will not be a bad idea. Not one of America’s wars until now was subjected to a serious public assessment of its likely cost ahead of time. Had such an assessment been applied to the wars in Vietnam, Afghanistan, and Iraq, better policy decisions might have been made. Other wars, most notably World War II, would have survived the scrutiny and gone forward.

Less isn’t always more, but sometimes it can be.