One Step Forward, Two Steps Back

Democracy is in retreat. And there's a surprising culprit.

Over the past two years, the world’s attention has been captured by previously unimaginable — even rapturous — changes throughout parts of the Arab world, Africa, and Asia, where political openings have been born in some of the most repressive and unlikely societies on Earth. In Burma, where only six years ago a thuggish junta ordered the shooting of red-robed monks in the streets, the past two years have seen a formal, and seemingly real, transition to a civilian democratic government. In Tunisia, Egypt, and Libya, longtime autocrats were toppled by popular revolutions, and citizens in these states seemed at last to be enjoying the trappings of freedom.

“The Arab Spring is the triumph of democracy,” Tunisian President Moncef Marzouki, a former human rights activist, told the Guardian in 2012. The Arab peoples “have come up with their own answer to violent extremism and the abusive regimes we’ve been propping up. It’s called democracy,” wrote New York Times columnist Thomas Friedman.

Don’t believe the hype. In reality, democracy is going into reverse. While some countries in Africa, the Arab world, and Asia have opened slightly in the past two years, in other countries once held up as examples of political change democratic meltdowns have become depressingly common. In fact, Freedom House found that global freedom dropped in 2012 for the seventh year in a row, a record number of years of consistent decline.

The Arab Spring has not only led to dictators like Syria’s Bashar al-Assad and Bahrain’s ruling Al Khalifa family digging in across the region, but it has also pushed autocrats around the world to take a harder line with their populations — whether it’s China censoring even vague code words for protest or Russia passing broad new treason laws and harassing human rights NGOs. As Arch Puddington, Freedom House’s vice president for research, put it, “Our findings point to the growing sophistication of modern authoritarians.… Especially since the Arab Spring, they are nervous, which accounts for their intensified persecution of popular movements for change.”

But it’s not the Arab Spring alone that’s to blame. According to Freedom House, democracy’s “forward march” actually peaked around the beginning of the 2000s. A mountain of evidence supports that gloomy conclusion. One of the most comprehensive studies of global democracy, the Bertelsmann Foundation’s Transformation Index, has declared that “the overall quality of democracy has deteriorated” throughout the developing world. The index found that the number of “defective” and “highly defective democracies” — those with institutions, elections, and political culture so flawed that they hardly resemble real democracies — was up to 52 in 2012.

In another major survey, by the Economist Intelligence Unit, democracy deteriorated in 48 of 167 countries surveyed in 2011. “The dominant pattern globally over the past five years has been backsliding,” the report says. We’re not just talking about the likes of Pakistan and Zimbabwe here. Thirteen countries on the Transformation Index qualified as “highly defective democracies,” countries with such a lack of opportunity for opposition voices, such problems with the rule of law, and such unrepresentative political structures that they are now little better than autocracies.

Even countries often held up as new democratic models have regressed over the past decade. When they entered the European Union in 2004, the Czech Republic, Hungary, Poland, and Slovakia were considered success stories. After nearly a decade as EU members, however, all of these bright lights have dimmed. Populist and far-right parties with little commitment to democratic norms gained steady popularity; public distaste for democracy increased; and governments showed more willingness to crack down on activists. Hungary has deteriorated so badly that its press freedoms rate barely better than they were under the communists.

Meanwhile, as European democracy falters, old-fashioned coups are returning elsewhere. In Africa, Asia, and Latin America, coups had become rare by the late 1990s. But between 2006 and 2012, militaries grabbed power in Bangladesh, Fiji, Guinea, Guinea-Bissau, Honduras, Madagascar, Mauritania, Mali, Niger, and Thailand, among others. In places like Ecuador, Mexico, Pakistan, and the Philippines, where the military did not launch an outright coup, it still managed to restore its power as a central actor in political life.

This is also true across the Middle East, where the Arab uprisings appear to be entrenching the power of militaries, sparking massive unrest, scaring middle-class liberals into exodus, and empowering Islamist majorities. Protesters may have bravely challenged leaders from Yemen to Egypt, but it’s the loyalty of the military that has determined whether these rulers stay in power.

SO WHAT WENT wrong? Let’s start by blaming an unlikely culprit: the middle class. Contrary to the modernization theories of Samuel Huntington, Seymour Martin Lipset, and most Western world leaders, who have long argued that the growth of the middle class in developing countries is a boon to democratization, it hasn’t worked out that way.

In theory, as the middle class expands, men and women should become more educated and more demanding of greater economic, social, and ultimately political freedoms. And once a country reaches the per capita GDP of a middle-income country, it should rarely if ever return to authoritarian rule. “In virtually every country [that has democratized] the most active supporters of democratization came from the urban middle class,” Huntington wrote. Or consider the words of Russian economist Sergei Guriev, who declared just this past January that his country’s booming middle class has become “too well-educated and too determined to enjoy increases in their quality of life” not to force an end to President Vladimir Putin’s creeping authoritarianism. “They will demand that the Russian government is less corrupt and more accessible,” Guriev said. 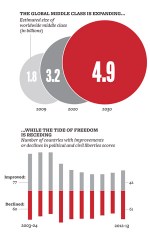 But they’re not succeeding. Sure, it’s true that the middle class globally is exploding; the World Bank estimates that between 1990 and 2005, the middle class tripled in size in developing countries in Asia, and in Africa it grew by a third over the past decade, according to the African Development Bank Group. Today, roughly 70 million people worldwide each year begin to earn enough to join the middle class.

It seems, however, that this new global middle is choosing stability over all else. From Algeria to Zimbabwe, the rising middle class has often supported the military as a bulwark against popular democracy, fearing that it might empower the poor, the religious, and the less-educated. In research for my book, I studied every coup attempt in the past 10 years in the developing world and then analyzed a comprehensive range of local polls and media. I found that in 50 percent of cases, middle-class men and women either agitated in advance for coups or subsequently expressed their wholehearted support for the army takeover. This is a shockingly high percentage, given that in many of these countries, such as Pakistan and Thailand, the middle class had originally been at the forefront of trying to get the army out of politics.

And in many countries, middle classes have increasingly come to disdain norms of democratic culture such as using elections, not violent demonstrations, to change leaders. From Bolivia to Venezuela to the Philippines, middle classes have turned to street protests or appeals to the judiciary to try to remove elected leaders.

And the trend is only growing stronger. Opinion polling from many developing countries shows that not only is the quality of democracy declining, but public views of democracy are deteriorating. The respected Globalbarometer series uses extensive questionnaires to ask people about their views on democracy. It has found declining levels of support for democracy throughout much of sub-Saharan Africa. In Central Asia and the former Soviet Union, the story is the same. In Kyrgyzstan, which despite its flaws remains the most democratic state in Central Asia, a majority of the population did not think that a political opposition is very or somewhat important. And recent polls show that only 16 percent of Russians surveyed said that it was “very important” that their country be governed democratically. Likewise, in Colombia, Ecuador, Honduras, Guatemala, Nicaragua, Paraguay, and Peru, either a minority or only a tiny majority of people thinks democracy is preferable to any other type of government.

Global economic stagnation since the 2008 crash has only weakened public support for democracy. New middle classes have been hit hard by the malaise, particularly in Eastern Europe. A comprehensive study of Central and Eastern Europe by the European Bank for Reconstruction and Development released in 2011 found that the crisis severely lowered support for democracy in all 10 of the new EU countries. “Those who enjoyed more freedoms wanted less democracy and markets when they were hurt by the crisis,” the report noted.

Even in Asia, one of the world’s most economically vibrant and globalized regions, polls show rising dissatisfaction with democracy — what some researchers have termed “authoritarian nostalgia.” Indonesia, for example, is considered by many to be the democratic success story of the 2000s. Yet vote-buying and corruption among elected politicians have begun to wear. In a 2011 study, only 13 percent of respondents thought that the current group of democratic politicians was doing a better job than leaders during the era of Suharto’s authoritarianism.

Even where democracy has deeper roots, disillusionment with the political process has exploded in recent years. From hundreds of thousands of Indians demonstrating against corruption to Israelis camping in the streets of Tel Aviv to protest their leaders’ lack of interest in basic economic issues to the French pushing back against government austerity measures, middle classes are increasingly turning to street protests to make their points. “Our parents are grateful because they’re voting,” one young woman told a reporter in Spain, where unemployment now tops 50 percent for young people. “We’re the first generation to say that voting is worthless.”

In his second inaugural address, U.S. President Barack Obama, like every U.S. president for decades, spoke of America’s role in helping promote democracy around the globe. “We will support democracy from Asia to Africa, from the Americas to the Middle East, because our interests and our conscience compel us to act on behalf of those who long for freedom,” he declared. Obama may have the best of intentions, but in reality there is little he can do. The sad, troubling regression of democracy in developing countries isn’t something that America can fix — because it has to be fixed at home too.