How an ex-British prime minister’s sister-in-law, a headhunter’s grandson, dodgy PR firms, and a Malaysian kingpin are colliding in a fight over the future of democracy.

Clare Rewcastle-Brown could be doing a lot of other things with her retirement. She could be spending her days watching TV, tending her investments, or socializing. But instead she’s operating a private shortwave radio service from a cramped office in downtown London. Her listeners are on the other side of the world, 6,500 miles away, in a place called Sarawak, a Malaysian state on the island of Borneo.

Sarawak (pop. 2.5 million) is home to what were once some of the world’s richest rain forests — forests that are under threat, Rewcastle-Brown says, from the political and business interests that dominate the state. The head of the Sarawak state government, 76-year-old Chief Minister Abdul Taib Mahmud, has been in office since 1981. According to Bloomberg, at least four of the major companies that have received contracts or concessions from the government (thus allowing them to reap profits from the area’s vast natural resources) are linked to his family. The Bruno Manser Fund, a Swiss-based charity devoted to the memory of an environmental activist who disappeared in Sarawak in 2000 while investigating illegal logging, asserts that Taib presides over a fortune of some $21 billion, which would make him the richest man in Asia. (He is, however, notably absent from the Forbes list of global billionaires.) A 2006 U.S. State Department cable published by WikiLeaks contains this sentence about Taib: “Embassy sources outside the government uniformly characterize him as highly corrupt.”

Taib disputes such claims, of course. He says that the rain forest is doing fine, and denies exploiting his office for purposes of personal enrichment. Pictures from Google Earth tell a different story, suggesting that as little as 10 percent of the forest remains intact. Most of the damage is done by companies harvesting hardwood timber or clearing jungle to make way for lucrative palm oil plantations.

This is not a story that you will hear much about from the media in Sarawak itself — or anywhere else in Malaysia, for that matter. That’s because Taib is closely allied with the Barisan Nasional (BN) coalition that has ruled Malaysia since it achieved independence 55 years ago. Critics of the chief minister say that, three decades ago, he made a deal with the country’s leaders to guarantee him a relatively free hand in Sarawak as long as he ensured them a generous share of the state’s lucrative oil reserves and reliable political support.

That bargain has a direct bearing on the general election that Malaysia is preparing to conduct at some point within the next few weeks. During that time, Barisan Nasional (and its predecessor) presided over a remarkable economic success story — but also a dark history of rigged votes and dirty tricks aimed at anyone that dared to oppose them. Perhaps most infamously, the government sent opposition leader Anwar Ibrahim to jail from 1999 to 2004 on dubious charges of corruption and sodomy, then tried to prosecute him for sodomy again in 2008 (an effort that ended in an acquittal two years later). Now, after making steady inroads in the last few election cycles, Anwar’s movement is making its strongest bid yet to break the government’s hold on power.

One of the pillars of BN’s hold over Malaysia’s institutions has been Taib’s political machine in Sarawak, which has reliably delivered a solid bloc of pro-government votes in parliamentary elections. Over the past few years the gradually emboldened opposition has chipped away at the government’s majority elsewhere in Malaysia. But Anwar’s forces have made little headway in Sarawak, where Taib’s grip over the local media has proved nearly impossible to crack.

That’s where Rewcastle-Brown (the second part of her last name derives from her marriage to ex-British Prime Minister Gordon Brown’s younger brother) comes in. She was actually born in Sarawak at the beginning of the 1960s, when it was still part of the British Empire. There’s a long history of Brits in this slice of Southeast Asia. (Before it became a British possession in 1946, Sarawak was famous as the kingdom of the “White Rajahs,” founded by Victorian adventurer James Brooke, who was given control over the place by the Sultan of Brunei in the mid-nineteenth century in return for his efforts to pacify its notorious pirates.) She left Sarawak at age eight, when her parents returned to England. After finishing university in London, she went into journalism, spending most of her career at the BBC World Service. But she seized every opportunity to return to Sarawak, a place that never quite let her go. 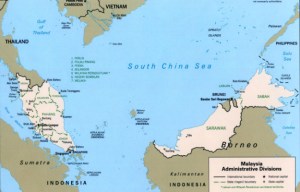 Map courtesy of University of Texas

In 2010, partly at the urging of friends from Sarawak, Rewcastle-Brown started a blog, dubbed “Sarawak Report,” that aimed to publicize Taib-sponsored destruction of the environment and the alleged culture of cronyism that supports it. She then upped the ante by creating her own radio station, which broadcasts under the name “Radio Free Sarawak” in the local languages of Malay and Iban. She doesn’t know either language, but that’s where her heavily tattooed colleague, known by his pseudonym as “Papa Orang Utan,” comes in. (He’s described by one British journalist as the “proud grandson of a Dayak headhunter.”)

The Malaysian government didn’t take long to retaliate. It quickly moved to finance a series of dubious PR efforts to discredit her, as part of its larger campaign aimed at the opposition movement led by Anwar’s opposition Pakatan Rakyat coalition. One company hired Texas-based conservative blogger Josh Trevino and a group of other American writers to come up with content designed to blacken the opposition. (Trevino heatedly denied working for the Malaysians when challenged on the same point back in 2011; a few weeks ago, he was compelled to retract his denial when paperwork emerged showing that he had indeed taken money from the Malaysian government.)

One product of the government PR effort was a sock-puppet website called “Sarawak Reports” (only that terminal “s” distinguishing it from Rewcastle-Brown’s website), that featured content supporting Taib and attacked Rewcastle-Brown. (For his part Trevino denies any connection with the site. “The reality is that I didn’t run Sarawak Reports,” he says, noting that it wasn’t among the sites for which he claimed responsibility in the papers he recently filed with the U.S. government for his other PR work for the Malaysian government.)

Taking on the powers-that-be in Sarawak requires a certain degree of grit. Rewcastle-Brown’s website has had to cope with frequent denial-of-service attacks, while her radio broadcasts, if past practice is any indication, can expect to be heavily jammed come election time. Radio Free Sarawak’s listeners, who call in from their mobile phones (sometimes climbing hills in the jungle to get proper reception), complain frequently of intimidation when they dare to protest government policies or resist illegal logging operations by well-connected local companies. One of Rewcastle-Brown’s best sources, a former financial adviser to Taib named Ross Boyert, turned up dead under mysterious circumstances after spilling the beans on some of Taib’s North American assets. (Officially the death was deemed a suicide.)

Rewcastle-Brown, who strews her stories with exclamation marks, admits that she’s biased against a government she describes as a “soft dictatorship.” “I believe in balance and objectivity,” she says. “But if you can’t have that, I believe you have to be honest about it. Yes, we are associated with the opposition. We’d love to be able to interview the government, but they won’t come on. We’ve got lots of questions we could ask them.” Though she expresses sympathy for Anwar’s movement, she disavows any organizational links with it. The funding for her radio, she says, comes primarily from a single “European philanthropist” who wishes to remain anonymous; listeners also send donations through the website.

She believes that her radio station played a part in the losses suffered by Taib’s party in the last Sarawak state election two years ago, when the opposition managed to win over a significant number of urban voters. The opposition certainly seems to think so: As the country gears up for the potentially epochal election, activists are busily handing out radios to people in the hard-to-reach Sarawak countryside. The people in villages already equipped with radios have taken to organizing their evenings around the broadcasts from London. (The photo above shows Iban tribesmen in the Sarawak village of Menyang, who count themselves among Radio Free Sarawak’s biggest fans.)

The fight over an obscure patch of jungle might seem bemusing to many far-away readers. But it shouldn’t be. As we are now painfully aware, the ecological impact of events in places in Sarawak can affect us all. At the same time, the story of Malaysia’s approaching election (and Sarawak’s role in it) is also worth watching. If the government loses, it will be a milestone for democracy in Southeast Asia and beyond. This is the country, after all, whose long-time prime minister, Mahathir Mohamad, spent years assuring anyone who would listen that “Asian values” were incompatible with pluralism and democracy, which he dismissed as culturally specific Western exports. A defeat for the brand of Malaysian authoritarianism that Mahathir so long championed promises a refreshing renewal. And a new lease on life for the Sarawak rain forest wouldn’t be a bad thing either.

This aricle has been updated to reflect Joshua Trevino’s denial of involvement with the Sarawak Reports website.