The Disease Next Door

How the world’s nastiest and least-known outbreaks are afflicting some of the world’s wealthiest countries.

They’re probably the most important diseases you’ve never heard of — causing everything from greusome limb disfigurement and skin sores to bladder and liver cancers to  neurological damage — and they’re practically ubiquitous among world’s poorest people. Typically, such infections last for years or even decades, causing chronic and permanent disabilities such as stunted growth and intellectual developments in children; blindness, heart disease, and disfigurement of adults; and pregnancy complications that can result in severe disease in both newborns and their mothers. In so doing, neglected tropical diseases (NTDs) have been shown to acutally cause poverty and even destabilize communities, leading to conflict.

Because they strike mostly forgotten people living on less than $2 per day, NTDs have traditionally been thought of as a problem exclusive to low-income countries, especially in sub-Saharan Africa (where indeed they are important public health threats). But our latest research shows that most cases of the worst NTDs (defined by disability-adjusted life years lost) actually occur among the extreme poor who live in the large emerging market economies that comprise the G-20, together with Nigeria, which has a GDP equivalent to several Western European countries (See Table).

For example, more than two-thirds of the reported cases of visceral leishmaniasis, which causes a leukemia-like chronic illness, are found in G-20 countries, led by India, Brazil, China, and Italy. Similarly, 60 percent of those who require treatment for lymphatic filariasis, responsible for elephantiasis, live in India, Indonesia, Nigeria, and Brazil; while more than 70 percent of food-borne trematode infections, which cause liver cancer and severe lung disease, are found in China, South Korea, and Russia. Almost two-thirds of the global cases of Chagas disease — which causes cardiomyopathy and other life-threatening heart diseases — are in Brazil, Argentina, Mexico, and the United States, and 77 pecent of the world’s leprosy cases occur in G-20 countries, led by India, Indonesia, Brazil, and China. Together, the G-20 countries and Nigeria also account for almost half of the world’s cases of hookworm infection, while a large number of schistosomiasis cases — responsible for chronic renal disease, female genital ulcers, and liver disease — are in Nigeria, South Africa, Brazil, China, and Saudi Arabia.

Much of the disease burden within G-20 countries falls on the poor in Indonesia and the BRICS (Brazil, Russia, India, China, and South Africa), but there are also several serious NTDs found in Eastern and Southern Europe, and in the southern United States, including Chagas disease (heart disease), cysticercosis (seizures and other neuologic illness), and dengue (breakbone fever). New U.S. poverty statistics indicate that today almost 1.5 million American families surive on $2 or less in income per person per day in any given month. Many of the poorest — and most disease-prone Americans — reside in Texas and other parts of the Gulf Coast region.

Other locations within the G-20 that are particularly hard hit include areas of extreme poverty in southern Mexico, Saudi Arabia, and the northern territories of Australia (which is heavily populated by aboriginal populations) (See Figure). Instead of thinking of global health in terms of “developing” and “developed,” therefore, it makes more sense to conceptualize NTDs as pockets of disease endemicity in areas of intense poverty throughout the world. These pockets occur, of course, in sub-Saharan African and other low-income regions, but they also afflict the world’s wealthiest and largest-GDP countries — countries with enormous financial and scientific capacity to combat and eliminate NTDs.

I refer to this new mapping of global disease burden as “blue-marble health,” invoking the iconic 1972 image of Earth taken by the crew of spacecraft Apollo 17. As a potent symbol of the need for global health cooperation, blue-marble health has important policy implications for disease control and science diplomacy. In particular, it has the potential to promote awareness among G-20 countries that NTDs represent a significant impediment to economic development. It also has the potential to encourage international cooperation between G-20 countries to jointly solve thorny NTD problems, while simultaneously galvanizing G-20 support for lower income countries in Africa, Asia, and the Americas. 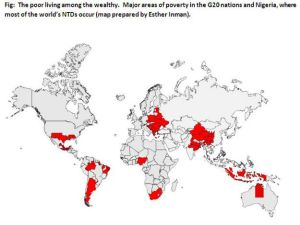 Since 2007, support from USAID has enabled more than 250 million people in low- and middle- income countries to receive low-cost packages of essential medicines for NTDs — a practice the World Health Organization (WHO) refers to as “preventive chemotherapy.” In 2012, Britain expanded its support of preventive chemotherapy, with shared targets to eliminate NTDs such as lymphatic filariasis, onchocerciasis, trachoma, and leprosy. Beyond Britain and the United States, however, very little is being done to leverage preventive chemotherapy against NTDs. There is an urgent need to encourage all of the G-20 countries (and the Nigerian government) to make similar commitments.

Preventive chemotherapy is considered one of the world’s most cost-efficient public health schemes, typically costing less than $0.50 per person annually. Ensuring full G-20 participation in financing preventive chemotherapy for NTDs — whether it is for their own countries or for less fortunate disease-endemic countries — should become a high priority for future G-20 summits and discussions. According to the WHO, approximately 1.9 billion people require preventive chemotherapy for NTDs worldwide, yet only about 700 million people (36 percent) currently receive access to essential NTD medicines. Global cooperation among the G-20 and Nigeria is essential for full NTD coverage.

At the same time, the G-20 should take the lead in developing new vaccines and treatments for NTDs. Almost all biotechnology and life-science products are currently developed, manufactured, and tested in G-20 countries, including Brazil, China, India, and Indonesia — meaning that these countries could take leadership in developing new vaccines specifically for NTDs. Such antipoverty vaccines could target NTDs that can’t be treated with preventive chemotherapy alone – such as leishmaniasis and Chagas disease, which cause more than 60,000 deaths per year, and economic losses that exceed $7 billion for Chagas disease alone.

Today, the United States and some European countries account for almost all of the world’s public support for neglected disease research and development, with minimal contribution from the emerging market economies of the G-20. As such, there is an urgent need for these other G-20 nations to contribute, especially Russia, India, and China — countries wich currently spend heavily on nuclear weapons technologies. Their nuclear activities could be redirected for peacetime purposes to develop new NTD technologies.

The recently established U.S. State Department Office of Global Health Diplomacy should l
ead diplomatic efforts to pressure all of the G-20 countries to expand preventive chemotherapy efforts in order to ensure 100 percent global NTD drug coverage, while simultaneously promoting international scientific cooperation to produce NTD technologies. In some cases, these new scientific activities could be implemented in lieu of nuclear proliferation, similar to joint U.S.-Soviet efforts to collaborate on the development of an oral polio vaccine at the height of the Cold War. Ultimately, blue-marble health could become an important new theme for future G-20 summits as a highly cost-effective means to lift the world’s poorest people out of a downward spiral of poverty and conflict.

<p> Peter Hotez is dean of the National School of Tropical Medicine at Baylor College of Medicine, president and director of the Sabin Vaccine Institute and Texas Children's Hospital Center for Vaccine Development, and fellow in disease and poverty at the James A. Baker III Institute for Public Policy of Rice University. </p>
Tags: China, Economics, Environment, Health, India, Science and Technology
Latest