Think you have the commute from hell? Here are six epic bottlenecks that might make you feel a bit better. 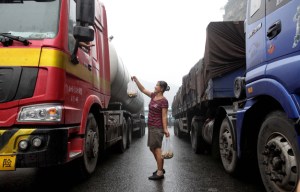 We’ve all been frustrated by traffic, but rarely do we attempt to fix a city’s traffic problems ourselves. Writing for Foreign Policy, Mike Rose documents how he did just that — by using the newest version of SimCity to investigate the causes of Sao Paulo’s congestion. Employing the computer game’s fairly realistic modeling capabilities, Rose was able to simulate solutions to the gridlock along one of the city’s most notorious roads. Which makes us wonder: What other places could use a logistical makeover?

To answer the question, we put together a list of some of the worst traffic jams the world has ever seen. Maybe SimCity could’ve fixed these too.

In August 2010, road construction designed to improve circulation on the outskirts of Beijing ended up causing a 62 mile-long crush of cars, trucks, and lorries on the Beijing-Tibet Expressway. The jam lasted for more than 11 days, keeping some motorists in their cars for five days.

According to Xinhua, the traffic jam didn’t have to be as bad as it was; even after days of vegetating in their cars, stubborn motorists refused to take detours because they didn’t want to pay more for gas and tolls.

But one man’s nightmare commute is another man’s business opportunity. During the week-and-a-half-long jam, vendors walked from car to car, selling instant noodles at four times and water at ten times the normal price. “If you said ‘no’ or complained about the price they threaten to break your [wind]shields,” one driver told the Inner Mongolia Morning Post. And who says China lacks entrepreneurs?

In some cases, events took quite a nasty turn. The Inner Mongolia Morning Post also reported incidents of modern-day highway robbers siphoning gas from lorries while their drivers slept, stealing cash from motorists, and, in one case, stabbing an older driver in the arm. 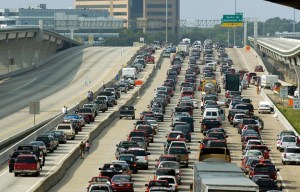 Responding to warnings about Hurricane Rita’s approach — and no doubt haunted by the devastation wrought by Hurricane Katrina just one month before — an estimated 2.5 million Texans hit Interstate 45 in an attempt to evacuate Houston. The resulting traffic jam was so bad that many chose to return home rather than take their chances with 140-mile-per-hour winds on the open road.

The jam was largely fueled by widespread fear: Texas officials never asked all Houston residents to evacuate their homes. And in the end, after the storm lost some momentum and shifted course, Houston ended up avoiding major damage. Nevertheless, the bottleneck on the interstate did cause some residents to question how Texans would fare in the event of an actual mandatory evacuation. And, as the New York Times reported, one Harris County official did admit that the massive congestion was “not in the plan.”

Indeed, when some motorists manage to travel only 10 miles in nine hours on a designated evacuation route, it might be time to rethink your emergency planning. 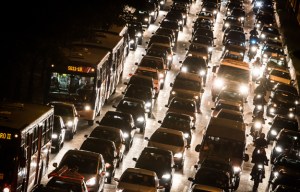 Sao Paulo is widely considered the worst traffic city in the world, with jams in and around the urban center stretching, on average, 112 miles during rush hour each day. In June 2009, the city set a world record for combined traffic jams when the total bumper-to-bumper volume reached 181 miles, covering over a third of all roads in the city.

It’s no surprise that residents have learned to make the most of their time stuck in traffic: they shave, read, and sometimes pick up dates. One Sao Paulo resident, whose 11-mile commute to work can take up to two hours each way, met her husband in a traffic jam. “I was with a friend in my car and he was in his car also with a friend,” she told the BBC. “In the stop and go of the traffic jam we started driving side by side and then he started looking at me.” Apparently, after some window-flirting, a phone number was exchanged, and before long it was happily ever after.

With the Brazilian middle class booming, roughly 1,000 new cars take to the Sao Paulo streets each day. “It’s like a war,” one resident told the BBC, “Because everybody seems to become very selfish once they are behind the wheel of a car.”

Sao Paulo’s “sea of cars,” as one resident described the traffic situation to the BBC, has had a negative impact on the economy (delivery prices are especially high) — but the helicopter business is another story. With business executives increasingly choosing to spend a few minutes in the air rather than a few hours on the road, Sao Paulo’s helicopter fleet has become one of the largest in the world.

When a snowstorm hit Russia in late November 2012, the line of cars on Highway M-10, which stretches between Moscow and St. Petersburg, came to a standstill that lasted for three days.

According to CNN, stalled drivers reported that cafes along the route were ratcheting up prices. The government’s Emergencies Ministry set up tents along the highway that offered tables of warm food and drink and psychological support for those who were having trouble muddling through days of gridlock. 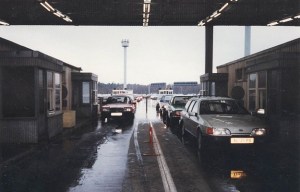 The gradual opening of the East/West Germany border in late 1989 and early 1990 made the crossing a hugely popular destination for Germans eager to see the family members they had been separated from for decades. At the start of the first Easter holiday during which Germans could cross the border (and also the first time in 23 years that East Germans were given a four-day Easter weekend), more than 18 million cars jammed up along the border. The bumper-to-bumper congestion still holds the Guinness World Record for the most cars in a single traffic jam.

What happens when hundreds of thousands of Parisians and their families all decide to return from their Alpine ski chalets on the same day? Add a little bad weather and you get the longest reported bottleneck — or, as the French would say, embouteillage — in history, according to the Guinness World Records.