The former British prime minister was a transformative politician. But her public image as an unblinking Iron Lady fails to do justice to her complexity. 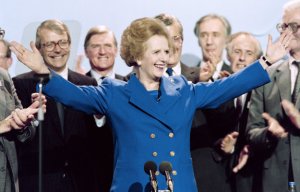 As a trip to any London newsstand this week will tell you, Margaret Thatcher’s political mission was an inherently polarizing one. To her fans she remains the very embodiment of self-assured conservatism, the woman who unapologetically celebrated the values of patriotism and free enterprise. To her foes she remains Thatcher the Milk Snatcher, the sneering prima donna who slashed away at the British welfare state, spared little time for the poor, and opened the way to an era of excess and greed.

Both of these images are caricatures. Yes, the late Thatcher was a leader of extraordinary single-mindedness — she had to be, given her status as a woman who aimed to have her way in the overwhelmingly male world of British postwar politics. She won election as British prime minister in 1979 and held onto the office for 11 years — longer than any of her democratic counterparts during the twentieth century. Her calculated flintiness cemented her popular image as the “Iron Lady” (a nickname originally bestowed her by a Soviet newspaper that was attempting to mock her, but which she characteristically embraced instead). In reality, however, she was also a practical political operator with a sharp sense of the limits imposed by public opinion. Indeed, not all of her policies were as radical as her myth suggests. Here are a few misconceptions:

Up to a point. One of Thatcher’s signature achievements was her privatization program, which took some of the key industries that had been nationalized by the Labour Party in 1945 and restored them to private ownership. British Gas, the telephone company, and industrial firms were removed from state control, their shares sold off to investors. The idea was to get government out of the direct day-to-day management of companies that were better off exposed to the bracing discipline of the markets. A similar logic motivated her policy of selling off hundreds of thousands of public housing units to the people who lived in them — transforming them from tenants to homeowners. Bureaucratic regulation of any kind of economic activity was a red flag to her, and she slashed away at red tape wherever she found it. One of her most important moves after becaming prime minister in 1979 was the abolition of exchange controls, an important precondition for the later “Big Bang” (her late 1980s deregulation push that almost instantly transformed London into a major European financial center.)

All of this was dramatic enough, and certainly reduced the extent to which the government intervened in the lives of ordinary people. And yet she pointedly shied away from any radical restructuring of the core institutions of the “cradle-to-grave” welfare state that the Labourites had established three decades before her. She was especially reluctant to take on the National Health Service, the all-encompassing health-care system that remains a mainstay of British society today. Though she attempted a few piecemeal reforms of the NHS, she notably refused to expose it fully to market discipline, all too aware that the British public would never stand for that. Nor did she attempt any substantial changes in the system of old-age pensions or unemployment insurance.

Free-market economist Milton Friedman once described Thatcher’s economic philosophy as that of a “19th-century liberal,” but he couldn’t have been more wrong. She was a thoroughly 20th-century reformer who understood that some functions of big government defied political remedies. And there was another problem: Thatcher’s hatred of socialism sometimes clashed with her urge to reduce government involvement in the lives of citizens. Many city councils in Britain at the time were dominated by far-left Labour politicians, and Thatcher often found herself persuaded to use the powers of the national government to counter them — thus sometimes drawing London into realms where it had previously remained aloof. Critics such as journalist Simon Jenkins note that, in this respect, she often proved more closely wedded to the “nanny state” than she was often willing to admit. 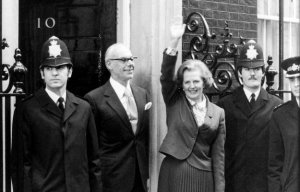 “Thatcherism Was All About Cutting Taxes.”

Sort of. Britain became notorious in the 1970s for its astonishingly high rates of tax on top earners, prompting many a rock star and CEO to seek more hospitable financial climes. One of the Thatcher’s first moves after her election as British prime minister in 1979 was to slash income taxes. (In 1979 the top rate was an astonishing 83 percent, which her government cut to 60 percent.) By reducing the tax burden on earnings, she aimed to unleash long-suppressed entrepreneurial impulses and to make it easier for Britons to get back into business for themselves. And she certainly succeeded. Post-Thatcher Britain has a far livelier and more diverse capitalist culture than it did before she came long.

In stark contrast to today’s Republicans in the United States, though, Thatcher acknowledged that it was impossible to balance the government’s books without raising revenues elsewhere — which she did, in her first term, by boosting taxes on consumption. Though government finances during her early years received a huge boost from the flow of North Sea oil (which had begun not long before she became prime minster), the share of revenue from taxes remained high throughout her prime ministership. As Jenkins notes, taxation as a share of non-oil domestic product actually rose, from 35 percent in 1979, to 37 percent by the time she left office in 1990. 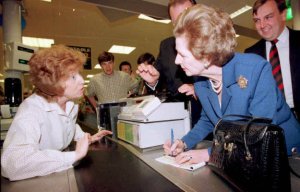 “Thatcher Was a Dyed-in-the-Wool Social Conservative.”

Not really. It was TV journalist Andrew Marr who came up with one of the best one-liners about Thatcher: “Margaret Thatcher was a child of the sixties — the 1860s.” Thatcher loved to invoke images of a halcyon Britain where people relied on their own individual initiative to get ahead, where the needy received care from private charity, and where values of thrift and hard work reigned supreme.

In many ways, however, she was entirely a creature of the second half of the 20th century. Though she was the product of a strict Methodist upbringing that emphasized individual responsibility and respect for traditional values, her record as a Conservative Party parliamentarian shows that she approved of legal abortion and also voted for a landmark law in the 1960s that decriminalized homosexuality. (To be sure, she later angered gay rights advocates with her support for a 1988 measure that prohibited schools from teaching “the acceptability of homosexuality as a pretended family relationship.”) She might have found some common ground with today’s U.S. Republicans over capital punishment, of which she strongly approved. Yet it’s hard to imagine that her other views on social issues would have proved amenable to the American conservatives who today hold her in such high
regard. 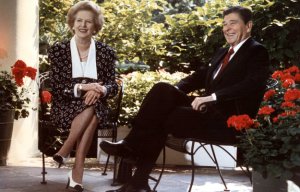 Not always. There’s no question that Reagan and Thatcher shared many of the same political instincts — including a conviction in the superiority of free markets and private initiative, a suspicion of big government, and respect for organized religion. Their awareness of this basic philosophical overlap served as the basis for a remarkable partnership that has yet to find its equal in the long history of the U.S.-UK “special relationship.” The common front that the two were able to build against the Soviet Union certainly helped them to navigate one of the most dangerous phases of the Cold War in the early 1980s.

And yet the public image of a serenely harmonious “power couple” obscures more than it reveals. Both were fervent defenders of their countries’ respective national interests, which sometimes clashed. As Thatcher biographer John Campbell notes, Thatcher was profoundly disappointed when the Reagan administration failed to take her side after Argentina invaded the Falkland Islands: The White House pushed her to seek mediation rather than a military solution to the conflict. She also harshly criticized Reagan for failing to get the U.S. deficit under control. In the late 1980s, Campbell observes, Thatcher was also strongly critical of Reagan’s “Star Wars” missile defense plan, though she succeeded in keeping her misgivings relatively quiet.

But perhaps the worst (and most visible) disagreement between the two came in 1983, when the United States invaded the Caribbean island of Grenada. The leader of the island was a Marxist named Maurice Bishop, and the Americans were worried that the Cubans were maneuvering to expand their influence there. But Grenada, a former British colony, was a member of the Commonwealth, and the British strongly objected to the American failure to warn them before the intervention. In the end, Thatcher and Reagan managed to weather the disagreement. 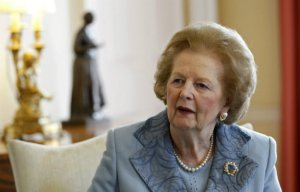 “She Didn’t Change All That Much.”

Dead wrong. Believe it or not, some revisionists have tried to argue over the years that Thatcher’s impact is vastly overrated. There are the Marxists who claim that we exaggerate her effect as an individual, since she was merely responding to the social and political conditions of her time. There are the conservative purists who insist that Thatcher didn’t really change Britain in the ways that mattered. But this is an especially hard argument to make.

Andrew Marr comes much closer to the truth in his excellent TV series History of Modern Britain. “Don’t think of her as a politician,” he says at one point. “Think of her as a one-woman revolution, a hurricane in human form.” Thatcher transformed her country beyond all recognition. During her time in office, she succeeded in dismantling the “postwar consensus” that had dominated British politics since the end of World War II. In 1945, the Labour Party won a landslide victory by promising voters a new vision of Britain based on a comprehensive welfare state (including single-payer health insurance), public ownership of key industries, all-encompassing regulation, and a prominent decision-making role for trade unions. Arriving in office at a moment when rampant inflation and industrial decline had made the limits of this model all too apparent, Thatcher proceeded to implement her own ideas of what Britain should be — to dramatic and lasting effect. “We still live in the Britain that Maggie built,” as Guardian columnist Jonathan Freedland notes. Love her or hate her, it’s impossible to imagine modern Britain without her.