What Extremists Are Saying About the Boston Massacre

A guide to the Internet blame game.

After the Oklahoma City bombing in 1995, a procession of extremists and lunatics jumped on the phone to claim responsibility for the blast. Before there was an Internet and before September 11, that was the general rule. If someone carried out an act of terrorism, other extremists would try to co-opt it to publicize their own cause until the real perpetrator could be identified.

That was then. Since 9/11, the government has adopted a full-throttle response to anyone who smells like a terrorist, so mounting such a claim has become a good way to attract law enforcement to one’s door. And, as the pulse of extremism has moved from underground bookstores and rural training camps to the more public highways of the Internet, most radicals have realized that online anonymity is an illusion. Domestic extremists have also been sobered by the costs of terrorism — a process that began after Oklahoma City, when even those who hated the government were repulsed by the death of so many children. Many people who follow extreme ideologies, such as white nationalism, simply have no taste for blood.

The change is palpable. Domestic extremists of every stripe have been eager to discuss who is responsible for the Boston Marathon bombing, and their conclusion has been almost unanimous: It’s the other guy.

A white nationalist blogger based in Massachusetts began blaming Muslims before the smoke cleared.

The 2 blast assault is a hallmark of islamic terrorists. We let that scum live side by side with us- and this is what we get #BostonMarathon

But it didn’t take long before other nagging worries began to enter his mind.

Good morning. I half expected to get black bagged in the middle of the night by Piggies looking for a white guy to blame the bombing on.

On Stormfront, the preeminent Web forum for white nationalists, the marathon bombing prompted a thread with more than 500 posts and an array of theories about which of the other guys were to blame. For instance, it could be Jews, or it could be Muslims, or it could be a little of both. Such speculation finally got to be a little too much even for the site’s fairly credulous crowd. It turns out that it’s surprisingly tough figuring out whether to blame Jews or Muslims.

Other posters, however, stuck with their core expertise, which was made easier by the unfortunate language in one law enforcement bulletin (known as a BOLO, which stands for “be on the lookout”), which said police wanted to speak with a “darker-skinned or black” male in a black sweatshirt with a black backpack. On Stormfront, that much black could not go unnoticed: 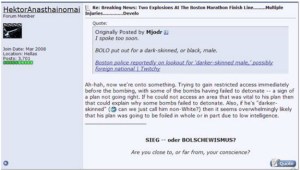 When they weren’t blaming someone else based on no evidence, many online extremists were complaining (not entirely without justification) about other people blaming people with no evidence.

“Boston Marathon Bombing: Who Do They Plan to Blame?” was the title of a posting that went viral on several sites, speculating about the Obama administration’s eagerness to find a scapegoat to prosecute. And of course, there were plenty of people who wanted to blame the government more directly.

Aficionados of the “False Flag Theory of Everything” — the increasingly popular notion that every act of public violence is actually committed by the government through mind control, manipulation, or simple frame-up in order to justify the draconian oppression of Americans — had a moment of unparalleled glory when a reporter from Alex Jones’s conspiracy website, Info Wars, somehow managed to get press credentials and used them to sandbag Massachusetts Governor Deval Patrick with the first question at the official press conference on the attack:

Why were the loudspeakers telling people in the audience to be calm moments before the bomb went off? Is this another false flag attack staged to take our civil liberties [and promote] homeland security while sticking your hands down our pants on the streets?

And so it went. Some in the antigovernment Patriot movement insinuated that what America needs is less homeland security and more armed citizens. Anarchists pointed the finger of blame at America’s targeted killings and military adventures abroad, while objecting to heavily armed police patrolling the streets after the blast.

The only people who wanted to own the attack were online jihadists. While some English-speaking jihadists played the blame game (“seems like some NRA gun nut,” said one on the radical but not quite terroristic Islamic Awakening forum), jihadists overseas obsessively posted to web forums and tweeted about the bombing, while wishing and hoping and thinking and praying that it had been carried out by one of their own.

But even they were hesitant, having been burned not that long ago with a premature declaration of responsibility for the actions of Anders Breivik, who embarrassingly turned out to be an anti-Muslim terrorist.

A jihadist posting at the Ansar Al Mujahideen forum gave advice that members of the media would also do well to heed:

“My brother, be patient. […] Let us see if this is a criminal action or a jihadist. Why hurry?”