Why isn't the rest of Asia afraid of China?

Are tensions high in Asia? It certainly appears so. Over the last few months, North Korea has tested missiles and threatened the United States with nuclear war. China spars regularly with Japan over ownership of a group of disputed islands, and with several Southeast Asian countries over other sparsely inhabited rocks in the South China Sea. Meanwhile, the United States is in the midst of a well-publicized “pivot” to East Asia, and continues to beef up its military deployments to the region.

Yet as of 2012, military expenditures in East and Southeast Asia are at the lowest they’ve been in 25 years — and very likely the lowest they’ve been in 50 years (although data before 1988 is questionable). While it’s too early to factor in recent tensions, as China’s rise has reshaped the region over the past two decades, East and Southeast Asian states don’t seem to have reacted by building up their own militaries. If there’s an arms race in the region, it’s a contest with just one participant: China.

Military expenditures reflect states’ threat perceptions, and reveal how they are planning for both immediate and long-term contingencies. In times of external threat, military priorities take precedence over domestic ones, like social and economic services; in times of relative peace, countries devote a greater share of their economy to domestic priorities. The best way to measure military expenditures is as a percentage of total GDP, because this reflects how much a country could potentially spend. In 1988, as the Cold War was winding down, the six major Southeast Asian states spent an average of almost 3.5 percent of GDP on military expenditures. (All data comes from the Stockholm International Peace Research Institute, the most dependable source for worldwide military data, which began publishing its global military figures in 1988.)

By 2012, that number had dropped to less than 2 percent of GDP. Vietnam, despite current tensions with China over maritime issues, has reduced its military expenditures most dramatically, to 2.4 percent in 2012, down from 7.1 percent of GDP in 1988. Back then, an impoverished China was actively involved with insurgencies in Burma and Thailand; and U.S.-Soviet competition threatened the stability of the entire region. Singapore, Indonesia, and Malaysia had only recently settled border disputes, while Vietnam was still recovering from wars it fought against the United States and China. Now, only North Korea and Taiwan fear for their survival — almost every other state is more stable and prosperous than it has ever been. (Taiwan’s military spending dropped from 5.3 of GDP in 1988 to 2.3 percent in 2012; there are no good statistics on North Korean military spending.)

Even in 1995, after the Soviet Union’s collapse and before the Asian Financial Crisis, average military spending was 2.5 percent of GDP. The drop is not a worldwide phenomenon: Military expenditures in Latin America, for example, hovered around 2 percent of GDP over the last two decades. (European spending dropped from 2.9 percent of GDP in 1988, to 1.7 percent in 2012.)

Are some states spending so little because they shelter under a U.S. military umbrella? Unlikely. In 2012, countries with a U.S. alliance spent 1.73 percent on defense, almost exactly the same as non-ally countries. And if renewed U.S. security commitments provided a relief to those East Asian countries, military expenditures should have increased in U.S. allies during the years leading up to the pivot, and then decreased afterwards; instead, expenditures fell below two percent in 2000, and stayed there.

All states in the region have ample evidence of China’s rising power and ambition, and could easily have begun counterbalancing. China’s wealth, military, and diplomatic influence have grown dramatically since the introduction of reforms in 1978. While the extent of China’s power may have been unclear in the 1980s or 1990s, today China is unquestionably the second most powerful country in the world. If states were going to balance, wouldn’t they have begun by now?

Maritime disputes are becoming increasingly acute, and China appears to be growing increasingly aggressive. If East Asian countries start spending more on defense, that will be evidence of their concern. If they don’t, it suggests they are not all that worried — and perhaps we shouldn’t be either. 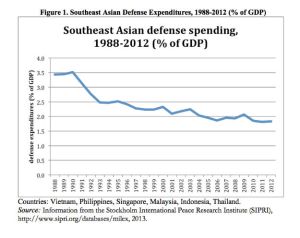 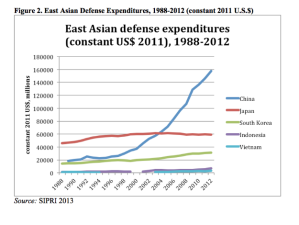 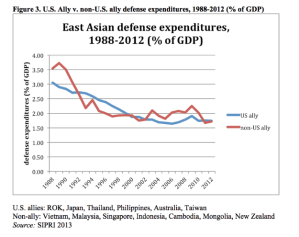 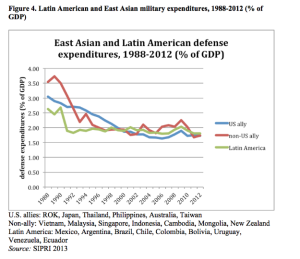