The entrepreneur and technology theorist weighs in on drones, surveillance, and what's coming next. 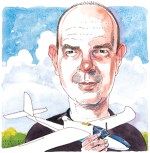 Chris Anderson has been called many things: a visionary, a pioneer of the Internet economy, a proselytizer of DIY 2.0. But it’s probably more apt to think of him as a weather vane: He might not control the winds of change, but he’s often the first to see which way they’re blowing. Trained as a physicist with a sideline in quantum mechanics, Anderson brought a scientist’s curiosity to the helm of Wired magazine. In his nearly 12 years as editor, he made science and technology cool again, while writing a trio of books about Silicon Valley’s big ideas, from the “long tail” theory of how to sell stuff online to why giving things away for free is good for business. His latest manifesto is Makers: The New Industrial Revolution, and he’s putting his money where his mouth is with 3D Robotics, a do-it-yourself company that envisions a world full of inexpensive, autonomous drones. No longer just a weather vane, now Anderson is taking to the sky.

New technologies, from the Internet to space travel, often start with the military and are very expensive. And then, as economies of scale kick in and Moore’s Law works its magic, suddenly they hit a consumer moment and words like “personal” enter into it. At that point, all bets are off. That’s the stage we’re hitting right now with drones. We’re starting to see the same effects kick in just as we saw with the personal computer or the Internet. Hopefully, someday people will forget that drones once started as military technology.

What if, every morning, a drone would take off at the crack of dawn, do a lawn-mower pattern over the crop, and by breakfast you’d have the daily report — which, depending on whatever crop you had, tomatoes or wheat or grapes or whatever, would be able to tell you if you have a pest outbreak, a fungal outbreak, or a disease outbreak. That kind of information turns out to be incredibly valuable to farmers because it can save a lot of money. And it really improves the environment because they’ll be using fewer chemicals and less water. Let’s remember, this is the biggest industry in the world, and to recognize that we have a massive information-scarcity problem in agriculture that could be solved with cameras in the sky has been the epiphany for me.

It’s hard to argue that we’re not in an exponential period of technological innovation. The personal drone is basically the peace dividend of the smartphone wars, which is to say that the components in a smartphone — the sensors, the GPS, the camera, the ARM core processors, the wireless, the memory, the battery — all that stuff, which is being driven by the incredible economies of scale and innovation machines at Apple, Google, and others, is available for a few dollars. They were essentially “unobtainium” 10 years ago. This is stuff that used to be military industrial technology; you can buy it at RadioShack now. I’ve never seen technology move faster than it’s moving right now, and that’s because of the supercomputer in your pocket.

I actually never, never make the mistake of trying to predict the future, ’cause I suck at it. And I fall back — and you’ll forgive my little semantic parlor trick here — but I fall back on William Gibson’s famous quote that “the future is already here — it’s just not evenly distributed.” To predict the future, you just have to keep your eyes open, and there it is.