Not since the countries of Africa tossed out their colonial masters several decades ago has there been this much optimism and excitement about the continent’s prospects. While China’s economic expansion has slowed, and while Europe and the United States try to dig themselves out of recession, Africa has not only weathered an up-and-down global economy — it’s been booming. Consider Nigeria’s stock market, which gained 35 percent last year, or Uganda’s, up 39 percent. But even more important is that real gains are finally being made on the ground in Africa today — ones that speak to the possibility of a breakout phase that would lift millions out of utter poverty and great misery.

Let’s start with the numbers. According to International Monetary Fund data, sub-Saharan Africa has grown at an annual rate of 4.8 percent over the last five years, a period that includes the trauma of the global financial crisis. That means it has outperformed other developing regions — like Latin America, for example, at 3.3 percent — and it blows out of the water the advanced economies, which expanded just 0.5 percent per year.

This is happening on a continent that has been saddled for decades with the worst levels of malnutrition, ravaged by preventable and treatable diseases, beset by corruption and rent-seeking, and scarred by a legacy of foregone opportunities. It is also occurring on a continent thought to be deeply vulnerable to negative external shocks, internal political upheavals, and now, sadly, terrorist movements.

No wonder there’s so much excitement. Even the most discriminating investors are paying greater attention to Africa, which is all the more remarkable given that for decades the place was deemed virtually uninvestable. Now, from bonds to private equity, new vehicles are emerging to channel foreign investments into more of the most promising African economies. How real is the boom? Foreign direct investment in sub-Saharan Africa has leapt from $6 billion in 2000 to $34 billion in 2012. In just the past couple of years, several African countries — among them Angola, Namibia, Senegal, and Zambia — have issued external debt for the first time, allowing them to invest for the future. 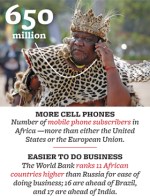 Cynics might say they’ve seen this all before — that 10 years ago, another great wave of anticipation about Africa’s development merely gave way to disappointment. And yes, some things fizzled out; in some instances, countries were even left worse off. Witness what happened to Ivory Coast, once regarded as the jewel of Africa’s development crown: It is only now emerging from a brutal, costly civil war that erased years of development.

We should be cautious, then, in saying that things are sure to be different this time around. Yet if one looks closely, cause for hope is on solid analytical soil. Africa’s traditional growth story was built on rising prices for international commodities. But this proved neither sustainable nor inclusive, encouraging corruption and an unproductive rentier mentality among the ruling elite. There’s a reason we think of Africa when we think of the resource curse.

This time, however, an expanding set of small- and medium-sized enterprises is bringing real economic diversification. According to World Bank statistics, these firms add some 20 percent to the continent’s GDP and contribute roughly 50 percent of the new jobs in sub-Saharan Africa. These successful businesses are giving rise to internationally competitive companies, thereby providing access to global markets, new business models and technologies, and higher wages and salaries.

This can have a multiplier effect on long-term productivity of both labor and capital. As we’ve seen in Brazil and Mexico — and now in Ghana and Kenya — it slows brain drain by providing greater opportunities at home; it encourages nationals to migrate back home; and it engages the diaspora in enhancing the flow of capital and opening up new cross-border interactions. The ultimate benefit of all this, of course, is the promise of sustaining and nurturing wider prosperity.

This business boom is not just an isolated development limited to a few outlier countries. If these dynamics accelerate and attain critical mass in several major African economies, as I believe they will, the regional and global effects could be consequential. But there’s still a lot to be done.

Right now, it is still cheaper (and easier) to export something to another African country via Europe or Dubai than directly. Clearly, regional trade suffers as a result. And though capital flows to Africa have picked up, they continue to be well below what economists would expect given principles of comparative advantage, consumption and production patterns, and, of course, per capita income.

There are other pressing needs too. Africa can’t hope to really compete on the global economic front lines until it has broader electrification and a better transportation system. Unlike in decades past, however, the major driver needs to be the private sector, not some politician at a regional summit offering grandiose and unreasonable plans, or a celebrity do-gooder organizing a concert.

For the developed world, Africa’s rise is not about charity or even just improving the livelihoods of the millions who live on the margins of subsistence. A growing, more prosperous Africa would assist the much-sought-after global rebalancing, helping the world find a less volatile economic equilibrium. A rising Africa eventually would provide a long-term source of global aggregate demand and a destination to engage foreign capital that is now overheating a smaller set of developing economies.

All this sounds very appealing, and it is. It is also far from automatic. Africa’s rise can still be derailed by internal obstacles, especially the lack of adequate institutions in the public sector. Badly managed ministries and funding processes can contaminate development, especially if, rather than responding to people’s needs, they allow for a concentration of power that not only enables corruption but raises the incentive for the existing political order to block any changes to the system, no matter how beneficial for the common good. It’s no surprise then that African countries, on average, score in the bottom third of Transparency International’s Corruption Perceptions Index.

It is the responsibility of Africans to recognize and address these risks. Yet the rest of the world can play a role in ensuring that this time, Africa’s rise will be real and sustainable. The continent needs infrastructure projects, it needs risk mitigation, and it needs public-private partnerships that help build small and midsize businesses. What it doesn’t need is a mindset that eternally treats Africa as an aid recipient. But most importantly, the West needs to get its own house in order to prevent currency wars or another recession that could imperil global capital flows.

Count me among the growing number of people excited and hopeful about what’s happening on the ground in Africa. Markets are booming, and this time it’s not just gold mines and oil rigs; it’s a new generation of workers and entrepreneurs. Still a cynic? Don’t take my word for it — just follow the money.

Mohamed A. El-Erian is chief economic advisor at Allianz and the designated president of the University of Cambridge’s Queens’ College. Twitter: @elerianm