Should presidents seek out dissent? 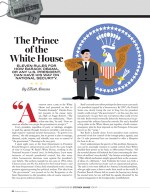 Presidents must do more than decide foreign-policy issues, Elliott Abrams contends (“The Prince of the White House,” March/April 2013). They must also “manage, demand, cajole, impose, and wheedle” the national security bureaucracy in order to get their way, advice Abrams distills into 11 — sometimes conflicting — Machiavellian rules for today’s “prince” in the Oval Office.

Presidents can either encourage or discourage dissenting opinions, and Abrams’s argument is at its strongest when he asserts that the president must let advisors “fight it out” so that he can evaluate alternatives and avoid a false consensus. In making this point, however, Abrams echoes the inaccurate claims of President Dwight Eisenhower’s Democratic critics, who asserted that Ike required consensus from his advisors and unquestioningly acted on their advice. In reality, Ike’s experience as supreme allied commander led him to demand that his aides “debate and argue with each other” in front of him before he made important decisions, he later said.

Ike was not trapped by his advisors’ consensus when in 1954 he rightly rejected the National Security Council (NSC) Planning Board’s recommendation to intervene in Vietnam in support of the French. On the flip side, President George W. Bush did not solicit contrary views before issuing his 2002 orders suspending the Geneva Conventions and encouraging the use of enhanced interrogation techniques. Insisting on hearing dissenting opinions on these issues might have saved him from defeats in the Supreme Court several years later. I would even argue that employing a deliberative, Eisenhower-like process with the NSC might have saved the United States from the 1961 Bay of Pigs invasion, the 1965 escalation of the Vietnam War, the 1980s Iran-Contra affair, or the 2003 invasion of Iraq.

But Abrams’s skepticism toward dissent goes deeper. When Defense Secretary Clark Clifford brought together a group of doves to advise President Lyndon B. Johnson on Vietnam in 1968, Abrams interprets this as disloyalty to the president. But right or wrong, the doves told the president what he needed to hear, rather than what he wanted to hear. In any case, LBJ ignored their advice, as was his prerogative. Friction between the White House staff (the “real” team, as Abrams calls it) and cabinet officials (“rivals for power”) is inevitable, and Abrams is right to note that cabinet members must be responsive not just to presidents but also to Congress, interest groups, and their own agencies. But presidents need to listen to cabinet officers; their departments have long institutional memories, and, after all, they implement presidential policies.

Abrams also overstates his case when he advises presidents to dismiss all career NSC officials immediately upon taking office. “These people need to go, and fast,” he writes, noting that holdover counterterrorism aide Richard Clarke criticized the Bush administration after leaving it. But when Clarke warned Bush about terrorist attacks prior to 9/11 — like LBJ’s dovish advisors — Clarke was telling the president what he needed to hear. After all, loyalty is not a reliable proxy for competence. Abrams has some good advice for presidents, but it is not self-evident when they should take it.

I appreciate James Pfiffner’s careful reading of my article. Where he and I may part company is the question of hunting up dissenting advice.

I suggested that a president must hear dissenting advice when it exists in his cabinet or national security agencies more generally. It should not be kept from him through some process of homogenization, nor obviously should it be suppressed. But I do not think there is an obligation to seek out contrary views when they do not exist or exist only in newspaper editorials or academic circles.

Pfiffner argues that presidents put themselves at a disadvantage when they do not seek dissenting advice before making important decisions and criticizes President George W. Bush (under whom I worked) because he “did not solicit contrary views” on some occasions and was not “insisting on hearing dissenting opinions.” This goes too far. If no national security officials or agencies offer a dissent and the Justice Department confirms the legality of the contemplated action, the president should not chase after objections.

As for listening to cabinet officers rather than ignoring them — sure. But taking their advice is something else again. That depends on the president’s estimation of just how smart, competent, loyal, and reliable that cabinet officer is. As we all know, in every cabinet the range is wide.