While the media obsessed over the missteps, Afghans were building a better future. 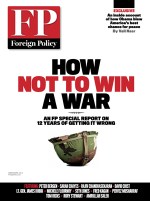 After a decade of international engagement, the progress made in Afghanistan stands as a testament to the power of partnership between the Afghan people and the international community, particularly the United States. Although change has not come without obstacles, Afghanistan’s economic, cultural, social, and political resurgence can only be described as a tremendous leap forward. In the end, we all want a better, safer future for our children, and our mutual goals will continue to overcome any obstacles we may encounter. We all want the opportunity to improve and provide a good life for our families, and we will continue to build that brighter future together.

Although the international media, including Foreign Policy (“What Went Wrong?” March/April 2013), have tended to focus on the missteps in my country over the past decade, Afghanistan, as Peter Bergen notes in “What Went Right?,” has in fact experienced enormous improvement in development indicators: an 18-year increase in life expectancy, the halving of the infant mortality rate, and the more than 8 million children — 40 percent of them girls — now in school. Afghans, with the support of their government and international partners, will ensure that these important improvements continue well beyond the 2014 end of NATO’s mission because they believe their country is on the right track.

Without our close partnership with the United States over the last decade, this rapid development could not have happened. After 10 short years, Afghanistan has emerged as a sovereign democracy about to enter its third election process and has fostered enduring partnerships to continue relations far beyond 2014. The challenge now is to make the last decade’s gains lasting.

Like the famous Afghan proverb says, even if a mountain is very high, it has a path to the top. As we forge ahead together, Afghans are ready to take responsibility for our continued growth and will sustain the record of progress developed over the last decade.

Is South Asia Prepared for the Wuhan Virus?

Ukraine’s Tragic Disappearance in the Fog of Impeachment