Is this a generationally significant change of power, or more of the same dysfunction? 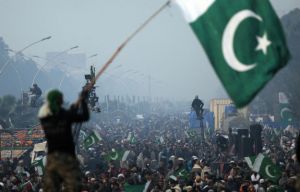 May 11 is election day in Pakistan, and the prognostications are pouring in. Election predictions are always risky, and especially so in a country that is plagued by unreliable opinion polling and hasn’t completed a census since 1998. Additionally, recent decentralization reform giving greater power to the country’s parliament and to provincial and local authorities has empowered a dizzying array of new political actors and movements. Saturday’s poll will be a confusing and complicated affair.

Predictably, the last few days alone have been filled with dramatic twists and turns. One high-profile candidate was abducted, while another was the victim of a freakish forklift accident. One vulnerable minority — women in the Bajaur tribal agency — was granted the right to vote, while another — several thousand transgender people in Khyber-Pakhtunkhwa province — was banned from doing so. Pakistan’s president issued an ordinance giving overseas Pakistanis the right to vote — after which the country’s election commission announced there wouldn’t be time to implement it.

With campaigning now concluded, the stories of the three major contesting parties are a study in contrast. The Pakistan People’s Party (PPP), led (from abroad) by the son of Benazir Bhutto, is the battered and besieged incumbent. The Pakistan Muslim League-Nawaz (PML-N), headed by former Prime Minister Nawaz Sharif, is the conventional favorite. And the Pakistan Tehreek-e-Insaf (PTI), chaired by wildly popular ex-cricket star and populist Imran Khan, is the upstart seeking to upset them both.

Yet don’t take these stock characterizations at face value. Saturday’s poll, as many are saying in Pakistan, represents the most unpredictable election in Pakistan’s history. That’s why we should be suspicious of those bold pre-election proclamations. Here are five of the more commonly heard ones, and why they’re problematic.

“The incumbent Pakistan People’s Party is going to lose badly.”

Not necessarily. President Asif Ali Zardari’s PPP, which led the government from 2008 to 2013, is deeply unpopular. Many blame it for the violence, energy shortages, and corruption that convulsed the country over the last five years. Yet don’t assume the PPP will suffer the shellacking that many are predicting. The party is, if nothing else, a survivor. It completed its term even after the Supreme Court dismissed one of its prime ministers (Yousaf Raza Gilani) and issued an arrest order for his successor (Raja Pervez Ashraf ). Most remarkably, Zardari, despite being dogged by corruption charges and despised by both Pakistan’s judiciary and powerful army, remains in his post today (and could be reelected when his term ends in September).

The PPP has pulled off electoral surprises before. In 1970, Zulfikar Ali Bhutto (father of Benazir) won a majority of seats in what was then West Pakistan — a result few people expected from the PPP, then a new and inexperienced party.

Though many rightly expect former Prime Minister Nawaz Sharif’s PML-N to triumph, a PPP election victory isn’t out of the question. A second-place finish is likely. The PPP’s stronghold in rural Sindh province has been spared the election violence afflicting other parts of the country, enabling it to consolidate the support of its rank and file. Additionally, Imran Khan’s ascendant PTI could siphon off votes from the PML-N in the latter’s stronghold of Punjab province. The PTI, drawing on its leader’s popularity, populist appeals for change, and denunciations of U.S. policies, has resonated deeply with Punjab’s urban youth.

“Imran Khan is poised for a big performance.”

Don’t bet on it. Despite the global media splash it has made, PTI’s prospects shouldn’t be overstated. It’s true, the most recent survey data shows it tied with the PML-N as the country’s most popular party, and Khan consistently polls as Pakistan’s most beloved politician. The PTI also draws some of the largest crowds and social media followings of any party.

Still, Pakistan’s political structure is deeply rooted in patronage — voters tend to reward those candidates who provide them with protection, gifts, or favors. Such offerings range from promises to appease powerful landlords to the provision of scholarships and new sewage facilities. This is why many Pakistanis will often express support for one party, attend its rallies, and “like” or “follow” it in social media, and then turn around and vote for a completely different party — that of their patron. While the PPP and PML-N enjoy extensive patronage networks, the PTI rejects the system altogether and instead relies on Khan’s personal appeal — a strategy with no track record of delivering votes (though some PTI partisans point to the charismatic Bhutto’s 1970 performance as proof that it can succeed).

Additionally, one of the PTI’s campaign platforms — reducing political corruption — may actually undercut its electoral prospects. In recent months, to underscore its own good governance intentions, the PTI held internal party elections — a time-consuming process that obliged it to reduce its nationwide campaigning just as other parties were ramping up their own. Furthermore, several recent PTI developments — including a rumored electoral alliance with a hardline Islamist party (which didn’t pan out) and comments critical of Pakistan’s persecuted Ahmadis (a minority Muslim sect) — could alienate the party’s liberal supporters. Admittedly, Khan’s recent fall from a forklift — and the inspirational hospital-bed speech that followed — may garner his party some sympathy votes. Yet to say that his tumble could carry him to victory is a bit far-fetched.

“U.S. interests in Pakistan are only going to deteriorate further.”

It can hardly get worse. Some, pointing
to the conservative, anti-American, and pro-Islamist orientation of the top-polling parties, believe this election will mark a further deterioration of already fraught U.S.-Pakistani relations. When current frontrunner Sharif was last prime minister, he triggered American sanctions after staging a nuclear test in 1998. In 2011, the PML-N-led provincial government in Punjab cancelled several U.S. civilian assistance agreements. Meanwhile, Khan has vowed to reject U.S. aid (he refers to it as a “curse”) and to shoot down American drones. Though Khan is unlikely to be Pakistan’s next prime minister, his party will remain a significant force in Pakistani politics — whether through heading a ministry in the next coalition government, or, more likely, through taking on a powerful role in the political opposition. The implication is that President Barack Obama’s administration should hope the PPP is reelected. It’s relatively liberal and pro-American and its return would ensure some much-needed continuity for a volatile bilateral relationship.

In reality, neither U.S. interests nor U.S.-Pakistan relations are likely to be affected by the electoral outcome. Certainly a government led by the PML-N may push back more than the PPP on flashpoints like the drone program and the endgame in Afghanistan. But these issues ultimately fall within the purview of the Pakistani military, not the civilian government — and thanks to the likes of Secretary of State John Kerry, the new Obama administration is on extremely good terms with Pakistani army leaders. For this reason, any anxiety in Washington about this Saturday’s political transition would be misplaced. Much more significant is a military transition later this year, when Ashfaq Parvez Kayani — often described as the country’s most powerful leader — ends his term as army chief.

“May 11 marks a watershed moment for democracy in Pakistan.”

Let’s not get carried away. Several weeks ago, this oft-repeated assertion was hard to dispute. May 11 marks the first time that one democratically-elected Pakistani government will hand power over to another. The election is meant to serve as an emphatic affirmation of Pakistan’s growing democratic credentials.

Unfortunately, it now appears the election will be a watershed for militancy, not democracy.  The Pakistani Taliban has launched a campaign of terror against relatively liberal and non-religious parties. Dozens have died, including at least 44 in less than 10 days late last month. The leader of one major political party, the Muttahida Qaumi Movement, has demanded the election be delayed — and authorities in two violence-riven localities have cancelled polls in their districts. The Taliban has now turned its attention to the general voting public, warning it not to turn out on May 11.

Whether the voting masses heed or defy this warning will determine if democracy is showcased or sidelined on Saturday. The electorate appears energized; a new British Council poll finds that 62 percent of Pakistanis under 30 — an age group comprising two thirds of the country’s total population — plan to vote. Another survey projects a 10 percent increase in turnout from the 44 percent in Pakistan’s last election.

“Whatever happens, Pakistan will have a new government on May 12.”

Don’t hold your breath. In Pakistan’s parliamentary democracy, the party receiving the most votes must gain an outright majority (translating to 172 of 272 National Assembly seats) to immediately form a government. However, it’s unlikely the victorious party will win by such a large margin. Neither of the two favored parties — the PML-N and PPP — is likely to garner enough votes in the other’s stronghold. Additionally, the PTI could attract enough votes from disaffected PPP and PML-N supporters (and from the fifth of the total electorate estimated as undecided) to prevent either party from greatly distancing itself from the other.

Consequently, days and even weeks may elapse while the winning party struggles to cobble together a governing coalition. Some smaller parties are eager to serve as junior coalition members. Others — such as the PTI, which at least for now has ruled out alliances — could be more stubborn. As this bargaining process plays out, aggrieved losing parties may take to the streets, with unrest likely. Election watchers have expressed concern that zealous young PTI supporters could resort to violence, though the presence of militant wings within so many different parties suggest the PTI wouldn’t be the sole instigator.

This transition limbo will further delay much-needed decisions on critical policy issues that have been deferred until after the election — requesting a fresh IMF loan to revive a rapidly sinking economy, and contemplating new military operations in the tribal belt, to name a couple.

If there’s one safe prediction to make on this election eve, it’s that Pakistan’s new leadership, when it’s finally in place, will have little time to savor its victory.