Bird of Chaman, Flower of the Khyber: Riding Shotgun From Karachi to Kabul in a Pakistani Truck

Bird of Chaman, Flower of the Khyber: Riding Shotgun from Karachi to Kabul in a Pakistani Truck

A reporter’s wild journey in the back of a Pakistani truck, from Karachi to Kabul through the treacherous Afghanistan-Pakistan borderlands. 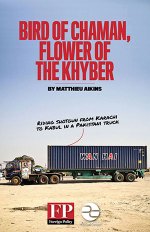 How do you supply an entire war in landlocked Afghanistan? Mostly by truck. In the fall of 2012, award-winning journalist Matthieu Aikins found out firsthand, riding in a rickety 1993 Nissan along the U.S. supply route, from the port city of Karachi into Pakistan’s scorching flatlands and lawless borderlands, then through the famed Khyber Pass and on toward the Afghan warzone. As he travels Pakistan’s dangerous, derelict roadways, Aikins observes how the crucial lifeline for the Afghanistan war has become wound up not only in the shady deals of Pakistani contractors and predatory police, but also in the lives of rural Pashtuns who over the last decade have left their tribal homelands for trucking jobs in droves — like the two hash-smoking brothers in whose cabin Aikins rides. In his six-day, 1,000-mile trip, Aikins confronts roadside bandits, Kalashnikov-wielding tribal patrols, and hawk-eyed toll guards (not to mention confinement in the truck’s blazing-hot cabin). The result — the second in the Borderlands ebook series from Foreign Policy and the Pulitzer Center on Crisis Reporting — is both a harrowing account of life on Pakistan’s highways and an anatomy of the way foreign military intervention can transform a society.

About the author: Matthieu Aikins lives in Kabul and has been reporting from Afghanistan and Pakistan since 2008. His feature writing and photography have appeared in American, Canadian, British, French, and Indian publications including Harper’s, the Atlantic, GQ, Newsweek, Foreign Policy, Wired, the Guardian, the Globe & Mail, the National Post, the Walrus, Courrier International, and the Caravan. He was a finalist for a 2012 National Magazine Award and the Livingston Awards for Young Journalists.