Is this worth a billion dollars?

Monday’s news that struggling Internet pioneer Yahoo! bought popular blogging site Tumblr inspired us to find the best foreign policy-related Tumblrs — loosely defined — on the ‘net. Several great ones that have come and gone deserve a mention, including the one-time-only Vladentines Day and the sadly obsolete but viral Texts From Hillary, but we chose to focus on those accounts that are (for the most part) still active. Scroll away! 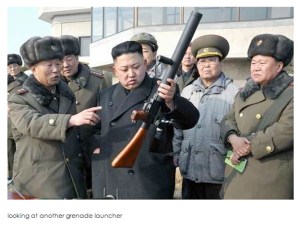 The only real glimpses the rest of the world gets into North Korea are through state-released photos of Kim Jong Un — photos, more specifically, as this Tumblr duly noted, of Kim Jong Un looking at things, a.k.a. providing “on-the-spot guidance,” just as his father did before him.

Taking advantage of widespread interest in a shrouded country, its photogenic supreme leader, and the wide range of curious situations in which he is pictured (gazing at South Korea, looking at a floor plank, inspecting a child’s track suit), “Kim Jong Un looking at things” is both a hit and an exposition. If there’s one blog that sums up the bizarre, ridiculous, and fascinating nature of North Korea, its bizarre leader, and its propaganda machine, it’s this one. 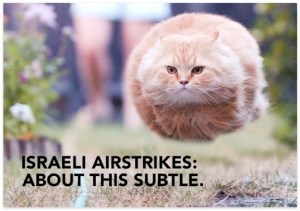 International Relations as Depicted by Cats

In one of the recent photos posted on “International Relations as Depicted by Cats,” a cat is pictured suspended half in, half out of a fish tank, clinging to the edge while gazing at the fish swimming below. You’re unsure whether the cat is trying to climb out or drop in; in the meantime, it has no choice but to hold its position. The caption reads: “American stance on intervention in Syria.”

IR Cats goes on to successfully depict topics from “unbalanced multipolarity” (a pile of different sized cats facing different directions) to “China on North Korea” (a cat “in between a kim and a hard place”) to “moderates” (a small cat cowering under a hat), proving that sometimes a picture of a cat really is worth a thousand words. 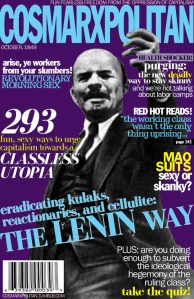 In March, FP blogger Tom Ricks pondered how communism — one of the most (if not the most) defining factors of the 20th century — will be remembered 500 years from now. Is it possible that Cosmarxpolitan, which incisively reduces nearly a century of communist ideology, leadership, and purging to teenage magazine cover sound bites (“Karl in the bedroom: ‘From each according to his ability, to each according to her needs'”), provides the answer?

It was only a matter of time before Ryan Gosling memes made their way into the realm of foreign policy. Though both these Tumblrs haven’t posted anything since 2012, they are worth a mention for showing us that, when preceded by a simple “Hey Girl,” even the most clinical fo-po jargon can take on new meaning. 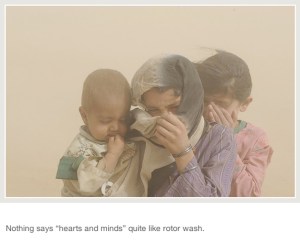 “Its Always Sunny in Kabul” is mostly sardonic but sometimes sincere in its mission to find “the silver-ish lining in Afghanistan’s Emerald City.” The caption to one photo, of bureaucrats around a conference table, reads, “This is what it looks like when people talk about having further talks.” Another pictures “uh-dorable kids in uniform of the day.” With a few pictures and sarcastic captions, the author, a development worker who has set up shop at “The Republic of Snarkistan” and tweets as @ElSnarkistani, regularly challenges the argument that Peter Bergen made for FP in March: that Afghanistan is better off than is commonly thought.