To Boldly Go Across the Hexagonal Board

We play the board game in which Starfleet is a bunch of imperialist jerks.

For a civilization that prides itself on being peaceful, the United Federation of Planets has a knack for getting into wars. It has battled Klingons, Romulans, Cardassians, the Dominion, the Borg, plus numerous other alien races and creatures. Gene Roddenberry may have envisioned the 23rd century as a utopia of peace and prosperity, but one has to wonder whether a day passed without some starship captain giving the command: “Fire phasers.”

So with the debut of the newest Trek film, the aptly named Star Trek Into Darkness, with its focus on the question of militarism, it seems appropriate to examine the game in which the Federation is just another empire out to maximize its power. Star Trek: Fleet Captains is a board game that pits the Federation against the Klingons (and also the Romulans in the optional Romulan Empire expansion) in a fight for space supremacy.

The most striking aspect of the game is its 24 plastic Federation and Klingon starships  (plus another 12 Romulan ships in the expansion). Most board game ships look more like tiny lumps of half-baked dough than mighty war vessels, but the size and detail of the Fleet Captains figures (the Romulan Valdore-class Warbird is two inches long and three inches wide) is impressive. This is one advantage that a Trek board game has over video games like the recent Star Trek shooter. Even if you can’t skipper the real Enterprise, you can hold it in the palm of your hand. Just try that in a video game, redshirt! On the other hand, while the quality of the miniature ships is good, the cards and map hexagons are made of thin, fragile cardboard, which is unfortunate for a game that costs around $100.

Star Trek: Fleet Captains is played on a series of large cardboard hexagons that are randomly drawn to create the game board. Each hexagon starts on its blank side until explored by a player’s starship, and then is flipped over to reveal stars, habitable and uninhabitable planets, a nebula, a black hole, or just empty space. The exploring player rolls dice to see if an Encounter card is drawn, which could result in something good (an abandoned outpost for the taking), something bad (a supernova, or Romulan ale to intoxicate the crew), or something weird (the Q or the Mirror Universe).

The core game has Federation versus Klingons, plus a Romulan player if the expansion is included. Each player randomly chooses ships until a fleet of a certain size is assembled, and a side will have four to six starships in a mix of heavy and light vessels. Each ship miniature has a dial on its base that shows how power is being allocated among weapons, shields, sensors, and engines. Players will constantly change those allocations because no ship can adequately distribute power to all four areas, so a vessel will maximize sensors if exploring, and shields and weapons if expecting combat. The problem is if the Enterprise is configured for exploration when it is jumped by a Klingon battlecruiser. It is safer to maximize weapons or shields, except that nasty things encountered during exploration usually require ships to use their sensors rather than weapons to survive. Photon torpedoes won’t hurt a supernova, and will just make the Organians sigh at the silly corporeal lifeforms.

Players take turns moving their ships, exploring uncharted space, engaging in combat, and building outposts on habitable worlds, which can gradually be expanded into colonies and then starbases that are useful for repairing battle-damaged ships. Combat is determined by comparing weapons to shield strengths and then rolling dice, with attacker and defender both able to toss in Command cards to influence the outcome. There are rather elaborate rules for cloaking devices that involve placing decoy ships on the map. Victory is achieved by building installations and by completing various “mission cards,” which award victory points for tasks like building a certain number of colonies or destroying a specified number of enemy starships.

All of this makes for a good empire-building game, but where is the Trek in all this: the heroic starship captains, the bellicose Klingons and cunning Romulans, the alien women in miniskirts? A board game can’t help with providing nubile aliens, but Star Trek: Fleet Captains cleverly adds Trekiness — that 50-year mass of Trek trivia that is mother’s milk to geeks — through Command cards, each of which comes with a photo from one of the numerous Trek series and movies, plus a bit of flavor text.

A fascinating feature is that each race has its own deck of Command cards that tend to reflect the characteristics of that race. Thus the Federation has cards like Photon Torpedoes, Advanced Sensors, and the Prime Directive; the Klingons have Battle Rage, Honorable Warrior, and Surprise Attack; while the Romulans have Plasma Torpedoes, Ambush, and Surprise Attack.

Each race’s deck is broken down into 10 sub-decks that emphasize various capabilities. The Federation has a Strange New World sub-deck that favors exploration, Evasive Maneuvers for enhanced defense, Heavy Security for more powerful offense, Captain Kirk and Captain Picard sub-decks that confer benefits when those officers are in command of a specific starship (mercifully, there is no Captain Janeway deck with Motivate Your Crew by Nagging cards). The Klingons are combat-heavy with the Way of the Warrior, Science of War, Imperial Expansion, and House of Martok sub-decks. The Romulans tend to favor sabotage and surprise attacks with sub-decks like Invisible Threat, Manipulation Agenda, Subterfuge, and Tal Shiar (the Romulan secret police). 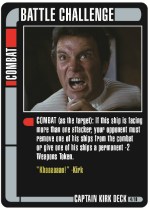 However, there is a catch: at the beginning of a game, a player must choose only 4 of 10 sub-decks to draw Command cards from. This is probably the most crucial decision, because it determines capabilities for the course of the game. Thus much like U.S. defense planners, players can configure for a wide spectrum of capabilities at the risk of being strong in none, or putting all their eggs in one basket, without being sure of just how their opponents have configured their options. I learned this playing the Federation with exploration-centric decks, aiming for a long game that would enable the Feds to build up enough colonies to win. What it got me was vaporization delivered by a Klingon fleet packing some powerful combat cards like Heavy Disruptors. Should a U.S.-China war ever erupt, I suspect both sides will undergo a similar learning experience.

To quote my favorite Klingon commander, Captain K’Noob, “never bring a bat’leth to a phaser fight.”