The starchitect on his first project in the Arab world -- and why it's hard these days to find a benevolent dictator with taste. 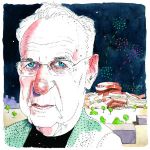 Ask someone to name a living architect, and it’s a good bet the first name you’ll hear is Frank Gehry’s. The Canadian-born, California-based Pritzker Prize winner virtually created the idea of the celebrity globe-trotting architect, with his iconic Guggenheim Museum Bilbao single-handedly revitalizing the sleepy Spanish port city in 1997 and launching his career into the stratosphere — at the ripe young age of 68. “I’ve had a good run at being relevant, but I want to be more relevant!” he says. “I would like to do a big project in Outer Mongolia — I don’t care where.” Now 84, Gehry is still involved in every detail of his firm‘s buildings, from undulating skyscrapers in Manhattan to twisted luxury residences in Hong Kong. Foreign Policy spoke with the starchitect on his plans for the future, his long-delayed first project in the Arab world, and the trouble with democracy.

The worst thing is when you go to places like Dubai. They’re on steroids, but they just end up looking like American or European cities with these anonymous skyscrapers — like every cruddy city in the world. One would hope there would be more support from within these places for architecture that responds to the place and culture. That’s what I’m trying to do, but, man, no one else seems to be involved with it. It’s just cheap copies of buildings that have already been built somewhere else.

I was a bit reluctant to get engaged in the Guggenheim Abu Dhabi. It’s so far away and the cultural issues seemed so different. I had never worked in an Arab country. What I bought into, when we talked to the sheikhs and the deciders, was that this was going to be a museum for a globalized art culture. I don’t know of another museum in the world that will have the resources to show off this new era of contemporary art.

We hired a human rights lawyer from Human Rights Watch when we started on the Abu Dhabi project. Both we and our client were interested in making sure the project was in the clear. There was a time when they were being beat up on for the conditions of temporary workers. And they did something about it: They built relatively comfortable camps. These issues are important to me when I take a project.

If we’re hired to do a project in China, we’ll make it the best. We’re hoping to do a little museum there, in Quanzhou, our first mainland project. The artist Cai Guo-Qiang likes my work, and it’s his hometown. He paid for the initial design, actually. The Communist Party secretary wrote me a letter to say that she loves it. But whether we’ll get to build it, I don’t know. It’s hard to work in China.

There’s just not that many people doing capital “A” Architecture anymore. A lot of people don’t get it, but I design from the inside out so that the finished product looks inevitable somehow. I think it’s important to create spaces that people like to be in, that are humanistic. This neo-minimalism supercold stuff is weird to me. I need a place where I can come home and take my shoes off.

Hillary Clinton, in her farewell speech as secretary of state, picked up on a theme in my work. It was very cool, but I was shocked when she mentioned me! She said that my work was “intentional,” that political structures have to look beyond Greece, beyond columns, to a new architecture for a new world — like Frank Gehry, she said. Democracy, obviously, is something we don’t want to give up, but it does create chaos. It means the guy next door can do what he wants, and it creates a collision of thinking. In cities, that means people build whatever they want.

I think the best thing is to have a benevolent dictator — who has taste! It’s really hard to get consensus, to have a tastemaker. There is no Robert Moses anymore. Michael Bloomberg wants to be one. In fact, he promised he would build 10 more of my buildings in New York, but, you know, he hasn’t yet. Architecture’s difficult … [sigh].