In Search of Mickey Li’s

Why doesn't China have its own fast-food mega-chain?

SHANGHAI — Under the arches of the Zhongshan Park elevated railway station, there’s a joint where I’ve been catching quick lunches for years. I first went in, nearly a dozen years ago, because the sign over the door caught my attention: Zhen Gong Fu (“Real Kung Fu”), next to a cartoon picture of Hong Kong martial arts legend Bruce Lee in full flight, about to deal a lethal blow.

It was modern Chinese kitsch, something novel for Shanghai at a time when most lunch places here were undecorated mom-and-pop eateries, and I remember thinking: The owner must be a genius. Surely, Real Kung Fu with its cheap chicken-and-rice staples and globalized gloss would soon be everywhere, the answer to the question I often heard from businesspeople, tourists, and students in China: Where is the Middle Kingdom’s answer to McDonald’s? 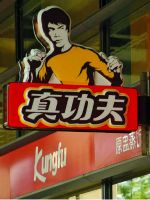 There’s certainly a market for it. China already wolfs down more than $160 billion in Westernized fast food from McDonald’s, KFC, and others each year, according to Mintel, the market research firm where I work. Back in 1987, KFC opened its first branch in China; it now has more than 4,000 locations here. McDonald’s came along a few years later, in 1990; it’s currently pushing 2,000 franchises. And relative newcomers like Subway and Burger King are planning hundreds of new outlets across the country. But my good friends at Real Kung Fu have managed, after nearly 15 years, to open just 480 stores. McDonald’s it’s not.

But why? It’s an acknowledged fact of the globalization era that pretty much everyone likes Chinese food: From Accra to Zagreb, it’s not hard to find a decent Cantonese or Sichuanese restaurant. So why do the Chinese, so adept at replicating and re-engineering everything from Caterpillar bulldozers to iPads, find it so stubbornly difficult to replicate a McDonald’s for local food?

There are any number of theories. My favorite is simply this: China may have only one time zone, but it has no national cuisine. That’s not to say you can’t find great food just about everywhere, just that there’s no one thing that Chinese crave everywhere — think of this as the cheeseburger-with-fries problem. It seems so paradoxical: Food in China is nothing if not quick, cheap, and filling, the foundation on which fast food is built. But it is also very much local. I have yet to go to a Chinese city that doesn’t have a superb delicacy to call its own: Gorgeous Shanghai soup dumplings (xiaolongbao) impregnated with pork gravy cost just pennies; crispy fried stinky tofu (chou doufu) in Changsha is equally cheap; and then there’s Beijing’s salty jianbing pancakes stuffed with fresh chives and also available for almost nothing, just like Sichuan’s spicy hot pot, Guangdong’s delicate dim sum, and Yunnan’s sumptuous “crossing the bridge” noodles (guoqiao mixian). It’s all delicious and inexpensive. It’s just not the recipe for a national fast food.

The second reason is bad governance. For all the Communist Party’s prowess in standardizing education, military service, and urban planning, it is remarkably inept at — or indifferent to — food. Poorly enforced food-safety standards and erratic business-licensing codes mean setting up a roadside stall is an easy, cheap entrepreneurial activity. Street vendors, fresh markets, and entire streets of small family businesses dedicated to a particular dish, say, beef jerky or cold tofu, all still militate against standardization. Yes, things are changing: Hypermarkets and convenience stores are popping up everywhere, and China now has thousands, if not hundreds of thousands, of food-processing companies turning out ready meals, prepackaged foods, and canned beverages — but specialization and regionalism still rule.

Think of China’s food culture in the same way you might think of the European Union — as a large landmass where old borders between languages and cuisines endure, even as crossing those borders has become easier than ever. Over the years, I’ve talked to northern Chinese migrants in the sweaty factories in Shenzhen who still prefer noodles to rice, Sichuanese construction laborers in Shanghai who long for chicken blood-filled hot pots, and Muslim Uighurs eating cumin-scented lamb skewers in a Beijing back street. Nothing beats the taste of comfort food for someone working 18 hours a day thousands of miles from home.

The third reason is hygiene. When Mintel surveyed customers at foreign fast-food joints in China, most thought the food at local chains was tastier than at places like McDonald’s. But only 4 percent of Chinese surveyed thought local fast-food joints were more hygienic than Western ones. And with China now convulsed by fears over food safety, from melamine-tainted milk to steroid-enhanced pork to chickens carrying a deadly flu, this is no small concern. Choosing McDonald’s in Shanghai isn’t so much a lifestyle choice as self-protection. That vendor in the alley across from the Golden Arches may have the tastiest grub in town, but then again, you might just be eating grubs.

Cleanliness alone doesn’t explain it, though. Nor does novelty. We’re now long past the point when a Big Mac represents a taste of something exotic and Western. Most teenagers in Kunming today probably don’t even recall a time when there wasn’t a KFC on the corner. And that might just be the point: What these Western chains all have in common is their success at transcending their foreignness in China. They’ve managed to become what the marketing gurus now call “glocal” brands. That’s why you’ll find a burger slathered in teriyaki sauce followed by a red bean pie at McDonald’s in China, and why the “Dragon Twister” — a wrap of fried chicken, cucumbers, scallions, and duck sauce — has long been a bestseller at KFC in the Middle Kingdom. (It’s not bad, but at $4.40 for a Twister, drink, and tub of sweet corn, you can do a lot better.)

This spring, trying to set a good example for my staff, I became determined to get into the office early and opted for the KFC breakfast offering en route. At 7:30 a.m. on Shanghai’s Fuzhou Road in the city’s heart, I found myself sitting with dozens of black-suited bai ling (white collar) office workers. The KFC breakfast menu is decidedly local: youtiao (deep-fried traditional Chinese dough sticks), shaobing (sesame-flavored bread rolls), and coriander-flavored congee (rice porridge). No scrambled eggs and toast in sight. And it’s a big hit. A Chinese colleague of mine, Lily, stops three mornings a week at a KFC near our office for breakfast after dropping off her daughter at kindergarten. She has never been tempted by a McDonald’s Egg McMuffin, but she loves her morning youtiao. Until a year ago, she used to pick them up from a street vendor nearby for half the price, but he got busted for using “gutter oil” (recycled grease collected from restaurant fryers, drains, grease traps, or slaughterhouse waste), which drove her into the loving arms of the KFC’s hygienic embrace.

MY SHANGHAI REAL KUNG FU is still around — even flourishing. The once-dirty floors are now mopped every hour; the dog-eared paper menus have given way to illuminated menu boards that hover over high-tech registers manned by smiling, uniformed employees who move almost robotically from counter to kitchen and back. Real Kung Fu promises your entire meal within 60 seconds of ordering or your money back, and I have yet to claim a refund for my favorite dish, the really rather good chicken-and-mushroom rice. They’ve learned a few tricks.

The same can be said of other vastly improved and emerging local fast-food places, such as Mandefu and Baijila, small-scale Chinese chains doing slightly Westernized variants of local favorites, complete with knockoff Western logos — Mandefu’s red and yellow sign front owes more than a bit to McDonald’s palette, while Baijila taunts KFC with a slightly feminine Colonel Sanders.

But China’s up-and-comers, its aspiring middle class, prefer the status of the real thing. McDonald’s and KFC are still largely the preserve of the bai ling and young families on the make, who go for a little taste of things foreign, and a sign perhaps that they really are moving up. As Warren Liu, a former KFC senior executive, has written, when the chain’s first restaurant opened just outside Tiananmen Square back in 1987, “Customers were attracted to KFC’s Chinese brand name; its American roots; its likeable, grayish, beard-bearing brand spokesperson — Colonel Sanders; the unique restaurant décor; the new way of ordering food; the bright red and blue colors of the brand logo; the American music broadcast inside the restaurant; and, as an added bonus, a very clean toilet!” That’s mostly all still true.

Around the corner at my local noodle shop, the average customer is decidedly a step down on the socioeconomic ladder, largely from the city’s army of waidiren (migrant workers) who need to watch every yuan. Tom Miller, author of the recent book China’s Urban Billion: The Story Behind the Biggest Migration in Human History, has observed this phenomenon closely. “If the economy works out right for this army of labor,” Miller says, “then maybe someday soon they’ll get in line at KFC, but for most that moment is not quite yet.”

The truth is: The Chinese people are both aspirational and eminently sensible when it comes to partaking of the benefits of global capitalism. Great cars come from Germany, luxury fashion from France and Italy, and fast food from America. And the hundreds of millions who make up China’s new middle class want the best of everything: Audi cruisers, Gucci purses — and, it would seem, KFC’s Dragon Twister.