It's not what the World Bank's president is cooking up.

Could a “social movement” end poverty within a generation? That’s what Jim Yong Kim, the president of the World Bank, said last week in Washington. He may be right, but he’s also got the wrong kind of movement in mind.

Kim envisions a global movement where people from dozens of countries come together to fight poverty by making huge social investments and demanding progress on issues like corruption and climate change. But that’s not the most direct way to help economies grow and raise the purchasing power of poor people.

Economic growth happens when the work force either expands or becomes more productive. The Kama Sutra suggests many ways to achieve the former, but there are only two ways to achieve the latter: give workers control of more physical capital, or give them better technology. In practice, this usually means moving workers into cities and adopting production techniques and product designs already established in other countries. The last ingredient is trade, which can bring more capital and ideas into the country.

This simple sequence of urbanization, industrialization, technology adoption, and exports is essentially the story of growth in East Asia and some other countries scattered around the world. It is an almost foolproof recipe for higher incomes, though of course it says nothing about the distribution of those incomes.

There is still plenty of scope to follow this recipe in poorer regions like sub-Saharan Africa. Compare the following three graphs, each of which compares the urban share of countries’ populations to their per capita purchasing power, using data from the World Bank: 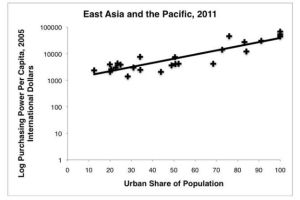 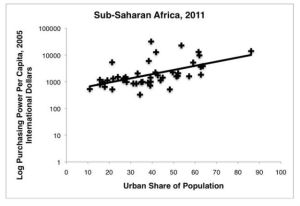 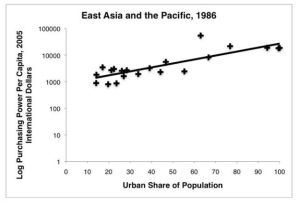 The first graph plots urbanization against incomes in East Asia and the Pacific in 2011, and the second does the same for sub-Saharan Africa. Clearly, both regions show a strong relationship between living in cities and buying power. Once people get off the farm, they can work in factories and service operations with greater specialization and economies of scale. It’s also easier to reach people with essentials like energy and health care when they live close together.

Though the slopes of the relationships are similar in the two graphs, the purchasing power that corresponds to a given level of urbanization is consistently lower in sub-Saharan Africa. Even with urbanization, some factors are holding back incomes in the region.

There’s not much mystery about what those factors are. With its borders imposed by foreign powers, sub-Saharan Africa suffers an apparently endless string of civil and regional conflicts. Global politics have also played a role, as countries in Africa have enjoyed free access to the world’s biggest export market — the United States — only since 2000, and even then have faced hurdles to exports.

There are also many more landlocked countries in sub-Saharan Africa, making commerce more difficult. And then there is the matter of disease, which springs up more readily in tropical zones. Sub-Saharan Africa may be known for epidemics ranging from HIV to Ebola, but respiratory and intestinal diseases are just as prevalent.

East Asia had its own problems with public health and diseases including malaria, yaws, and flu. Dengue continues to affect the region, but the other diseases are steadily coming under control. East Asia also had its share of violence, but most of its countries have been fairly peaceful since the end of the Vietnam War. Moreover, those that once battled the United States got access to the American market much earlier than sub-Saharan Africa, thanks to post-conflict diplomacy.

That’s where the third graph comes in. Winding the clock back 25 years, the best-fit line for East Asia in 1986 looks pretty similar to the one for 2011; it sits a bit lower, but still above the line for sub-Saharan Africa in 2011. This difference over time may just signify the accrual of a quarter-century worth of new technology; the overall environment for growth in East Asia hasn’t changed very much.

Yet this is the key to sub-Saharan Africa’s future. Its ability to grow can improve quickly if its countries can enhance the overall environment for that simple sequence of urbanization, industrialization, technology adoption, and exports. Right now, however, much of the time and money devoted to its “development” — especially when foreigners have a say — goes to things like raising crop yields, building bridges, and local programs to bolster health and education. These efforts can make a difference to people’s lives, but they are not necessarily addressing the main factors holding down sub-Saharan Africa’s best-fit line.

An alternative approach would pursue the recipe for growth more directly. For urbanization, people need title to their land (so that they can sell it or use it as collateral), freedom of movement inside their countries, and information about opportunities. To speed industrialization, countries can strengthen property rights (to ensure investors receive their returns), relax capital controls, and protect foreigners against expropriation and self-dealing by local partners. Faster adoption of technology arrives with the chance to import foreign goods and learn new ideas via global networks and media, as well as the opportunity to travel, study, and work abroad. Access to export markets is usually the culmination of years of diplomatic effort and regulatory grunt work. And ending conflict can help all of these steps at once.

These changes require more political will but also fewer resources than the multi-billion-dollar aid and investment programs that stretch across the globe. So perhaps Kim is right — ending poverty does require a movement, but it’s a movement of citizens in individual poor countries rather than a global movement propelled by big companies and non-governmental organizations. Only when citizens demand new policies that directly support growth will their countries be able to follow the recipe that has worked so well in other places.