The Greatest Doomsday Speeches Never Made 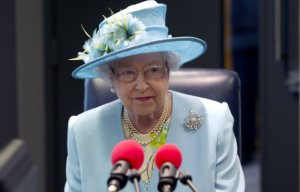 On Thursday, the British National Archives released the script for a hypothetical 1983 speech that would have been delivered by Queen Elizabeth II in the event of a global nuclear war. The speech, written as if broadcast at midday on Friday, March 4, 1983, was drawn up as part of a war-gaming exercise conducted at a time of high tensions following Ronald Reagan’s “evil empire” speech and NATO’s “Able Archer” excercise.

In the speech, the queen refers to her childhood during World War II and to the famous 1939 speech by her father, King George VI, announcing the outbreak of war with Germany:

Now this madness of war is once more spreading through the world and our brave country must again prepare itself to survive against great odds.

I have never forgotten the sorrow and the pride I felt as my sister and I huddled around the nursery wireless set listening to my father’s inspiring words on that fateful day in 1939. Not for a single moment did I imagine that this solemn and awful duty would one day fall to me.

We all know that the dangers facing us today are greater by far than at any time in our long history. The enemy is not the soldier with his rifle nor even the airman prowling the skies above our cities and towns but the deadly power of abused technology.

But whatever terrors lie in wait for us all the qualities that have helped to keep our freedom intact twice already during this sad century will once more be our strength.

Elizabeth would also have referred to her “beloved son Andrew,” who was at that time serving in the Navy.

Neither this speech, nor any like it, was ever given. But it joins the ranks of famous doomsday speeches and dramatic statements on war and peace that were prepared but — thankfully for all of us — never delivered.

Last year, the John F. Kennedy Presidential Library released the speech that had been prepared in the event that the United States launched airstrikes against Cuba during the high-stakes missile crisis of October 1962.

“My fellow Americans, with a heavy heart, and in necessary fulfillment of my oath of office, I have ordered — and the United States Air Force has now carried out — military operations with conventional weapons only, to remove a major nuclear weapons build-up from the soil of Cuba,” Kennedy begins.

The United States of America need not and cannot tolerate defiance, decaption and offensive threats on the part of any nation, large or small. Nuclear weapons are so destructive, and ballistic missiles are so swift, that a sudden shift in the nature of their threat can be deeply dangerous — especially when the trigger appears to be in the hands of a violent and unstable revolutionary leader. […]

If the 1930’s taught us any lesson at all, it was that aggressive conduct, if allowed to grow unchecked and unchallenged, will ultimately lead to war. This nation is opposed to war — but it is true to its word.

According to some accounts, Kennedy’s normal speechwriter Ted Sorensen, who was staunchly opposed to airstrikes, refused to write the speech, so it was drafted by National Security Advisor McGeorge Bundy.

While Kennedy appeals for U.S. citizens to remain calm and calls for talks with Soviet Premier Nikita Khrushchev to discuss the situation, it’s quite possible that this speech, if delivered, would have marked the beginning of a nuclear war. 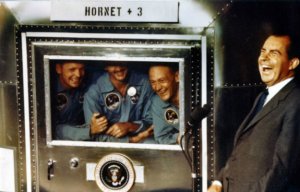 Nixon: Death on the Moon

In July 1969, legendary speechwriter William Safire drafted a speech — considered by some to be among his best — for President Richard Nixon to deliver in the event the Apollo 11 astronauts were unable to return to earth:

Fate has ordained that the men who went to the moon to explore in peace will stay on the moon to rest in peace.

These two men are laying down their lives in mankind’s most noble goal: the search for truth and understanding.

What makes the speech particularly macabre reading today is the use of present tense. Nixon says the men “are laying down their lives,” and a supplementary note attached to the remarks specifies that before speaking the president should telephone the “widows-to-be.” Aldrin and Armstrong would have been trapped on the moon listening to their own eulogy.

Eisenhower: The Failure of D-Day

The day before the invasion of Normandy on June 6, 1944, Gen. Dwight D. Eisenhower, the Supreme Allied Commander, wrote down a statement to be delivered if the Germans were able to repel the attack. It read:

Our landings in the Cherbourg-Havre area have failed to gain a satisfactory foothold and I have withdrawn the troops. My decision to attack at this time and place was based on the best information available. The troops, the air, and the Navy did all that bravery and devotion to duty could do. If any blame or fault attaches to the attempt it is mine alone.

Eisenhower carried the handwritten note in the wallet throughout the operation, but fortunately never had to deliver it. 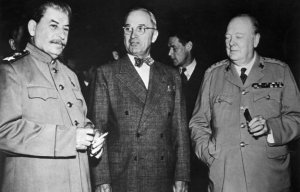 On Sept. 11, 2001, then-National Security Advisor Condoleezza Rice was due to deliver a speech at Johns Hopkins University’s School of Advanced International Studies on “the threats and problems of today and the day after, not the world of yesterday.” The speech was never delivered — Rice spent much of the day in a bunker with other members of the Bush administration national security team — but it pointedly focused on missile defense, rather than prevention of non-state terrorism — as a priority:

We need to worry about the suitcase bomb, the car bomb and the vial of sarin released in the subway. [But] why put deadbolt locks on your doors and stock up on cans of mace and then decide to leave your windows open?

The full text of the speech was never released by the Bush administration, but according to the Washington Post, Rice intended to note disapprovingly that “the United States had spent $11 billion on counterterrorism, about twice as much as it spent on missile defence, during the previous year.”

Rice made good on her promise to SAIS by delivering a speech on Sept. 11, 2002, focusing almost entirely on the threat of international terrorism.

Truman: What the ‘Russkies’ Understand

On June 12, 1948, U.S. President Harry Truman, then deeply unpopular and looking ahead to a grueling re-election fight, gave a national radio address from the University of California, Berkeley in which he placed the blame for rising Cold War tensions solely with the Russians. “The refusal of the Soviet Union to work with its wartime allies for world recovery and world peace is the most bitter disappointment of our time,” Truman said, concluding, “the only expansion we are interested in is the expansion of human freedom.”

It was a blunt speech, but it was downright genteel compared to the original draft Truman had written, published years later along with his private papers. Discussing his disappointments with the Russian government following the 1945 Potsdam conference between the allied leaders, Truman would have said, “I had the kindliest feelings for Russia and the Russian people and I liked Stalin. But I found after a patient year that Russian agreements are made to be broken.”

Truman says he had come to realize that the United States had demobilized its armed forces too quickly after the war because “mamma and papa and every Congressman wanted every boy discharged at once after Japan folded up.” He argues for the United States to maintain universal military training, concluding, “our friends the Russkies understand only one language — how many divisions have you — actual or potential…”

Probably a good thing he made some revisions.