With his purchase of the Washington Post, the Amazon founder joins the ranks of other millionaires and billionaires who are reshaping the global media landscape.

"I have a most surprising announcement." With those words, Don Graham, the Washington Post Company's chairman and chief executive, dropped a bombshell on the newspaper that has been in his family for four generations. The family would sell, Graham announced, to Amazon founder Jeff Bezos.

Bezos now joins that most exclusive of clubs: plutocrats with newspapers. With his $250 million purchase of the Post, the Internet entrepreneur joins the growing ranks of the global media elite, an eclectic group of outsize characters who have cashed in on and backed the world's most powerful media companies. 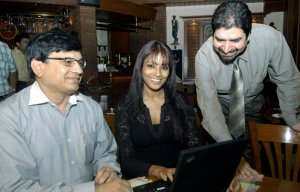 “I have a most surprising announcement.” With those words, Don Graham, the Washington Post Company’s chairman and chief executive, dropped a bombshell on the newspaper that has been in his family for four generations. The family would sell, Graham announced, to Amazon founder Jeff Bezos.

Bezos now joins that most exclusive of clubs: plutocrats with newspapers. With his $250 million purchase of the Post, the Internet entrepreneur joins the growing ranks of the global media elite, an eclectic group of outsize characters who have cashed in on and backed the world’s most powerful media companies.

The woes of the newspaper industry are well-known, but in India the Internet revolution that has beset Western newspapers is nowhere to be seen. In fact, India’s broadsheets are thriving. At the forefront of this surprising renaissance in newspaper publishing are Samir and Vineet Jain, the men behind the world’s largest paper by circulation, the Times of India. Together, Samir and Vineet (the latter is pictured above, left) have taken a publishing empire and turbocharged it. Pursuing an aggressive advertorial strategy, the brothers have made the Times the country’s most read and most important paper. But in doing so they have adopted a controversial editorial strategy. As detailed in a marvelous profile of the two men by the New Yorker‘s Ken Auletta, Samir and Vineet have taken to selling an “aspirational” editorial product, one in which content is often for sale to the people the paper covers. Bollywood stars and celebrities buy coverage in the paper to boost their profiles. A disclaimer that the coverage has been purchased is provided only in the finest of fine prints.

In India, the traditional constraints of newspaper publishing do not apply. Internet penetration is nowhere near what it is in the United States, and rapidly rising literacy rates means an increasing appetite for newspapers and the written word. This the Jain brothers are only too happy to provide. But their main goal is not to hold power to account. They freely admit that they do not consider themselves in the newspaper business; rather, they are in the advertising business. Their job, they say, is to help companies achieve their goal of increasing consumption of one product or another. To that end, content is available for purchase. More importantly, writers at the paper allege, stories about the paper’s advertising partners are off limits. Instead, the paper offers a happy, sanitized version of its chaotic homeland. Death rarely features. Government accountability stories rarely make the grade.

It’s a strategy that has made the brothers rich and the most important media moguls in India. The family matriarch, Indu Jain, is estimated to be worth $2.2 billion. 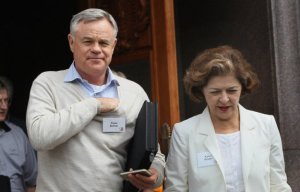 In 1984, South African publishing houses were on the ropes, steadily losing revenue to their television competitors. Nasionale Pers, an established Afrikaaner publisher, was one of those organizations when, out of the blue, a young Columbia Business School student named Koos Bekker wrote to the company with an idea for revitalizing it. Inspired by the success of HBO, Bekker convinced the company’s executives to push into the pay-for-TV market, a move that gave the organization a much-needed shot in the arm. That same firm is now called Naspers and has established itself as the pre-eminent force within African media. With operations in at least 130 countries, it has significant holdings in the South African newspaper, magazine, and book markets, in addition to its large paid TV interests. With a 1-percent stake in Facebook, a 29-percent stake in the Russian email behemoth Mail.ru, and a 35-percent interest in the Chinese chat service Tencent, the company is also becoming an Internet player in the developing world. As a result, Bekker, whose fortune is estimated at $450 million, has been crowned the Rupert Murdoch of South Africa.

But Bekker is uncomfortable with the idea of being compared to Murdoch, and the differences between the two media moguls are marked. Whereas Murdoch’s News Corp. remains predominantly a newspaper, television, and entertainment company, Bekker has encouraged his company to make greater investments in digital start-ups. More importantly, Bekker does not look favorably on Murdoch’s political activism. “He is an ideologue, and that is dangerous,” Bekker told the South African writer Anton Harber. But as Harber points out in his excellent profile of Bekker, the media mogul’s investments make him a bedfellow with regimes that bear a startling resemblance to the apartheid society of which his company was once a fixture. The company’s involvement with Tencent, for example, makes Naspers complicit in Chinese censorship policies that have driven other multinational media firms to cease operations there. That, however, is also where the company’s future lies.

With his conviction at the Italian Supreme Court on charges of tax fraud, the days when Silvio Berlusconi kept a stranglehold on Italian politics may finally be coming to an end. But he nevertheless has achieved something no other modern media mogul has managed. Not only is he the dominant player in the Italian television market, he has also been the defining figure in Italian politics for the past decade — for better or worse. As the media writer Michael Wolff observed, the American equivalent would be something like Barry Diller buying Universal, then running for president and winning. It’s an arrangement that is unimaginable in the United States, yet for the past decade Italy has existed under the yoke of Berlusconi politics and Berlusconi media.

With three networks now to his name, Berlusconi essentially created independent television in Italy — and became wildly rich off it. His estimated net worth is now $6.2 billion, and even if his star has dimmed, he remains a dominant force in Italian politics. His conviction by the country’s Supreme Court may carry with it a ban from politics, which could in turn generate enough aftershocks to bring down the government. Even in disgrace, then, Berlusconi retains a fair amount of power in Italian politics, and it is a measure of his ability to firmly enmesh himself in the country’s politics and media that he has bounced back seemingly career-ending setbacks as often as he has. It is a rare mogul-cum-politician who can survive charges of paying prostitutes, tax evasion, and corruption. In the firmament of media moguls today, Berlusconi is unmatched. 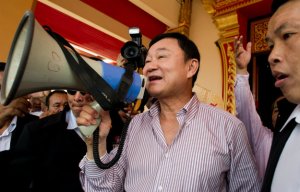 Among the media barons who have successfully made the transition from industry to politics, only Thaksin Shinawatra comes close to the success — and infamy — Berlusconi has garnered. Through a canny — and, some say, corrupt — use of government concessions, Shinawatra built a media empire from scratch that at its height (it’s now owned by a Singaporean holding company, though the family is still a powerhouse) included a majority stake in the country’s only private television network, a significant chunk of its largest mobile phone operator, a 40-percent stake in a major Internet provider, and a 41-percent stake in a satellite communications firm. But his good fortune was not to last. Elected prime minister in 2001, he was thrown out in a coup in 2006 amid charges of corruption and an anti-democratic governing style. Tellingly, his critics in the intelligentsia liked to call him the “Berlusconi of Asia.”

Now, Shinwatra, who is worth about $1.7 billion, has become something of a post-modern prime minister. His sister, Yingluck Shinawatra, currently serves as prime minister, but because of corruption charges Thaksin can’t return to Thailand. Though he holds no formal political office, he’s still reportedly running the country from his private jet as he bounces around the world to his various villas and gold mines. He now governs remotely by phone and instant messenger, his sister serving as the public face of the Shinawatra empire. Yingluck has attempted to downplay the role her brother plays in the country’s affairs, but the mogul is widely acknowledged to be the power behind the throne. “We can contact him at all hours,” Charupong Ruangsuwan, the interior minister and secretary general of Thaksin’s Pheu Thai Party, told the New York Times in January. “The world has changed. It’s a boundless world. It’s not like a hundred years ago when you had to use a telegraph.”

While the Bezos purchase of the Post came as a surprise, there’s a long line of eccentric billionaires who have bought expensive, struggling media properties. Among that crowd, no star shines brighter than that of Rupert Murdoch, the wily Australian media mogul. With the purchase of the Wall Street Journal in 2007, Murdoch achieved a life-long objective: acquiring a newspaper with the gravitas to go head-to-head with the New York Times, a favorite object of Murdoch hatred.

The Bancroft family’s decision to sell the Journal to Murdoch stands as perhaps the clearest analog to the Graham family’s move to put the Post on the chopping block. But the Post is quick to emphasize that this time around is very different. “This isn’t Rupert Murdoch buying The Wall Street Journal, this is somebody who believes in the values that the Post has been prominent in practicing, and so I don’t see any downside,” Bob Woodward, the paper’s superstar reporter, told MSNBC’s Morning Joe. The differences are certainly clear: Bezos, unlike Murdoch, has no history of turning his corporate enterprises into ideological mouthpieces. Many believe the Journal has taken a rightward turn under Murdoch, not just on its editorial pages but also in its news reporting. Little is known about Bezos’s political leanings, but he is thought to be something of a libertarian — the magazine Reason celebrated him as one of their “35 Heroes of Freedom” in 2003.

Even if the Journal remains Murdoch’s flagship publication, it represents but a sliver of his  media empire. News Corp. has annual revenues of about $33 billion, and most of that money comes from its film, cable, and satellite television divisions. Murdoch’s star briefly dimmed in 2011 when his British tabloids were implicated in a wide-ranging scandal involving the hacking of telephone voicemails. That scandal briefly knocked Murdoch on his heels and torpedoed a satellite television deal that would have vastly expanded his empire. He now plans to split his newspaper and publishing holdings, which have been a drag on the overall performance of his company, into separate divisions. This should unlock greater returns on his most profitable units, while protecting his main assets from the liabilities of the print division — which include the legal fallout in Britain from his reporters’ hacking activities.