There's a new jihadist recruiter on the Internet. Based in San Francisco and backed by a multimillion dollar bankroll, the recruiter orchestrates thousands of introductions every day, connecting people at risk of radicalization with extremist clerics and terrorist propagandists -- even facilitating online meetings with hardcore al Qaeda members.

The recruiter is Twitter, and it's shaking up the world of online radicalization in ways both large and small.

Here's how this nefarious operator works. First, you sign up by going to Twitter.com and creating an account, which can even be anonymous. Then you pick someone to follow.

There’s a new jihadist recruiter on the Internet. Based in San Francisco and backed by a multimillion dollar bankroll, the recruiter orchestrates thousands of introductions every day, connecting people at risk of radicalization with extremist clerics and terrorist propagandists — even facilitating online meetings with hardcore al Qaeda members.

The recruiter is Twitter, and it’s shaking up the world of online radicalization in ways both large and small.

Here’s how this nefarious operator works. First, you sign up by going to Twitter.com and creating an account, which can even be anonymous. Then you pick someone to follow.

Let’s say your interest in terrorism was sparked by al Qaeda’s newest affiliate, the Syrian group Jabhat al-Nusra. So you follow their well-publicized Twitter account. That’s when the recruiter makes its move. Once it knows you’re interested, it starts making introductions.

In a trial run, Twitter’s very first recommendation was the official account used by Ansar al-Mujahideen, one of the most important and notorious jihadist message boards. This recommendation is right on target, so you follow Ansar.

In a moment, you’ve gone from a casual interest in Syrian jihad to following a major node in the online infrastructure of terrorism.

This choice instantly prompts a new round of recommendations, which are prominently displayed at the top of your Twitter timeline. 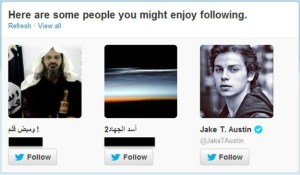 As an Arabic-speaking would-be jihadist, you have no idea who this child actor on the right is supposed to be (one of several default recommendations of accounts with millions of followers), but the other two are extremely prominent online jihadists.

As a newbie, you don’t know all the players, but the guy on the left sure looks promising (his avatar is a picture of al Qaeda in the Arabian Peninsula’s recently deceased deputy leader Said al-Shihri). The second guy’s Twitter handle has “jihad” right in the name, so that’s an easy one.

After you pick your first five accounts to follow, Twitter stops force-feeding you recommendations, but it continues to offer them up in a left-hand column, where you can click for a longer list. Armed with its knowledge of your interest in terrorism, Twitter slowly moves the Lady Gagas and Justin Biebers down the list, while moving hardcore terrorists and extremists higher and higher. 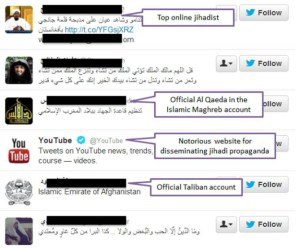 Twitter’s recommendations are the cream of the crop, all the essential accounts a budding terrorist might want to discover. But it’s not just the low-hanging fruit. The more focused your initial follows are, the more specific the recommendations. Further experimentation shows that if you know one honest-to-God terrorist online, Twitter will cheerfully connect you with many others.

And it’s not just jihadists. Following the American Nazi Party serves up an equally compelling menu of white supremacists, anti-Semites, and violent terrorist groups. It doesn’t matter what twisted ideology you’re interested in, Twitter is there to help you get connected. Presumably, the same dynamics are available to assist online gang members and pedophiles.

Twitter was far more effective at identifying and recommending critical paths to violent radicalization within moments of a user signing up. As a terrorist dating service, it’s hard to beat.

It’s unintentional, of course. Twitter’s recommendation feature is designed to find accounts for you to follow that are relevant to your interests. It blindly analyzes people who follow the same accounts that you do, then suggests you follow accounts that those people follow.

But intentional or not, Twitter now offers a 20-minute master’s course in violent extremism online. The implications are staggering — but they aren’t necessarily all bad.

The biggest problem is ease of use. In the past, someone who was interested in a violent ideology had to do research. They might wander onto an online message board or sift through reams of literature, with little clear or objective guidance about which ideologies and ideologues were most relevant to their interests. This process could take a while — days, weeks, or months.

Twitter lets users skip right past that stage to find the sources that are most relevant and most deeply engaged in the ideology. It can get a would-be terrorist up and running in 20 minutes, with access to rich sources of information from social media’s most influential extremists.

It also creates quick paths to meet and interact with terrorists and foreign fighters who are already actively engaged in violence. Most people who take part in violent extremism have personal connections to other extremists, so Twitter’s conversational style meshes well with its highly accurate recommendations.

The system provides a running start for users who are interested in pursuing ideologically motivated violence.

On the flip side, it’s likely that these recommendations make extremist threats look bigger than they are. Twitter will steer someone with a casual interest in extremism toward some of the biggest and most-followed sources, puffing up follower counts with marginal users who aren’t really all that engaged, or those who sample the ideology and later abandon it.

Consider the Twitter account of al Qaeda’s affiliate in Somalia, al-Shabab, which began 2013 with well over 20,000 followers. After the account was terminated in January, the terrorist group came back with a new account under a different name. It currently has just under 6,000 followers, nearly seven months later. More than two-thirds of al-Shabab’s followers were people with only a casual interest, or who lost interest quickly. This suggests we shouldn’t necessarily panic over Jabhat al-Nusra’s 75,000 followers (out of more than half a billion total Twitter subscribers).

Twitter’s recommendation system also offers opportunities for countering violent extremism (CVE). As I wrote in a research paper in March with co-author Bill Strathearn, once you understand the dynamics of online influence, it’s possible to find ways to game the system and put counter-radicalization voices into the mix. It requires significant initiative, imagination, and risk-taking, but if you build the right kind of online presence, you can insert challenges to extremist ideology into the recommendation mix. It’s easier said than done, but it’s not impossible.

There are other ways to exploit this system in service of CVE, but they would require Twitter to take an active role. The company’s past practices suggest it is understandably reluctant to play the role of thought police in charge of manipulating its users’ political inclinations, but if it chose to address this problem, it could be a powerful force.

Twitter recently made a number of concessions and added reporting tools to help address a problem with rampant hate speech, which has flourished in part due to the company’s inconsistent and mostly hands-off approach to user content.

Some accounts flagged by other users may be clearly radical but not overtly violent enough to trigger a termination. In such a case, Twitter could make the flagged account invisible to its recommendations system.

Of course, Twitter could also insert anti-violence alternatives in recommendations for those who follow a flagged account, but that’s too complicated and creepy to work over time. No one elected Twitter, and few would be comfortable seeing it as a broad arbiter of good and evil. If the company agreed to minimize its complicity in spreading violent ideologies, that’s probably as much as we could hope for.

There is a potential silver lining that emerges organically from Twitter’s role in recommending relevant accounts to users: democracy, of a sort.

In the “old” days, post-Internet but pre-Twitter, from the early to the late 2000s, jihadism functioned largely as a top-down enterprise. The movement was tightly controlled first by organizations and later by the administrators of message boards such as Ansar al-Mujahideen and al-Shamikh, who were in turn beholden to al Qaeda proper.

By design, these controls stifled the free exchange of ideas. Jihadis lived in a petri dish, and if a user didn’t know his place, he found himself on the outside looking in.

Social media is changing that dynamic at a startling pace. Because relationships are free-form and unconstrained, jihadists are seeing a substantial increase in dissent, and because there are no administrators who can restrict relationships on Twitter, that dissent will invariably manifest itself on the list of recommendations.

For example, a user who follows the pro-Shabab Muslim Youth Center on Twitter immediately receives a recommendation to follow Omar Hammami, the American jihadist dissenter in Somalia whose tweets about al-Shabab corruption resulted in the slaughter of a significant portion of Shabab’s senior leadership.

Despite rapid growth, we’re still in the early stages of the jihadist migration to social media, which has been sparked in part by frequent outages and technical challenges on the old-school message boards, as well as disputes among prominent online and offline personalities. But the rise of public dissent and the fast pace of Twitter are likely to spark new strains of thought and create new fractures in traditional party lines.

In Twitter’s free market of ideas, dissenters will face Darwinian pressures and opportunities. Ideas and personalities that are strong enough to compete will win followers, and eventually Twitter’s recommendations will start to favor the strong.

It’s possible that more virulent strains of extremism will emerge and seize the high ground. But there also exists a small but emerging group of online thinkers who share jihadist political sympathies but lack blind enthusiasm for randomly targeting civilians.

These users — who have the luxury to tweet without dodging drone strikes — could shift the recommendations toward the “center” and shape the direction of the wider movement.

If that sounds like a long shot, it is.

In the short term, the actual negatives of Twitter’s all-too-apt recommendations almost certainly outweigh any potential positives. Social media has opened the door to a new kind of evolution and we can’t predict its ultimate direction. But the tradeoff clearly means making extremist ideologies more accessible than ever before.

And in the world of counterterrorism, “sit back and watch” is rarely a saleable policy prescription, even when it has merit. Twitter is likely to face growing pressure over the robust tools it provides to aspiring extremists.

In the past, the company has made a stand in favor of free speech and the airing of unpopular political views on its service. But it’s a lot harder to defend its practice of proactively spoon-feeding encouragement to potentially violent users.

NEW FOR SUBSCRIBERS: Want to read more on this topic or region? Click + to receive email alerts when new stories are published on Economics, Science and Technology