The World’s Most Powerful Labor Unions

From Tunisia to South Africa, where workers still rule. 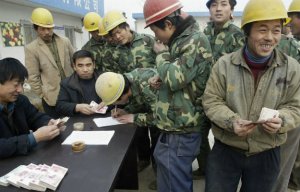 This Labor Day, America’s labor leaders find themselves in an unenviable position, with union membership plummeting to a 97-year low in 2012. Greater labor mobility, the flight of manufacturing jobs from the United States, and new state laws restricting the power of unions, among other factors, have combined to make the country’s labor movement a shadow of its former self. While recent actions such as coordinated strikes by fast-food workers have some analysts talking about labor staging a comeback, the numbers tell a different story.

Elsewhere in the world, however, organized labor has managed to retain at least some of its clout. Here’s a tour of some of the world’s most powerful — though often embattled and controversial — labor unions.

Until it encountered the All-China Federation of Trade Unions, Walmart had a nearly unbroken record of killing worker unionization efforts. By 2006, however, Walmart gave in and permitted unions at all of its Chinese branches, which totaled 66 outlets (the big-box behemoth now has approximately 390 outlets in the country). With over 200 million members, the ACFTU is the world’s largest labor group, and its showdown with Walmart marked a watershed moment in the Chinese government’s relationship with foreign investors.

But the power of the ACFTU is in large part derived from the might of the Chinese state; it is, after all, state-controlled. As a result, the union has been dogged by allegations that it is little more than a government tool for controlling the country’s sizeable working class. Rather than advocating on behalf of its workers, ACFTU often strives for harmony between workers and their employers — a philosophy that typically leads to the squashing of workers’ demands in order to maintain the business-friendly labor rules that have helped propel Chinese economic growth over the last few decades. Indeed, signs of labor discontent in China are rife. In 2010, for example, 1,700 workers at a Honda factory launched a strike for higher wages and built a labor group outside the confines of the state-sanctioned ACFTU — a move that was not looked upon kindly by China’s leaders. “The trade union is not representing our views; we want our own union that will represent us,” one striking worker told the New York Times. Other instances include a 700-strong strike at an electronics factory in Shenzhen in 2012 and a rash of strikes in 2011 that hit furniture, clothing, and electronics factories. It’s a movement that, China Labor Watch’s Han Dongfang observed, may force ACFTU “to re?examine its role and look for ways to become an organization that really does represent workers’ interests.” 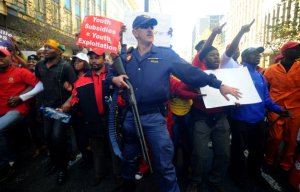 When South Africa’s leaders began dismantling apartheid in 1990, the Congress of South African Trade Unions emerged in a dominant position. A leading group in the anti-apartheid movement, COSATU entered into what is known as the Tripartite Alliance — a grouping that included the African National Congress and the South African Communist Party, and long maintained a stranglehold on the country’s politics. South Africa’s current president, Jacob Zuma, was elected in large part based on his continuing alliance with COSATU, which had grown furious at the free-market policies of his predecessor, Thabo Mbeki.

But COSATU has struggled to keep Zuma in its pocket, and in 2010 tensions between the president and labor groups erupted in the form of a public sector strike. Zwelinzima Vavi — the general secretary of COSATU, who is currently suspended from his role amid a sex scandal — denounced the Zuma government for leading South Africa “rapidly in the direction of a full-blown predator state, in which a powerful, corrupt and demagogic elite of political hyenas increasingly controls the state as a vehicle for accumulation.”

These tensions have endangered the Tripartite Alliance, but COSATU remains a force to be reckoned with in South African politics. South Africa’s gold miners are going on strike this week — an effort fully backed by COSATU that threatens a key sector of the South African economy. Mine workers are demanding a pay raise of up to 60 percent, and their decision to strike comes as many of the country’s car, construction, and aviation workers have also put down their tools and joined the picket lines. In 2012, COSATU put tens of thousands of workers on the streets as part of a national strike. 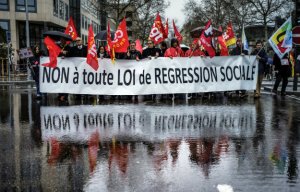 Union membership in France has now dipped below 10 percent (union membership in the U.S. fell to 11.3 percent in 2012), yet French labor groups have somehow managed to retain an enormous amount of power. One reason why is the General Confederation of Labor, known by its French initials, CGT. With loose communist ties, the country’s second-largest union is the radical specter on the far left of French politics that fans the flames of union discontent. Where other unions have moved to make compromises with the government, the CGT has refused, instead staging a series of spectacular, gutsy protests. Most recently, its members at the Eiffel Tower in Paris walked off the job because a malfunctioning elevator that had gone unfixed made working conditions unacceptable, according to the union.

In François Hollande, the CGT now has a Socialist president and labor ally in office. But that doesn’t meant the group has been less aggressive. In October 2012 — just five months after Hollande’s election — the CGT brought tens of thousands into the streets to protest the president’s commitment to the European Union’s deficit-slashing fiscal pact, an agreement that could threaten French social programs. “This is a government that was elected largely thanks to votes of workers,” Pascal Debay, the head of the CGT, said in an interview at the time. “We’re witnessing the destruction of jobs and the wrecking of French industry. That’s why we’re mobilizing. The choices the government makes in coming weeks will be followed very closely.” In May, a group of French unions moved to strike deals with major companies that guaranteed plants would stay open in exchange for changes to France’s famously sclerotic labor regulations, but the CGT largely refused to compromise. While reform to French labor markets may be inevitable — just about everyone who isn’t the CGT appears to be seeking changes — the union’s size and steadfast commitment to left-wing labor politics make it a powerful counterweight to both the government and other unions. Perhaps more importantly, in a country enamored with its revolutionary past, the CGT — even amid dwindling unionization rates — knows how to stage a protest that will win over French public opinion. 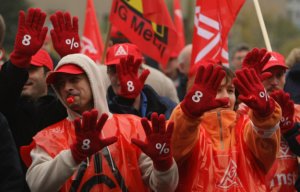 Germany is often looked to as a potential model for how to restructure France’s byzantine labor laws. In 2003, the country embarked on a labor reform known as Agenda 2010 that moved its labor laws in the direction of America’s. The new system made it easier for employers to hire and fire employees, increased temporary jobs, and drastically cut what at the time were extremely generous unemployment benefits. These are all overhauls that France’s unions would sneer at, but they haven’t sidelined organized labor in Germany.

IG Metall is Germany’s largest union, and the influence it wields is breathtaking. In February, with the European economy still stagnating, the metalworkers’ union requested a 5.5-percent annual pay increase for its members, settling for a staggered deal that amounted to a 5.6-percent raise over 20 months. The previous year, the union asked for a 6.5-percent hike and ended up reaching a deal for just under 4 percent. But the measure of IG Metall’s influence lies not so much in its ability to guarantee pay increases for its members in the midst of an economic crisis — though that is certainly impressive. By virtue of its leading role in the constellation of German labor groups, agreements reached by IG Metall often serve as a benchmark for other industries. As a result, when IG Metall sits down at the negotiating table, it speaks not just for its own members but also for a large swath of the German workforce. 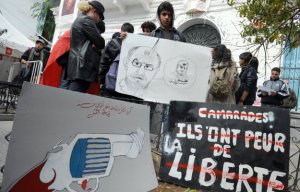 With Tunisia embroiled in a political crisis over the future of its Islamist-controlled government, the Tunisian General Labor Union has emerged as a key power broker in the country’s post-Arab Spring era. A string of assassinations of secular Tunisian politicians has provoked a public outcry against the ruling Ennahda party, which, from its seat in Tunis, has struggled to implement economic and political reforms. As the crisis has come to a head, the UGTT has mediated talks between the opposition and the government, backing a demand to dissolve the government (in mobilizing protests, the union was a key player in precipitating the crisis in the first place). The situation bears some resemblance to the conflict in Egypt between Islamist and secular groups, but in Tunisia, the UGTT — and not the military — serves as the critical go-between for the warring factions. Still, that’s a comparison the UGTT is loathe to embrace. “Our situation is different from Egypt’s and I’m not another al-Sisi,” Hussein Abassi, the union’s secretary general, told Reuters last month.

So far, the UGTT’s plan seems to be coming up roses. Ennahda has now embraced the negotiations, though it is attempting to settle plans for the constitution and an electoral law before giving up power. That decision represents a major win for the UGTT’s leaders — after all, they were the ones who proposed the plan.