Why none of the plans for intervening in Syria actually tries to save civilians.

During his opening statement before last week’s House Armed Services Committee hearing on Syria, ranking member Rep. Adam Smith described the “civil war in which Assad has killed somewhere in the neighborhood of a hundred thousand of his own civilians.” Versions of Smith’s misleading characterization are repeated often by policymakers. As Sen. John McCain has often proclaimed, and repeated last week, “The fact is Bashar Assad has massacred 100,000 people.”

That the security forces under Assad’s authority have perpetrated war crimes and crimes against humanity, including the use of chemical weapons, is beyond doubt. And as the head of state, he has effective control over his subordinate forces and must be held accountable before the International Criminal Court or a post-conflict special tribunal for Syria. However, most of the reported deaths in Syria have not been committed by those forces under his command.

The most widely quoted source for civil war deaths has been produced by the Syrian Observatory for Human Rights (SOHR), which consists of a handful of Syrian activists compiling information in a war zone and presenting the best estimates possible. Despite their potential for bias and the methodological challenges of tracking the Syria war, SOHR estimates are consistent with the latest United Nations numbers. In the past 10 days, both the U.N. under-secretary-general for humanitarian affairs, Valerie Amos, and the high commissioner for human rights, Navi Pillay, estimated that “more than 100,000” Syrians have lost their lives in the ongoing civil war.

This is how SOHR breaks down the Syrian deaths: 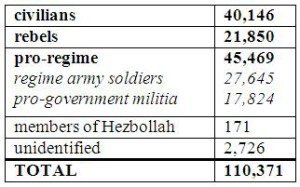 This grim account is not the Syrian civil war that U.S. policymakers and pundits reference when proposing and debating military intervention options. You will not hear senators assert that Syrian rebels have “massacred” over 45,000 Syrian regime or paramilitary forces. When Assad responded to the largely peaceful demonstrations in 2011 with brutality and extrajudicial detentions, Syrian rebels took up arms against the state. Their primary objectives are to capture and control additional territory and resources and, ultimately, to assure that Assad is removed from power, whether through diplomacy or warfare.

Saving civilians’ lives, as opposed to those of regime security forces or members of the armed opposition, requires recognizing exactly how non-combatants are being killed. On this, the 11 reports and updates published by the Independent International Commission of Inquiry on the Syrian Arab Republic have proven to be the most reliable resource. After re-reading these gripping and detailed findings this weekend, I found that a half-dozen means of regime-directed lethality against civilians appear consistently:

The U.N. mission report released on Monday investigated allegations of chemical weapons use in the Ghouta area of Damascus on August 21 and determined that they were used “against civilians, including children, on a relatively large scale,” with “clear and convincing evidence that surface-to-surface rockets containing the nerve agent were used.” This impartial finding directly implicates the Assad regime, though as journalist Liz Sly recently noted, less than 1 percent of all Syrian deaths have been by chemical weapons.

Fully comprehending these six primary means of regime-directed lethality against Syrian non-combatants — as well as the recent large-scale use of chemical weapons — should inform various demands in the United States for military intervention. But in the last two-and-a-half years, virtually no proposal for using force to protect civilians in Syria has taken into account how non-combatants are actually killed and injured.

This omission is not by accident. There are well-known and time-tested defensive countermeasures that the U.S. military could implement in Syria tomorrow to protect civilians there. You can find the tactics, techniques, and procedures for countering and defeating every way that Syrian civilians are being killed in the U.S. military’s joint publications and the U.S. Army’s field manuals. If you want these broken down into excruciating detail, the Pentagon also produces a 1,300-page universal joint task list. And for a more readable description of how military planners think about developing contingency operations to save lives, you can read the handbook produced by the Mass Atrocity Response Operations (MARO) Project. (Disclosure: I was a research associate for the MARO Project for nine months in its early stages.)

For example, mitigating or suppressing sniper fire requires well-trained infantry troops to detect, seize, search, and clear each floor the gunman is suspected of occupying. Counter-sniper tactics also include deploying your own snipers to painstakingly determine the patterns and location of an adversary sniper. As an Army field manual instructs: “The sniper must place himself in the position of the enemy and ask, ‘How would I accomplish this mission?’.” Once found, the sniper is targeted by another sniper. (The 2001 Jude Law film Enemy at the Gates was supposedly a realistic representation of such tactics, as used by German and Russian snipers during the siege of Stalingrad.)

If you want to disrupt mobile artillery shelling, you need advanced counter-battery radars synched with counter-battery fire, or else lots of manned or unmanned intelligence, surveillance, and reconnaissance assets circling overhead to identify the fire source in real time (which Syrian rebels do not possess). Or, you can always “send in the infantry,” assuming they are trained in the basic fire and movement tactics required to locate and attack self-propelled artillery.

The reason these specific countermeasures are never proposed is that they entail a level of cost, commitment, and risk that neither pundits nor policymakers are willing to accept, including the unmentionable “boots on the ground.” Rather, intervention proposals focus on using stand-off weapons against largely static “regime targets” in an effort to coerce Assad to change his behavior, or enforcing (or just announcing) a no-fly-zone, which would be largely irrelevant. As President Obama stated in June: “The fact of the matter is for example, 90 percent of the deaths that have taken place haven’t been because of air strikes by the Syrian air force.”

The types of interventions that proponents have endorsed for Syria are often based on deep misunderstandings of how U.S. force was used on behalf of humanitarian missions in the past, and have almost nothing to do with how Syrian non-combatants are actually being killed. As someone who has been researching and writing for a decade about how military force can be used to save lives, I find the unwillingness to confront the realities of the conflict in Syria puzzling and disheartening. Either saving Syrian non-combatants from a violent death is so important to the United States and the international community that it necessitates an effective military response, or it isn’t. Intervention proposals that consciously ignore or downplay the amount and type of force needed to protect civilians are just wishful thinking.