Blood on the Constitution

America will never solve its gun problem until it gets over its fetish for the Founding Fathers.

Here we go again. With 12 dead bodies at Washington's Navy Yard, not including that of the shooter, Americans are back to the usual handwringing: Why, oh why can't we stem the tide of gun violence?

People, this is not rocket science. (Yes, I'm mad).

For a start, we have too many guns sloshing around. A recent Council on Foreign Relations (CFR) backgrounder notes that "The United States, with less than 5 percent of the world's population, has about 35-50 percent of the world's civilian-owned guns." Reading the news, you might imagine that Syria, Iraq, Afghanistan, the Democratic Republic of the Congo, or some other conflict-ravaged nation would be leading the most guns-per-capita race, but nope: That's us. We're number one.

Here we go again. With 12 dead bodies at Washington’s Navy Yard, not including that of the shooter, Americans are back to the usual handwringing: Why, oh why can’t we stem the tide of gun violence?

People, this is not rocket science. (Yes, I’m mad).

For a start, we have too many guns sloshing around. A recent Council on Foreign Relations (CFR) backgrounder notes that “The United States, with less than 5 percent of the world’s population, has about 35-50 percent of the world’s civilian-owned guns.” Reading the news, you might imagine that Syria, Iraq, Afghanistan, the Democratic Republic of the Congo, or some other conflict-ravaged nation would be leading the most guns-per-capita race, but nope: That’s us. We’re number one.

Yes, you say, but guns don’t kill people, people do. Well, bless your shrunken little NRA heart, that’s true! Last I checked, guns just lying around all by themselves don’t spontaneously start shooting at elementary-school children or random passersby. With rare exceptions (“I dropped it on the floor and it just went off…”), it takes a finger on the trigger to get them going.

But while guns don’t kill people on their own, they sure make it easier for people to kill people. This, incidentally, is why our troops carry guns, instead of slingshots or brass knuckles: If you need to be able to kill quickly and surely, guns will do the trick.

How likely are you, though, an ordinary citizen, to have a need to kill quickly and surely — keeping in mind that a gun kept in the home is 12 times more likely to kill a family member or guest than an intruder? Correlation is not causation, but here are two charts (courtesy of CFR) that tell you pretty much all you need to know, unless you’re a believer in really, really big coincidences:

If you don’t like those charts, here’s another, comparing U.S. troop deaths in Iraq and Afghanistan and U.S. deaths due to global terrorism to firearm homicides among U.S. children and youths: 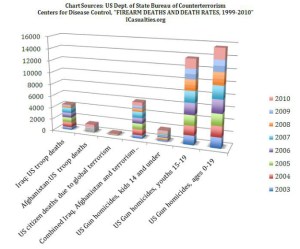 To spell things out, since 2003, America has lost more than twice as many kids 19 and under to firearm homicides than it has lost soldiers and citizens to two wars and global terrorism combined. (I was going to add a column for non-homicide gun deaths involving kids, and another for all gun deaths across all age groups of the U.S. population, but the columns would literally have been off the chart — between 2003 and the end of 2010, 7,027 Americans died in Iraq and Afghanistan and from terrorist attacks, while 35 times as many Americans, or 247,131, were killed by guns in the United States.)

Solid data are not yet available for the years after 2010, but if recent trends have continued, U.S. firearm deaths since March 2011 will come within spitting distance of the number of deaths caused by Syria’s bloody civil war.

Moral of the story for all you national security types out there? If you’re concerned about saving American lives, gun control would be a good place to start.

Americans currently have crappy gun-control laws, “crappy” being the technical legal term for “hopelessly, pathetically inadequate,” especially when compared to other countries‘ laws. Yes, those countries with fewer guns and fewer gun deaths — they have much tougher gun-control laws than the United States does.

Ah, now we’re getting to the real culprit. Why, oh why are so many Americans killed by guns? In the end, I blame the U.S. Constitution and our weird quasi-religious worship of that antiquated text.

For its time, the U.S. Constitution was a pretty impressive document, if you leave aside certain small details such as slavery, which was considered A-OK by the Founding Fathers, and women’s rights, which were considered not A-OK. But let’s give the Constitution’s authors a break; they lived at a time when slavery was widespread not only in the United States but around the globe and women were still considered semi-chattel in most of the world. For its time, the Constitution was not bad at all.

But for our time, it stinks.

Frankly, having the world’s oldest written constitution is not something to be proud of. As my Georgetown colleague Mike Seidman wrote in a 2012 New York Times op-ed,

Our obsession with the Constitution has saddled us with a dysfunctional political system, kept us from debating the merits of divisive issues and inflamed our public discourse. Instead of arguing about what is to be done, we argue about what James Madison might have wanted done 225 years ago.

As someone who has taught constitutional law for almost 40 years, I am ashamed it took me so long to see how bizarre all this is. Imagine that after careful study a government official — say, the president or one of the party leaders in Congress — reaches a considered judgment that a particular course of action is best for the country. Suddenly, someone bursts into the room with new information: a group of white propertied men who have been dead for two centuries, knew nothing of our present situation, acted illegally under existing law and thought it was fine to own slaves might have disagreed with this course of action. Is it even remotely rational that the official should change his or her mind because of this divination?

The word “divination” is appropriate, because much of what passes for constitutional debate in this country has more in common with theology than law. Americans spend an inordinate amount of time arguing about how best to interpret the Second Amendment, but the real question — the one we should be asking — is this: Why are we so fixated on a 226-year-old piece of paper?

Political theory has advanced a good deal since 1787. We now have decent social science research on the pros and cons of different voting systems and different judicial systems; we can now measure and evaluate the impact of different political and legal regimes in ways the framers could not. Most other nations have had reason to develop new constitutions over the last two centuries, for the simple reason that structures and rules that once made sense often make far less sense when circumstances change.

And boy, have circumstances changed lately. To return to gun deaths, the framers could never have imagined weapons technologies like those used in Newtown or the Navy Yard. But because the U.S. Constitution is amazingly difficult to amend (incredibly, women still have no text-based constitutional guarantee of equal rights), Americans are stuck with gun rules from more than two centuries ago.

This may help explain why the U.S. Constitution no longer gets much global respect. Just a few decades ago, the overwhelming majority of nations around the globe modeled their own constitutions on it. Today, that’s no longer true. As a recent study by David Law of Washington University in St. Louis and Mila Versteeg of the University of Virginia found:

Just why other democracies are losing interest in the U.S. Constitution as a model is an interesting question, and there are undoubtedly a thousand and one reasons. But I’ll bet the Navy Yard shootings just added 12 more.

Rosa Brooks is a law professor at Georgetown University and a senior fellow with the New America/Arizona State University Future of War Project. She served as a counselor to the U.S. defense undersecretary for policy from 2009 to 2011 and previously served as a senior advisor at the U.S. State Department. Her most recent book is How Everything Became War and the Military Became Everything.

Has the nature of "war" changed since the days of Clausewitz?

What if America's incarcerated population really was a nation?