It depends on which India you're talking about.

Just a few years ago, it seemed the sky was the limit for India. Its budding high-tech industries were supplying software and services to countries around the world, its call centers were ubiquitous at the end of English-speakers’ phone lines, and its pharmaceuticals industry was pumping out low-cost cures for hundreds of millions of customers in emerging economies. Now, skepticism about India’s growth abounds. Is it justified?

India certainly doesn’t lack potential. As I’ve written before, the main ways for a country to raise living standards are to put more capital within the reach of its workers and to adopt new technologies from abroad. India has room to do much more of both.

One way to bring workers and capital together is urbanization, which tends to track economic growth fairly closely. The graph below shows the strong relationship between urbanization and per capita incomes. Each point represents a country, and the green one is India. It’s right on trend, and it has a good long way to go. 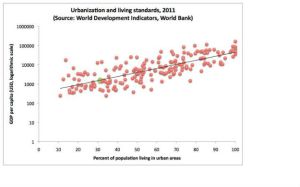 Other populous countries have trodden India’s path already. Indonesia was at a similar point in the early 1990s, as was China in the late 1990s. Both continued to urbanize, with about 50 percent of their populations living in cities today. But China’s per capita income is higher, and it also urbanized more quickly. There’s room for plenty of variance around the trend line, so India’s future is far from certain.

What slowed India down? After all, it was a capitalist democracy that had the good fortune to be a British (rather than a French or Belgian) colony, and British colonies have tended to do better than their counterparts during globalization. What about India was so retrograde that a supposedly communist country that was more corrupt and only joined the World Trade Organization in 2007 could perform better during the peak era of globalization?

One answer is that India lagged in human development. People need health care, education, access to opportunities, and a raft of other intangibles to realize their full potential in society and the economy. For the majority of Indians, these pillars of human development were and are still far below par.

According to the United Nations Development Program’s most recent measure, India ranks 136th in the world for human development, with Vietnam 127th. When the figures are adjusted for inequality, India sits 21 places behind Vietnam. To understand why, consider that life expectancy in India was about 66 years in 2012, while in Vietnam it was over 75. Children in India can also expect a year less schooling than their Vietnamese counterparts.

Even though India’s GDP per capita is similar to Vietnam’s in dollar terms, the money is not making it down to the grassroots. A few elites pulling in hundreds of millions of dollars every year can boost average incomes, but their children still count as only one person each for life expectancy and schooling. By the same token, an urbanized population living in slums without decent shelter or basic services isn’t necessarily a productive one. These disjoints may be at the heart of India’s underperformance.

Nevertheless, there is one enormous caveat in any discussion of India’s economic prospects: There are many Indias. India is made up of 35 states and territories that vary enormously along all of the axes I’ve mentioned so far. Generalizations about India make about as much sense as generalizations about Africa.

For example, consider India’s much bemoaned corruption. In 2010, a survey by CMS India, an independent watchdog, found vast differences between Indian states in the likelihood that people would be asked for a bribe. In Andhra Pradesh, an eastern state of almost 85 million people, only 7.4 percent of respondents reported being asked for a bribe by a public official or civil servant. That’s not a bad market for investment — a relatively clean place that would rank among the top 20 countries in the world by population. By contrast, more than half the respondents in neighboring Chhattisgarh said they had been asked for a bribe, and more than three-quarters of them said they had paid.

The variation extends to human development, too. Life expectancy in Kerala, a state of 34 million people, was 74 years in 2010, but in Madhya Pradesh it was only 58. This is a stunning difference, equivalent to the gap between Romania — a member of the European Union! — and Djibouti.

Of course, there is a limit to these differences. State governments have little say in the regulation of foreign investment, capital controls, openness to trade, and competition. But to echo the Indian saying “yahan kuch nahi ho sakta” (essentially, “nothing works here”) is to take a very narrow view of an enormous and complex country. Some things are clearly working in some parts of India, and those parts are sure to grow. The question is whether they will carry the other parts of India with them.

This Time, Russia Is in Afghanistan to Win