Imagining a presentation full of Benjamin Netanyahu's strangest metaphors for the menace posed by Tehran.

Israeli Prime Minister Benjamin Netanyahu might have spent his college days in Cambridge, Mass. burning through tracing paper and graphite pencils, but the architecture — and later business — student almost certainly longed to take up the pen. For proof of Bibi’s secret literary ambitions, look no further than his inspired use of allegory; not since Winston Churchill has a world leader so completely crushed the art of metaphor. From lambs and lions to nuclear ducks to insatiable crocodiles of militant Islam, the Israeli prime minister has yet to meet an animal-threat combination that he could resist reading into the public record.

But if Netanyahu has always been good for a mixed metaphor or two, the recent charm offensive between President Barack Obama and his Iranian counterpart has kicked the Israeli leader’s rhetorical zeal up a notch. In an epic speech at the U.N. General Assembly this week, he likened Iranian President Hasan Rouhani to a “wolf in sheep’s clothing” (Ahmadinejad, he noted “was a wolf in wolf’s clothing”) and accused him of thinking he can “have his yellowcake and eat it, too.” In a series of colorful interviews in recent days, Bibi has been in similarly rare form, at one point toting a prop (Rouhani’s book; “He’s an open book”) to an interview with NPR’s Steve Inskeep. Yes, he brought a visual prop to a radio broadcast.

The whole thing got us thinking about another time Bibi used a visual aid to drive home a point — his unforgettable 2012 speech at the U.N. General Assembly, when he held up a cartoon rendering of a nuclear bomb and ceremoniously staked out Israel’s red line on the Iranian nuclear program. What if, we thought, there were other posters that didn’t make it into the final speech? What if Bibi illustrated all of his metaphors? See below for that amazing thought experiment. 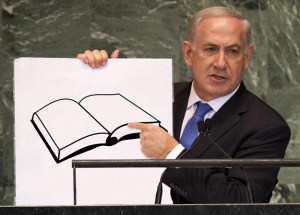 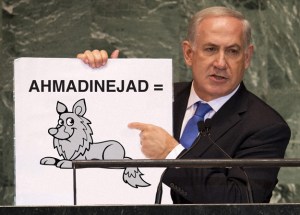 “Rouhani is a wolf in sheep’s clothing. A wolf who thinks he can pull the wool over the eyes of the international community.” Oct. 1, 2013 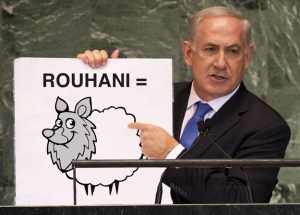 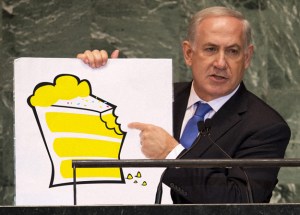 “You know, they’re in the last 20 yards, and you can’t let them cross that goal line…. You can’t let them score a touchdown, because that would have unbelievable consequences, grievous consequences for the peace and security of us all, of the world really.” Sept. 16, 2012 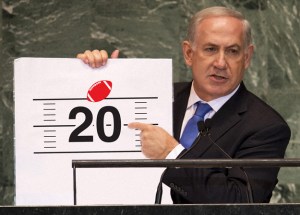 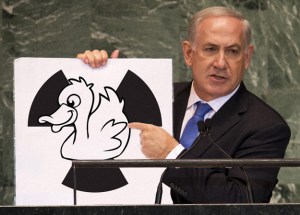 “[Israel’s critics] praise those who unwittingly feed the insatiable crocodile of militant Islam as bold statesmen. They cast as enemies of peace those of us who insist that we must first erect a sturdy barrier to keep the crocodile out, or at the very least jam an iron bar between its gaping jaws.” Sept. 24, 2011 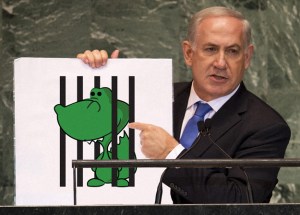 “As far as a nuclear weapons-free zone, you know, when the lion lies down with the lamb, and you don’t need a new lamb every day to satisfy the lion, then we might have this kind of transformation in the Middle East.” July 11, 2010 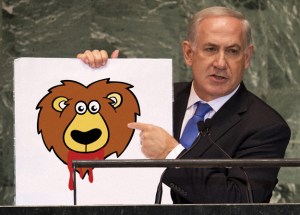