King Snowden and the Fall of Wikileaks

The whistleblower refugee has dominated the media -- and displaced Julian Assange.

In 2013, Edward Snowden shone a spotlight into the darkest corners of American foreign policy, dealing a cataclysmic shock to the country’s intelligence-gathering apparatus as its most clandestine methods and programs were splashed across front pages worldwide. Whether one reviles or reveres him, Snowden’s disclosures were inarguably one of the biggest stories of the year, profoundly reshaping America’s image and relations with friend and foe alike.

The impact of Snowden’s revelations can be seen in the Global Conversation visualization I did for FP’s December issue, which shows that he occupied a role in 2013’s global news media coverage just slightly less important than President Barack Obama himself. In recognition of this impact, FP featured him first in its annual list of leading Global Thinkers, which prompted Wikileaks to both criticize the selection and blast FP’s decision not to include the group’s founder, Julian Assange.

Snowden’s rise to global prominence was once viewed as Assange’s path back into the spotlight, particularly as Wikileaks had helped him escape to Russia. Wikileaks’ assistance was likely intended to tie their respective “brands” together and revive its global profile, making Snowden part of the stable of Wikileaks contributors. But that does not seem to have happened, and the Global Thinkers list is hardly the only data point.

Looking at Google Search Trends, we can see that Snowden has largely displaced Assange in the public interest, peaking over the course of two-and-a-half months this summer before settling into a steady state of popularity the last four months. By contrast, Assange only enjoyed a month-and-a-half of super-fame in 2011 and has largely faded from view (Benedict Cumberbatch biopic notwithstanding). Wikileaks itself has fared even worse, nearly vanishing from the global consciousness since Cablegate. 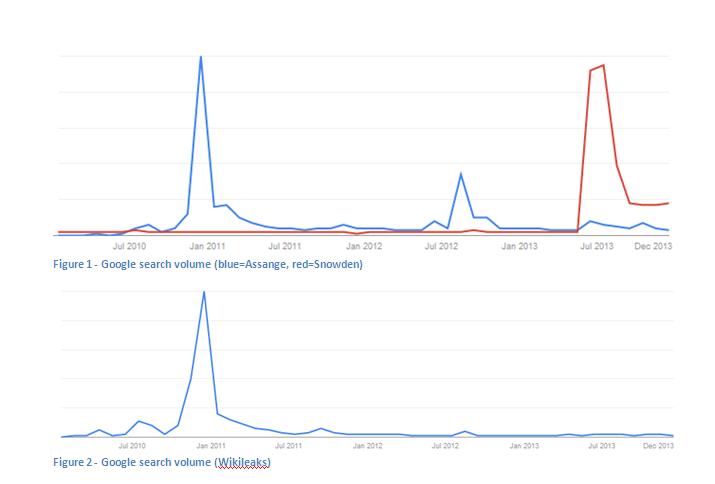 These timelines reflect global search patterns, yet they raise the critical question of what is driving Snowden’s sustained attention and the fall of interest in Wikileaks.

It is true that, although the Cablegate disclosures embarrassed the United States, the classification level and sensitivity of the material Snowden downloaded and its details about the country’s most critical intelligence-gathering efforts have captivated the global imagination. Like a serialized Tom Clancy novel, the steady trickle of new blockbusters has provided an eager public with an unprecedented “behind the scenes” view of the real world of spying.

But most of the world knows of Snowden, Assange, and Wikileaks through what they learn from the news media, and thus the evolving news portrayal of the three has a substantial impact on their respective public profiles. Has global media coverage of government leaks really recentralized around Snowden so much that it is now marginalizing Wikileaks and Assange?

In the diagram below, I have analyzed every global English-language news article monitored by the GDELT Global Knowledge Graph — a massive compilation of the world’s people, organizations, locations, themes, emotions, and events — to identify all people mentioned in articles referencing Edward Snowden, Bradley Manning, Julian Assange, the National Security Agency, or Wikileaks. I then compiled a list of every person mentioned in each article and connected all names mentioned in the same article. I kept only names appearing more than 5 times, yielding a final network of 1,007 names with 4,909 connections among them.

This network diagram was then visualized using a technique that groups individuals who are more closely connected with each other, placing them closer to each other in the diagram, while placing individuals with fewer connections farther apart. Then, using an approach known as “community finding,” clusters of people who are more closely connected with each other than with the rest of the network were drawn in the same color. The specific color assigned to each group is not meaningful, only that people drawn in the same color are more closely connected to one another. Together, these two approaches instantly clarify the macro-level structure of the network, teasing apart the clusters and connections among the newsmakers.

Edward Snowden can be seen as the central hub from which the rest of the network emanates, reflecting his central role in coverage of the last seven months. To his upper right in red is Barack Obama, while to his upper left in blue is Vladimir Putin. Red nodes largely reflect the U.S. side of the disclosures and their impact on U.S. interests, while blue primarily captures the Russian side. To Snowden’s lower left in green is Julian Assange, with Bradley Manning in turn below him, also in green. This green cluster largely contains Wikileaks-specific names. The group of pink names at the bottom of the network are largely former administration officials and previous high-profile whistleblowers, while the light blue names at the top of the network are the reporters who have covered the NSA and Wikileaks stories the most extensively during this period. (An interactive version of this network is available here.) 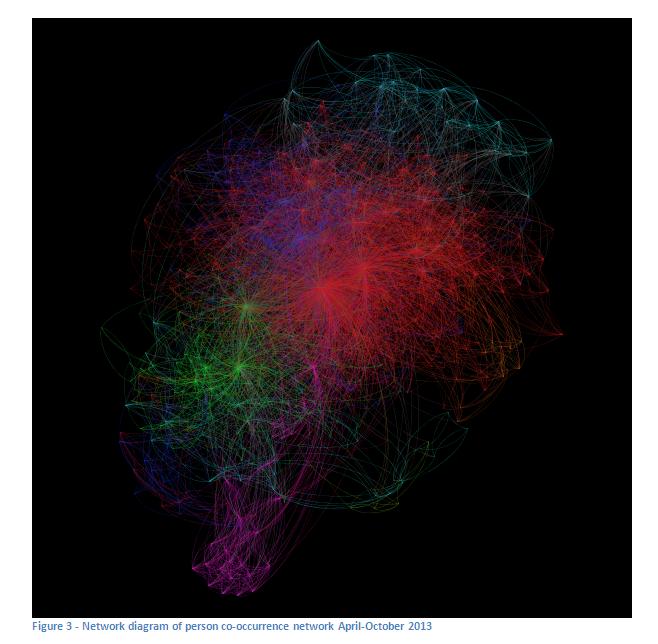 The structure of this network is quite fascinating in the clear segmentation between the world of Snowden; that of Manning, Assange, and Wikileaks; and that of previous whistleblowers. Russia’s relatively light integration with the Snowden cluster shows that, while it provides him sanctuary, it has been highly successful at distancing itself from his disclosures, reaping the public relations bonanza of skewering the United States, while managing to avoid credit for enabling those disclosures. Most striking, however, is the small size and marginal role of the Wikileaks cluster and the way in which previous leakers are largely connected through this shrinking cluster, while reporters are nearly exclusively linked through the Snowden cluster. Snowden is largely displacing his predecessors, pushing them into an ever-more-marginal role.

It seems that Edward Snowden’s path has diverged from that of Wikileaks and its founder Julian Assange in more than just their physical lives. As Snowden walks freely while Assange languishes under virtual house arrest, the whistleblower refugee that Wikileaks helped crown prince has become king of the news media while Assange and Wikileaks fall from the public eye.