Political and piecemeal Pentagon budget cuts can't hide the fact that there's no strategy behind the sequester drawdown.

Beyond the emotional and tragic tale of Army Ranger Cory Remsburg, President Barack Obama’s State of the Union address didn’t say much about defense, beyond an anodyne phrase: “And as we reform our defense budget, we have to keep faith with our men and women in uniform and invest in the capabilities they need to succeed in future missions.” It has been clear that defense budgets have been going down for more than three years now, so why underline the obvious? Because it’s unclear that the Pentagon has the message, or the defense industry, or Congress. The United States still doesn’t have a defense plan that is strategically driven. And it has a super-human effort to avoid the inevitable by all players in the budget game — the Pentagon, Congress, and the defense industry. No wonder they didn’t get the memo yet.

What the country has, instead, is the same kind of defense drawdown we have seen before — cuts that are spread around in lumpy bits and pieces. First, Washington cut projected dollars to buy hardware in the procurement budget, which always falls faster than the overall budget in a drawdown. But this happens piecemeal: The services try to take out things they don’t want, and Congress puts some of them back in. Then, to balance the books, both the Defense Department and Congress slash and burn when it comes to the smaller stuff nobody sees and few lobby for, like trucks and ammo.

Next, the Pentagon goes after the size of the force — first Gen. Ray Odierno, chief of staff of the Army, said the nation could not be defended with fewer than 490,000 in the Army. Then he said it was not secure with an Army smaller than 450,000. Then he got the memo, and he appears to have agreed that it will be 420,000 by the end of this decade. Did strategy drive this? Not a bit; budgets did. Which, of course, sets off a small war between the Army and the Marine Corps — as it does every time — over which is America’s real ground force.

Meanwhile, the Pentagon and military service bureaucracies — uniformed, civilian, and contractor — continue to thrive. Their budgets don’t fall as fast as as spending on hardware procurement and force size, but, as I have written, it now seems that there are 1.8 million people employed directly or indirectly by the Defense Department to manage the business of a military force of 1.1 million in uniform. (That’s 340,000 uniforms doing commercial or civilian tasks, 800,000 civil servants, and about 700,000 contractors.) Any way you slice it, that’s a heck of a back office, and it doesn’t seem to disappear as readily as the dollars for forces and procurement do.

Why do we get lumpy and bumpy cuts and not strategic ones? It’s all about the politics. Not only is politics “not beanbag” (as Mr. Dooley said), but it is the archenemy of strategic thinking. And it is the reason all the players in the defense world can assume that there is not really a defense drawdown — that somehow the end of the sequester fights of the last three years also means the end of falling defense budgets.

Take a look at the Pentagon: The service chiefs have been playing ostrich for some time now. Even with a tough sequester last year, they hope for better days. The latest evidence? Somehow, they convinced the White House to plan to send up an fiscal 2015 defense budget in early March 2014 that — though it complies with the post-sequester Murray-Ryan budget deal — will trot out a little $26 billion teaser above the budget request. In the olden days, this was known as the services’ “wish list,” what they would love to buy if they had more money. Service secretaries hated this end run; now Defense Secretary Chuck Hagel and the White House have embraced it.

Moreover, the Pentagon already got its holiday gift from the appropriators; the same holiday gift they have received for the last decade — money that doesn’t count against the budget caps. They call it the overseas contingency operations (OCO) budget — or war budget, for short. It has actually been a peace budget for years now, though — a way for the services to avoid internecine warfare by having a kitty all could share. The OCO budget has been a refuge of scoundrels: buying equipment unrelated to the war, transforming the Army, and paying salaries that were due but wouldn’t fit in the base budget.

Then there’s congressional profligacy. In the fiscal 2014 appropriations bill, legislators showed some fancy fiscal footwork, shifting money back and forth between the war budget and the rest of the budget, raising the OCO funds by more than $5 billion above the administration’s request, and then stuffing in more than $9 billion in operating expenses, as my colleague Russell Rumbaugh has pointed out. But why these contortions? To get that spending out of the base budget, leaving room for Congress to put back in the things their constituents make (but which the services wanted to cut), like the Global Hawk Block 30 unmanned aerial vehicle that the Air Force dumped and money to keep open the M-1 tank factory in Lima, Ohio, though the Army would rather let it close. Oh, and then there are things that the Pentagon never asked for, like $1 billion in equipment for the National Guard and Reserves.

And don’t lose sight of the way everyone in Washington is running for cover on the tiny, little retirement reform buried in the Murray-Ryan deal — the decision to provide less than a full cost-of-living allowance (COLA) to military retirees who are not yet 62 years old. Put on your battle caps, ladies and gentlemen — the incoming rounds on that one are still reverberating. At this point, we’ll never implement important reforms in military pay and retirement.

Let’s not leave the lobbyists unscathed. The lobbies have returned to Capitol Hill. The defense industry did pretty well last year, economically, especially in the middle of a drawdown and a sequester. And the industry knows that effective lobbying can pretty much protect major defense programs. We commit an apparently unnatural act to do so: We shrink the size of the buy — instead of 2,300 F-35s, we’ll probably end up with under 2,000 — and we stretch it out. This year, the industry did an even better lobbying job: The Pentagon gets enough money to buy 29 F-35s this year, the full production batch it had hoped for. But stretch will surely come in next year’s budget.

So, when it comes to defense and national strategy, “it’s the politics, stupid.” But here’s the problem. The defense budget will continue to fall. That’s what it does in a drawdown, when the country is no longer at war. The Pentagon will try to deny that reality, and the president may avoid talking about it — but if you look at the projected defense budgets starting in fiscal 2010, and then look back and see where they really went, the trend lines are always higher than the reality turned out to be. There’s even a term for it — a pitchfork graphic — because that is what it looks like. But so long as hope springs eternal like this, the drawdown is going to be messy and unstrategic. 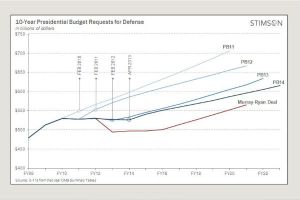 Worse, the safety net of the OCO is going to go away. Oh, it’s great to have around now, but it’ll get harder to give the Pentagon budget an extra, second budget, when Obama brings the troops home at the end of 2014. That means all the padding is going away and some real strategic budget planning has to follow. Watch this space. The inevitable is still inevitable, even if the services, Congress, and the industry have their hands over their eyes and fingers in their years.

Gordon Adams is a professor of international relations at American University's School of International Service and is a distinguished fellow at the Stimson Center. From 1993 to 1997, he was the senior White House budget official for national security. Twitter: @GAdams1941
Tags: Economics, Military, North America, Politics