The real question is why are we only hearing about it now.

Jeff Stein of Newsweek has reported that “a well-placed intelligence source” has confirmed that Saudi Arabia purchased Chinese-made DF-21 ballistic missiles in 2007 — apparently with the approval of the George W. Bush administration.

It’s the first intelligence source to confirm, albeit anonymously, something that’s long been rumored. It is a good bit of reporting — and I say this not simply because Stein quotes me. If Saudi Arabia bought the missiles in 2007, it has taken a long time for a reporter to get a source to actually confirm the suspected sale. But the timing of the leak isn’t surprising. Saudi Arabia is growing increasingly concerned about Iran, and over the past few years it has started talking a lot about its Strategic Missile Force. In the course of doing so, Riyadh has hinted that it has bought at least two new types of ballistic missiles — one of which is possibly the medium-range DF-21, which, in China, comes in both conventional and nuclear flavors.

The Saudi Strategic Missile Force dates to the 1980s, when Prince Khalid bin Sultan — then commander of the Air Defense Force — traveled to China to purchase DF-3 missiles. The Dong Feng 3, or “East Wind 3,” is also medium-range and nuclear-capable, but it uses liquid fuel and is not very mobile. So, many folks expected that the Saudis would eventually replace or augment it, either with another purchase from China or with one from Pakistan. In 1999, Prince Sultan, then the defense minister, visited Kahuta Research Laboratories in Pakistan, where A.Q. Khan was enriching uranium and building copies of North Korea’s Nodong missile, which Pakistan calls the Ghauri. At the time, one U.S. administration official told the New York Times that the visit was “definitely eyebrow raising.”

A few years ago, Jonathan Scherck, a former U.S. intelligence contractor, published a book called Patriot Lost, alleging that China delivered new DF-21 ballistic missiles to Saudi Arabia in 2003-2004. (He has also written a thinly veiled screenplay.) Although Scherck occasionally veers toward the conspiratorial, he’s believable when he sticks to what he knows. The book’s passages about how the intelligence community monitors changes in missile deployments by tracking construction at bases and the shipping practices of certain Chinese proliferators struck me as informed. Some of his details are wrong, and Scherck clearly wrote the book from memory, which is a fragile thing. But the U.S. government is concerned enough that it’s pursuing legal action to seize any money Scherck’s made on the book and prevent its further distribution. He’s not making all this up.

Stein’s reporting would seem to move this story forward, giving us an intelligence source and a possible explanation for why Scherck’s interest in the sale was unwelcome.

It used to be that Saudi Arabia did not want to call attention to its budding missile force. Khalid shrouded his ‘80s trip to China, and the ensuing shipments, in secrecy. Although news of the sale eventually broke, and although information about Saudi Arabia’s new missile bases near Sulayyil and Jufayr appeared in the press, Saudi officials kept mum.

In his 1996 memoir, Desert Warrior, Khalid finally shared a few details. He tells an anecdote that captures the initial Saudi concern for secrecy. Khalid recalls how a young soldier stationed at one of the bases revealed its location to his father over the telephone, unaware that his calls were monitored. The old man, according to Khalid, figured his kid was up to no good and lying about being posted to a secret missile base in the desert. Khalid, initially not sure what to do about the breach of operational security, claims he ultimately decided to relocate the old man and make him the base’s imam in order to keep him quiet. I don’t know if the story is true — maybe Khalid was just trying to refute rumors that the bases were staffed by Chinese — but the point is that, other than Khalid’s memoir, Saudis simply didn’t talk much about the Strategic Missile Force. Until now.

What’s changed, of course, is Iran. As concern grows in Riyadh about Iran’s nuclear and missile capabilities, the Saudi press is simply talking a lot more about the country’s arsenal of conventionally armed ballistic missiles. There is also the Internet, where there is a lot of easy-to-find chatter about Saudi capabilities. The result is a field day for open-source analysis.

Saudi officials have been more transparent as well. For example, in 2010, Khalid — by then deputy defense minister — cut the ribbon on a new headquarters building in Riyadh for the Strategic Missile Force. Saudi officials released a number of images of the building, both inside and out, and you can see it in satellite photos. 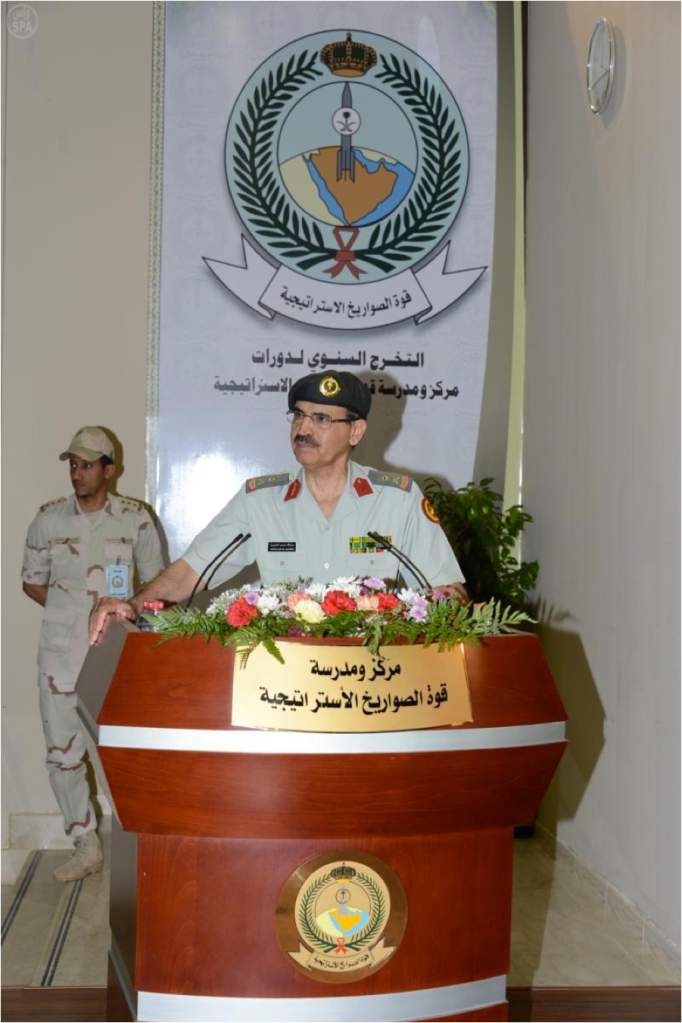 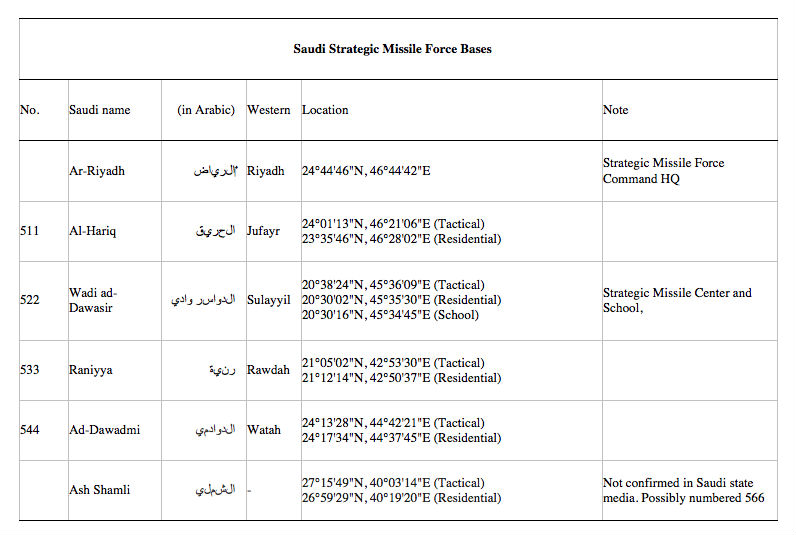 Thanks to the flood of media coverage, it’s actually quite easy to piece together the base structure of the Saudi Strategic Missile Force. Most of the bases have a residential area with houses, schools, mosques, and so forth. There is a second “tactical area,” which can be located several or even tens of kilometers away, where the missiles and launchers are located. My colleague Sean O’Connor described some of these locations in great detail in a recent Jane’s article. Others are just coming into view.

The most interesting image, however, is this picture of Khalid’s replacement — the recently removed Deputy Minister of Defense Prince Fahd — visiting the Strategic Missile Force headquarters in Riyadh. Now, it is normal for the Saudi Strategic Missile Force to give a visiting dignitary a gift — you know, something classy like a solid gold falcon in a glass case. In this instance, however, there is something much more interesting in the glass case: three missiles. 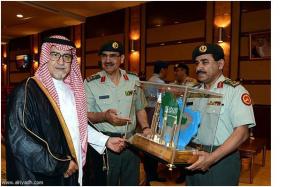 The missile on the far left is a DF-3 of the sort that Saudi Arabia purchased from China in the late 1980s. But the other two? One might be a DF-21 with a very pointy nosecone. What’s amazing is that the glass case suggests yet another missile sale we don’t know about — from China, Pakistan, or who knows where.

Here is an illustration from the U.S. National Air and Space Intelligence Center’s report Ballistic and Cruise Missile Threat that shows some of the candidates. 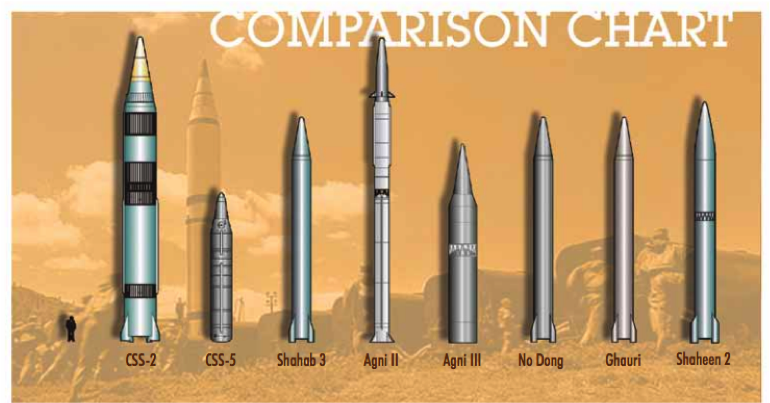 Although the NASIC illustration doesn’t show it, Chinese missiles like the DF-15 and DF-21 come in “C” variants with an elongated nosecone for accurate conventional munitions. Stein reports that, when the 2007 shipment of Chinese missiles arrived, “Two analysts [from the Central Intelligence Agency] subsequently traveled to Saudi Arabia, inspected the crates and returned satisfied that the missiles were not designed to carry nukes.” If I had to guess how Saudi Arabia might reassure the United States that its purchase was intended to carry conventional and not nuclear weapons, I would guess it relates to the payload and dimensions of the nosecone. If the missiles have a narrow reentry vehicle with lots of weight dedicated to guidance systems, there probably isn’t a lot of room for the sort of nuclear weapon that China or Pakistan could sell to Saudi Arabia, or that the Saudis could develop themselves.

But, holding aside the question of which missiles are in the glass case, it is pretty obvious that someone is trying to tell us something.

In his memoir, Khalid talks about the decision to buy the first generation of Saudi missiles in secret. On the one hand, it makes sense that Saudi Arabia wanted to have an operational missile force before anyone was the wiser, so that it could present the United States and others with a fait accompli. Then again, the whole point of having a deterrent force is lost if you keep it a secret! So the Saudis had to tell their neighbors sooner or later. Here is how Khalid described Saudi thinking:

The effectiveness of a deterrent capability depends on a potential enemy knowing of its existence. When our Strategic Missile Force was close to being operational, I wrote an analysis for the high command suggesting that, if our acquisition of Chinese missiles was not detected by November 1988, this would be an advantage; if not by February 1989, this would be greatly in our favor; if, however, it was not detected by June 1989, we should consider leaking the news ourselves as the object of acquiring the weapon would not have been achieved. As it happened we had no need to do so, because the Americans broke the news first.

With the DF-21 sale, the U.S. intelligence community kept quiet, perhaps because Saudi Arabia let them inspect the shipments. Now that the deal is done, it makes sense for the Saudis to start dropping hints. Gilded hints, in glass cases, perhaps. I wonder, though, if anyone at the CIA expected to see two new missiles in the case.

However many missiles the Saudis may have bought, Riyadh is now eager to publicize its growing capabilities. The Saudis have been making very clear over the past year that they are not happy campers, as symbolized by their recent decision to reject a long-sought Security Council seat over frustration with policies regarding Syria and Iran. Highlighting the Strategic Missile Force is another reminder to the United States that Saudi Arabia can look out for number one if negotiations with Iran don’t pan out.  If those talks collapse, who knows what we’re likely to start seeing in glass cases.

The Foreign Relations Committee, in a rare breach of decorum, engages in a bitter dispute over how to pressure Riyadh.

When Home Is a Prison, More Saudi Women Are Choosing to Flee

The latest refugees from the kingdom fled to Tbilisi, Georgia, and spoke to Foreign Policy before seeking asylum in the West.

Like it or not, Washington’s ties with Riyadh still matter.