The world's factory is turning into an R&D machine -- and fast catching up with America.

In his recent State of the Union address, U.S. President Barack Obama argued that “the nation that goes all-in on innovation today will own the global economy tomorrow” and that China isn’t exactly “standing on the sidelines.” A new U.S. federal report shows just how hard Beijing is working to get into the game.

Now that three-plus decades of China’s so-called one-child policy has helped create what the International Money Fund calls a “sharp decline” in the pool of extra (read: cheap) labor, Beijing is urgently looking for ways of designing its own products rather than manufacturing someone else’s. Put another way, it wants to shift from making iPhones to inventing them. A recent report by a respected U.S. federal agency — which shows Chinese high-tech output nearing that of the United States, China committing an increasingly large portion of its wealth to R&D, and a huge jump in the number of Chinese graduates with engineering degrees — suggests it may soon have that chance.

The country is already more innovative than the massive, neo-Maoist factory assembly lines so prevalent in U.S. popular imagination might suggest. China’s start-up scene is abuzz with new products, new ideas, and new investment, with some indigenous innovations like mobile messaging app WeChat offering a user experience that can rival that of any U.S. competitor. On Jan. 16, the Wall Street Journal hailed the “rise of China’s innovation machine.” A new report by the National Science Board (NSB), which sets policy for the U.S. government’s National Science Foundation, details what that shift actually looks like.

Although the NSB report is careful to note that it focuses on “broad trends,” its fundamental conclusion is unmistakable: The center of high-tech gravity is shifting to Asia, and to China — the United States’ greatest geopolitical rival — in particular. China’s share of the world’s high-technology manufacturing spiraled from 8 percent in 2003 to 24 percent in 2012, the report says. The United States’ share of 27 percent may not rank at No. 1 for much longer, given that China’s overall R&D is growing at 18 percent per year. High-technology output over the past 15 years looks like this: 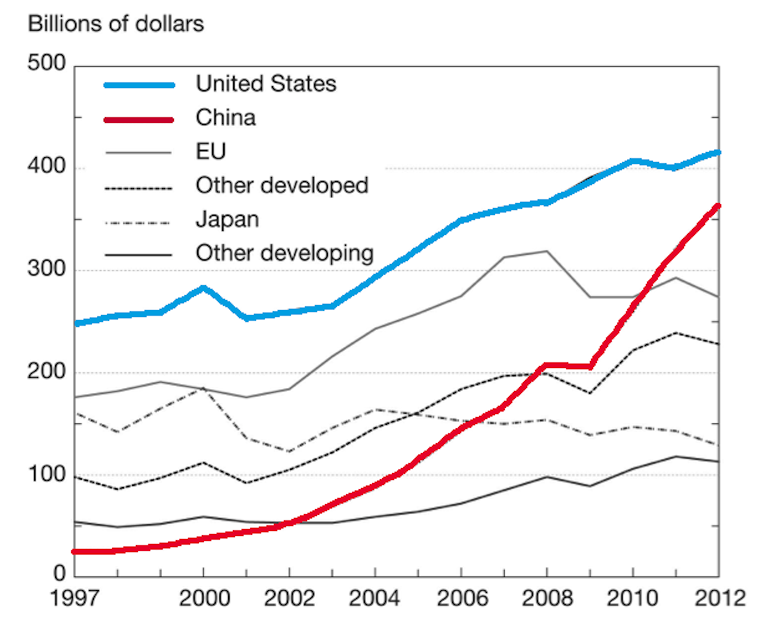 These trends look set to continue. In a Feb. 6 conference call to launch the report, NSB Chairman Dan E. Arvizu said it’s “possible China will overtake the U.S.” in high-tech output “in the near future.” That doesn’t directly make the United States worse off: The international R&D pie is actually getting bigger, and the United States’ slice looks smaller only by comparison. The United States and even Europe have actually poured more combined private and public money into R&D investment over the past decade, only to see their shares of the total pie shrink. From 2001 to 2011, the U.S. portion of global R&D fell from 37 percent to 30 percent. Meanwhile, China’s share jumped from 2.2 percent in 2000 to 14.5 percent in 2011.

Another area of striking gain for China is what the report calls “R&D intensity,” which compares R&D expenditures against a given country’s GDP. The U.S. share has held mostly steady over the past 20 years, even declining slightly in 2010 and 2011. Meanwhile, the report shows China’s own focus on R&D ramping up fast: 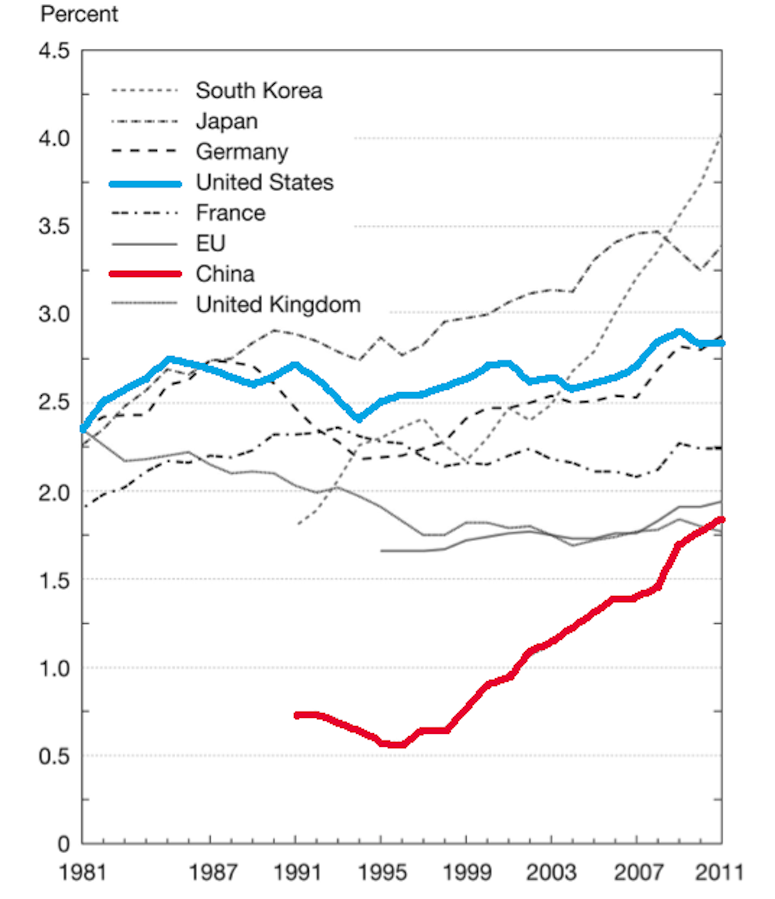 And then there’s education. In 1999, fewer than 1 million Chinese graduated from a university; by 2013, it was almost 7 million. The net result, according to the NSB report, is that China is now churning out far more recipients of “first university degrees” than the United States, defined as programs sufficient to prepare the holder for entry into advanced research programs or jobs: 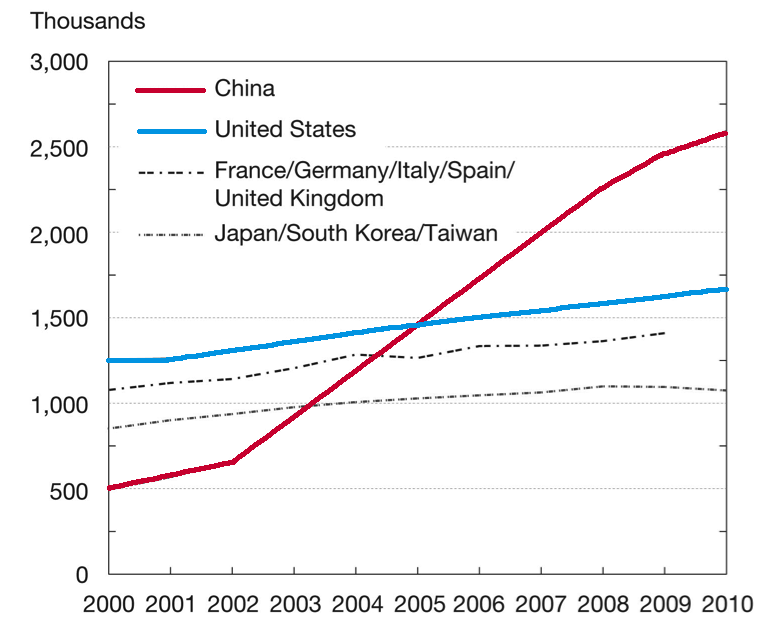 That may not be particularly surprising or worrisome, given that China’s population of approximately 1.3 billion dwarfs that of the United States, which has roughly 316 million people. The devil is in the details: The types of degrees being awarded. In China, 31 percent of its undergraduates leave with degrees in engineering; in the United States, the figure is just 5 percent.

None of this means that China will out-innovate the United States anytime soon. High-tech industry still accounts for a greater proportion of GDP in the United States — 40 percent — than in any other country. And while the global financial crisis and subsequent economic downturn didn’t spare the United States, where high-tech expenditures stagnated in 2009 and 2010 for the first time in 50 years, investment soon picked right back up.

China, meanwhile, is facing serious challenges in its quest to lead the world in innovation. Many of its most talented graduates leave the country to study or conduct research in richer countries. Its universities are plagued by bureaucratic red tape and intellectual dishonesty. The Chinese education system still emphasizes rote learning over creativity, raising legitimate questions over how many future Jobs, Gates, and Zuckerbergs populate its ranks. NSB Vice Chairman Kelvin K. Droegemeier told reporters that “China is able to produce a lot of very smart people, but they are challenged substantially” when it comes to turning discoveries into useful new products — the hallmark of innovation.

Nevertheless, over time, China’s gargantuan investment in science and technology is sure to make a difference. Ray M. Bowen, a professor emeritus at Texas A&M University and a member of the NSB, stressed to reporters that “developing a high-tech domestic workforce” is a “key building block of innovation.”

Taken together, the report’s findings confirm two trends important to those who care about the U.S.-Sino relationship: First, the United States is, and remains, the technology center of the world, with an unmatched amount of researchers and R&D money and the kind of cultural hard-wiring that continues to produce breathtaking discoveries. Second, China is catching up.

Bowen stressed that the “changed global landscape” means the United States “must be more vigilant” if it wishes to remain on top. Will it? Bowen was optimistic: U.S. researchers have historically found ways of outstripping their international competitors, and the NSB official said he would “not be surprised to find out the United States does quite well in maintaining” its capacity as the world’s innovation powerhouse, at least for a while longer.