Fleshy oysters and severed phalluses: The best sexual stimulants from around the world.

Once upon a time, Greek mythology tells us, Cronus, the leader of the Titans, castrated his father Uranus in a vengeful fit and flung his testicles into the sea. But Uranus was a god, and his virility not so easily neutralized. His testes, tossing in the surf, gave way to a frothy foam that produced Aphrodite, the goddess of love who floated to shore astride a scallop shell.

Ever since, aphrodisiacal lore has been replete with severed genitalia and shellfish.

In the intervening millennia, the world has discovered Viagra, Cialis, and vajazzling. Yet the allure remains of animal penises (for strength) and oysters, fleshy and moist as Aphrodite herself (thought to heat the blood). Never mind modern pharmaceuticals — there’s a world out there relying on the tried and true to get them through this Valentine’s Day.

Here are five of our favorite libido enhancers from around the globe. (Warning: some of these might be hard to find at the neighborhood drug store) 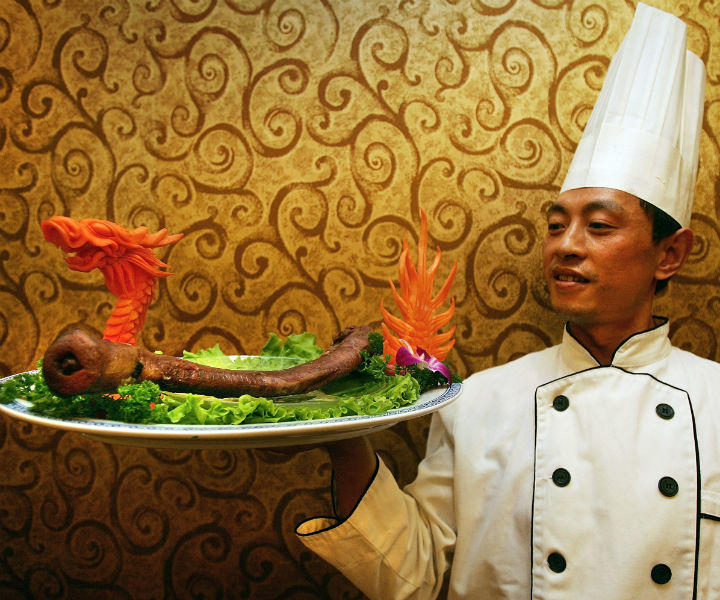 If you happen to be in Beijing while suffering from a lackluster sex drive, swing by Guolizhuang, which Agence France Presse describes as “China’s only penis specialty restaurant chain… popular among business parties and government officials.” For $200 you can get yourself a hot pot made from a potent cocktail of genitalia, including those of bull, deer, donkey, goat, and dog. (The restaurant’s name translates to “strength inside the pot.”)

Consuming animal genitalia to boost a man’s sexual potency is a notion that crosses cultures and millennia. Among those who have dabbled with the organ’s properties as an aphrodisiac include the ancient Greeks and medieval Arabs, contemporary Nicaraguans, and a host of discerning diners from all over Asia. “It’s stated that by eating the genitalia of animals which were viewed as highly sexual — bulls, goat, cockerels — the qualities of those animals would be transferred to the person eating them,” Daniel Newman, author of the recently published book, The Sultan’s Sex Potions: Arab Aphrodisiacs in the Middle Ages, told Foreign Policy.

Dried, severed penises of all varieties can be found in market stalls and soup shops across Asia. Tiger penis — illegal in many countries — is particularly prized, so much so that in 2005 the U.S. Fish and Wildlife Service issued a guide for identifying authentic tiger penises from fakes derived from cattle organs. The key is to look for the barbs, a feline penis feature that helps induce ovulation. Barbs carved into cattle penises will look more distinct than those on dried tiger penises. 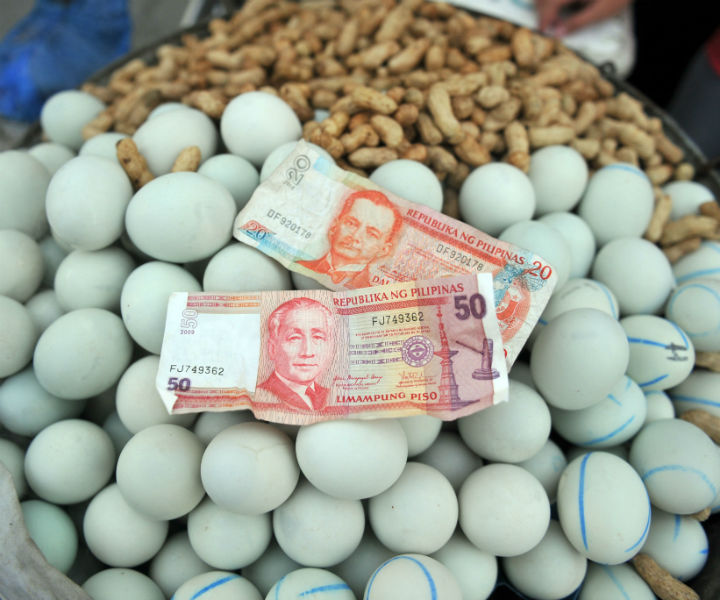 2.  Eggs — And Not the Sort You Find at the Farmer’s Market

The iguana is considered a particularly virile animal. The male iguana has two penises, can maintain an erection for up to a week, and emits a strong sex pheromone from its inner thigh.

And yet, it’s not the genitals of the male iguana that are considered libido-enhancers in places such as Nicaragua. Rather, it’s the female iguana’s unlaid eggs that are the prize: they’re rumored to cure impotence in men and are a popular ingredient for libido-enhancing stews, including one called Levanta Muerto, or “Raise the Dead.” (The stew also includes a healthy dose of bull testicles.)

Filipinos similarly associate eggs with sexual vitality. Balut, a steamed, fertilized duck embryo eaten straight from the shell, is thought to have aphrodisiacal properties, imbuing the diner with energy and vigor. (It’s also considered notoriously difficult for first-timers to eat.)

Iguana eggs and duck embryos may not sound enticing, but could there be something to the notion that they can help give flagging love lives a boost? Maybe — at least when they’re rotting. A 2009 University of Naples study found that hydrogen sulfide — present in the odor of rotten eggs — can cause erections in men. 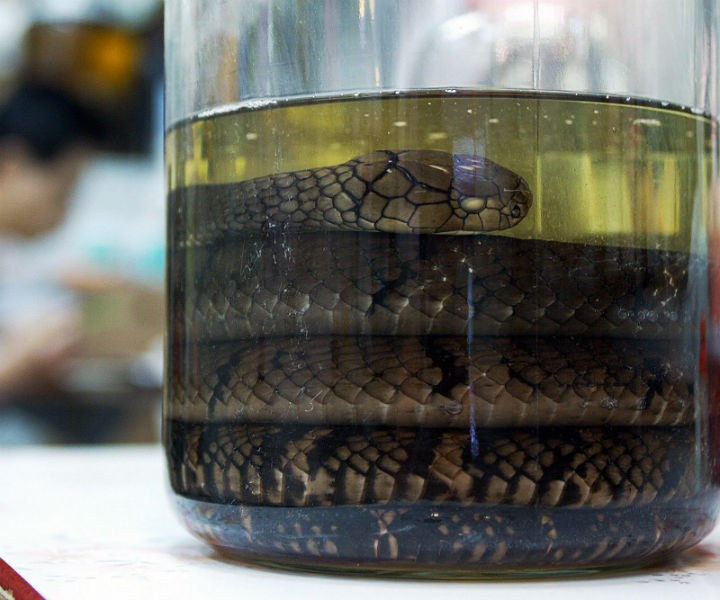 Is there any animal more lascivious than the serpent, the sly tempter that induced Eve to commit the original sin? It’s no wonder that people across Asia imbibe snake wine, drink its blood, and even swallow its still beating heart in an effort to harness its purportedly fortifying properties.

Snake skin, organs, blood, venom, and bile have all been used medicinally in China for millennia. But those interested in bolstering their sex drive should look to snake wine: a grain alcohol or rice wine infused with the body of a snake, its venom, or both. (You can learn to make your own here.)

If you happen to be in Vietnam, you might follow Anthony Bourdain’s lead and try eating a cobra’s still beating heart, chased with a shot of cobra blood. 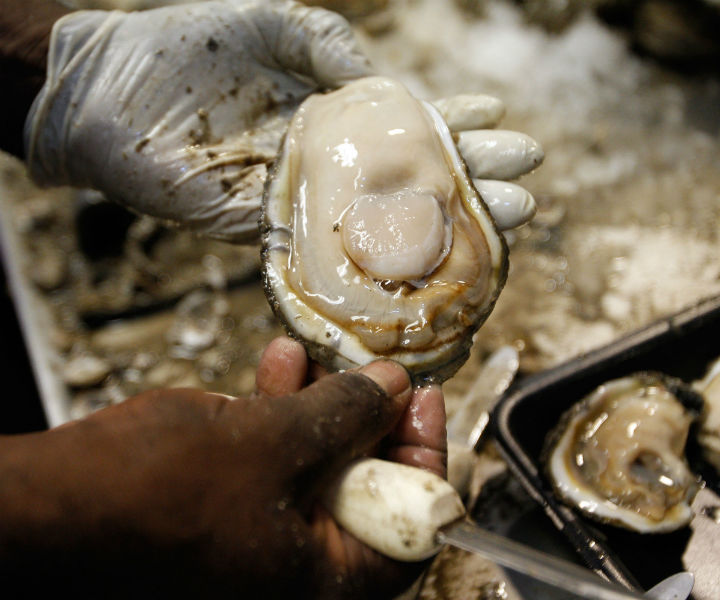 The famed oyster is lauded the world over for its aphrodisiacal properties. The sensuous experience of letting a raw oyster slide down the throat and the animal’s resemblance to female genitalia probably don’t hurt its reputation.

In The Joy of Sexus: Lust, Love, and Longing in the Ancient World, author Vicki Leon dissects the Greco-Roman veneration of the oyster — “the fleshy symbol of Aphrodite,” as she calls it. She cites an old Roman court document that details the story a man who manages to woo and wed a wealthy widow simply “by feeding her a splendid dinner of oysters, sea urchins, cuttlefish, and lobster” — “an aphrodisiac blue-plate special” as she calls it.

And, as with eggs, there may be something to these tales. In 2005, a team of marine researchers found that bivalve mollusks contain rare amino acids associated with the production of sex hormones in both men and women. They’re particularly potent in the spring, so you still have time to get shucking. 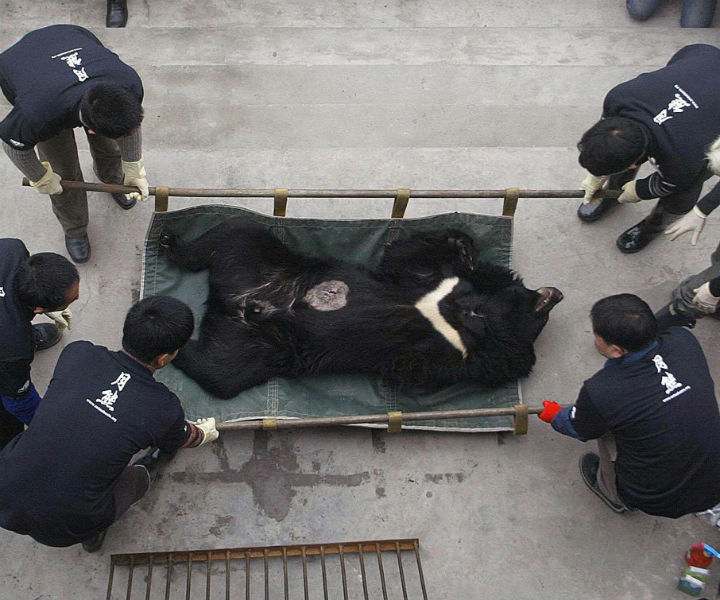 A remedy tailored to female sexuality is a rare thing. Historically, aphrodisiacs have been distinctly phallo-centric, according to Newman. The historical record reveals a cross-cultural preoccupation with male-focused panaceas meant to induce tumescence and increase a man’s stamina — or as in one recipe from Newman’s book, enable a man “to please 10 slave girls in one night without feeling either fatigue or boredom.”

But one 13th century Persian physician, Nasir al-Din al-Tusi, did put together a concoction intended for women’s bodies: a cocktail of bear bile and a very sweet grape juice. It was unfortunately, not intended to boost women’s pleasure, however. Tusi’s potion, and other potions designed for women in the medieval Arabic world were marketed to men, and focused on maintaining “the tightness and hotness of the vagina,” or “making the vagina like that of a virgin” according to Newman.

Not a pleasure booster for women, it seems, but bear bile does come with one bonus: It’s also said to double as a contraceptive. (Don’t try this at home.)