The Men Who Really Run the Pentagon

Bob Gates wrestled the defense budget back from the Joint Chiefs. Chuck Hagel is handing it back.

Before Chuck Hagel was nominated to be secretary of defense about a year ago, he made a reputation for himself as a independent Republican politician who described Pentagon spending as “bloated.” In office, however, the former Nebraska senator has argued that the Pentagon should be rescued from historically minor and appropriate reductions. In doing so, he seeks to reverse one of the few real reforms that Secretary of Defense Robert Gates before him enforced on high spenders inside the Pentagon and in Congress.

Hagel and the director of the Office of Management and Budget (OMB), Sylvia Mathews Burwell, say they want to revive the old “wish list” process in which the Joint Chiefs of Staff used to connive with each other and Congress, behind the back of secretaries of defense and OMB, to make additions that couldn’t cut the mustard in the regular budget review process.

Hagel has shown himself to be the individual of lesser stature that many were stunned to observe at his infamous confirmation hearing at the Senate Armed Services Committee last year. The Hagel-OMB undertaking also reveals who or what is really running the Pentagon these days: As with feckless secretaries of defense in the past, it’s the Joint Chiefs of Staff (JCS) that run the show.

Gates deserved some real praise for stopping the JCS from running behind the backs of defense secretaries (and presidents) to solicit spending above and beyond officially approved defense budgets. For years, the JCS had pre-arranged with high-spending members of the Senate and House Armed Services Committees to be asked at hearings to submit lists of programs for extra spending. The JCS preferred to call these lists “unfunded requirements;” everyone else called them “wish lists.”

As a national defense staffer in the Senate Budget Committee in the 1990s, I often listened to Armed Services Committee staffers boast about how they could supplant defense budgets — defying the president, OMB, and even DOD — with the help of eager members of the JCS. Either clueless or too weak to put a stop to the process, secretaries of defense simply stood by, making themselves into figurative pigmies on budget, hardware, and even political issues. Ships, planes, vehicles, and a host of other programs were either increased or started through this process — all without consulting the secretary of defense or even the president. Politically, the JCS was making a monkey of them both.

The problem was so bad under William Cohen, secretary of defense at the end of the Clinton administration, that his staff had to call me at the Senate Budget Committee to find out what was on the lists the JCS had submitted at Armed Services Committee hearings. The secretary of defense had simply been cut out of the process. Even the blustering Donald Rumsfeld succumbed to the practice, despite having pledged early on to put an end to it.

It would fall to Gates to finally eliminate the wish lists. An astute politician and skilled bureaucratic infighter, the Bush holdover began in 2009 to require the Joint Chiefs to show him the lists before they went anywhere. Then he simply told the chiefs to take almost everything — and then everything — off the lists. The duplicity stopped — and everyone knew who was in charge in the Pentagon.

But the wish list is making a comeback under Hagel. As Bloomberg reported last month, the defense secretary and OMB recently “directed” the Joint Chiefs to put together a $26 billion list of additions to the 2015 defense budget. They’re calling it an “investment fund” that Congress could make possible with additional money, above and beyond the $498 billion the Pentagon has already been allotted in the budget that will be submitted on March 4. Pentagon wags almost immediately dubbed the fund a revival of the old wish lists, and people inside the building have made it known to me that the Joint Chiefs are already haggling among themselves over who gets how much and what goes on the list — some of it clearly choreographed to provoke pleas of eager consent from specific program advocates on Capitol Hill.

Even with that $498 billion capped by current law — based on Congress’ recent modifications to the Budget Control Act of 2011 and its notorious sequestration process — finding the extra $26 billion is child’s play in the current budget and political environment. Not only can Congress rewrite the budget cap for 2015 — just as it did for 2014, when it added $19.2 billion to the level the BCA would have required — it also has a broad array of budgetary gimmicks to stuff the wished-for “investment fund” into 2015 appropriations.

One easy way to skirt the cap is to magically convert non-war spending into “war” spending (also known as the Overseas Contingency Operations fund). Last year, Congress used this method to add an additional $10.8 billion to the 2014 defense budget over and above the $19.2 billion they added by rewriting the Budget Control Act. If they added a total of $30 billion in 2014, adding $26 billion in 2015 will not be hard. All that will be needed is for the Joint Chiefs to say they want the money. Their eager facilitators on Capitol Hill will be all the more receptive in an election year.

Clearly,  the secretary of defense won’t be calling these shots. That Hagel is reported to be “directing” the Pentagon to add this $26 billion “investment fund” is a bad joke. Having said that Pentagon spending is “bloated” and “needs to be pared down” prior to his confirmation hearing, Hagel has reinvented his DOD budget song and is looking for ways to push the numbers higher, not lower. Even without the wish-list additions, the 2015 budget is higher than the $450 billion in today’s dollars the Pentagon averaged during the Cold War — when the United States faced the existential threat of the Soviet Union and a dogmatically hostile Peoples Republic of China. With the wish-list, Hagel will have more to spend than most secretaries of defense since the end of World War II — and that’s according to the Pentagon’s own budget records.

If you abandon the Pentagon’s self-serving method of measuring inflation in its own budgets and use instead inflation as measured for the overall U.S. economy, the gigantic size of contemporary Pentagon spending becomes truly remarkable. Using OMB’s gross domestic production (GDP) measure of inflation, the current $498 billion Pentagon budget is $150 billion above the Cold War average, not $50 billion above it. That means that Hagel will have more to spend than virtually any secretary of defense before the advent of the wars in Iraq and Afghanistan (See Fig. 1). 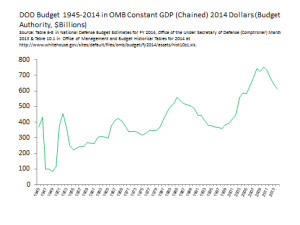 Moreover, the new wish list begs the JCS and Congress to play games with the money to ensure it is spent.

Those games have already begun. In its daily summary of defense news, Politico has recounted how the $26 billion “investment” slush fund is being and will be misused. In one gambit, the Navy was reported to want to dangle the USS George Washington aircraft carrier before the sea power advocates in the House Armed Services Committee, offering to let it stay in the battlefleet if they fund an already scheduled  refurbishment of its nuclear power plant as a part of the “investment fund.” The Navy might do the same with the P-8 surveillance aircraft, which recently flunked some testing, to help keep it alive. There is even talk of dangling a few F-35 Joint Strike Fighters in the fund — confronting Congress with the prospect of raising the unit cost, already astronomical, if it fails to agree. The gaming predicted by some is sufficiently rampant for Politico to flippantly ask its readers, “What would you buy if you had an extra $26 billion?…Please send along your ideas.”

With his servile modification to the “wish list” process and his capitulation to budget expansion business as usual, Hagel has made apparent his basic nature: Formerly a critic of “bloated” Pentagon spending, he now makes himself an advocate of pumping up a DOD budget already at historically high levels. That is the politically safe turf, laid for him by the Joint Chiefs’ assertions that only more money, piled on top of a historically high spending level, can save America from what they like to characterize as insufficient resources.

It is a sad end to the hope that Chuck Hagel would bring the toughness and skepticism of a former non-commissioned officer and a wily, independent politician to the top job in the Pentagon. Instead, like too many of his predecessors, he looks more like a facilitator for business as usual.

Spare us these pols who seek to impress but never make a dent.