America Has a Plan. And, No, It Isn’t One That Israel Would Like.

Middle East leaders are beating a path to the White House’s door. Israeli Prime Minister Benjamin Netanyahu will meet with President Barack Obama on March 3, and Palestinian President Mahmoud Abbas will arrive on March 17 to discuss the U.S. administration’s diplomatic effort to reach a two-state solution.

Although Secretary of State John Kerry has said that “failure is not an option” in these talks, the reality is that both Israelis and Palestinians assume that there is only a slim chance of finding a conflict-ending solution. The president himself put the odds at less than 50 percent. With the Obama administration’s goal to reach a negotiated settlement set for the end of April, we could be witnessing the death of the two-state solution. A key, but often unasked, question is whether the American public even cares.

A public opinion survey I commissioned, which was conducted by the polling firm GfK, found that U.S. popular support for a two-state solution is surprisingly tepid. What’s more, if the option is taken off the table, Americans support the creation of a single democratic state — in what is now Israel and the Palestinian territories — in which Jews and Arabs are granted equal rights. The GfK survey consisted of 1,000 interviews conducted through an Internet panel and was weighted to ensure that the results were consistent with several demographic variables, such as age, education, and income.

The Obama administration’s focus on mediating an end to the conflict has been predicated on two assumptions — that a two-state solution is in the national security interest of the United States, and that the current diplomatic efforts may be the last chance to achieve it. Americans themselves, however, are more lukewarm on the possibility of Israeli and Palestinian states living side by side: fewer than four in 10 survey respondents preferred a two-state solution. 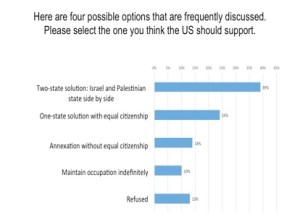 If the Obama administration is right that the window to reach a two-state solution is closing, the plurality of Americans who do support that option may start thinking about other ways to resolve the conflict. If efforts to negotiate creation of a separate Palestinian state fail, my poll shows that about two-thirds of those who had preferred the two-state solution would shift their support to a one-state solution, with equal citizenship for Jews and Arabs.

Even among respondents who said they wanted American diplomacy to “lean toward Israel,” 52 percent said they would support one state with equal citizenship — which could, of course, mean the end of Israel as a Jewish state. 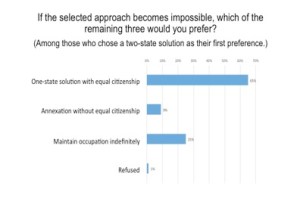 For Israelis, a shift in U.S. public opinion toward a one-state solution — which is not even an option on the negotiating table — would be extremely problematic. That is to say, most Israelis prefer not to make the choice between Israel’s Jewishness and its democracy but when forced to do so, they are divided: Roughly half of Israeli Jews say that they care about Jewishness and democracy equally, while a quarter favor one over the other. Palestinians may welcome support for equal citizenship in one state, but will not have the power to achieve it on their own without Israeli cooperation.

While Israelis are divided over whether to prioritize their state’s Jewishness or democracy, Americans’ preferences are less ambiguous. When asked which of the two options they favor for Israel, two-thirds of respondents chose democracy over Jewishness. Unequal citizenship is simply antithetical to being an American — whether one is pro-Israel, pro-Palestine, or neutral. 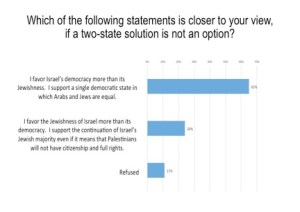 So what does it all mean? It means that if the two-state solution fails, the conversation among the American public might shift to that of a one-state solution as the next-best thing. If American officials feel pressured to respond to this, it will likely create tension in U.S.-Israeli relations.

American public opinion, of course, is fluid. If Israeli-Palestinian negotiations fail, both sides will engage in a war of narratives in an attempt to convince the American public that the other side is to blame for the collapse of the talks.

Israelis usually do far better than Arabs in these contests. Just look at what happened after the 2000 Camp David talks: Although President Bill Clinton promised the Palestinians they would not be blamed should negotiations fail, that was just what he did as soon as the summit ended. Regardless of what Obama or Kerry would do if these negotiations fail, many U.S. politicians can be counted on to quickly embrace the Israeli version of events.

But as soon as the dust settles, the end of the two-state solution will exert a powerful transformation on American attitudes. For U.S. officials, the effect would be paralyzing — American leaders simply wouldn’t know what to advocate if two states were not on the table. At the moment, it is not politically feasible to advocate for a one-state solution with equal citizenship, nor accept a permanent occupation or Israeli annexation of Palestinian territories without equal citizenship.

This dilemma may partially be driving Washington’s current diplomatic push. And if the Obama administration’s efforts fail, it is unlikely that American leaders would do anything but pretend that the two-state solution was still on the table. No American politician wants to choose between Israel’s democracy and its Jewishness — even if the polls show that the choice is clear to the American people.

Pretending neatly rationalizes paralysis, but it would not hide the naked truth for most people. If the peace talks fail, no number of assurances from the White House could stop the inevitable sense of resignation at home and abroad. The American people are clear about their views: Occupation and unequal citizenship are a losing cause.

Shibley Telhami is professor of government and politics and director of the Critical Issues Poll at the University of Maryland, and a nonresident senior fellow at the Brookings Institution. He is co-author of The Peace Puzzle: America’s Quest for Arab-Israeli Peace, 1989-2011, and of a forthcoming sequel on the Obama and Trump presidencies. Twitter: @ShibleyTelhami