Old People Are Sucking Us Dry

Why senior citizens are bankrupting America.

Rich countries around the world have spent the past several years getting to grips with the costs of their aging populations. Some, like Norway, have a pot of gold ready to pay for their population’s retirement. Others, like Japan, have gone heavily into debt. But no country has allowed demographics to threaten its growth the way the United States has.

It may seem strange that this calamity isn’t a regular highlight of evening newscasts or trending on social media. Perhaps it’s because the scope of the problem is visible not on faraway battlefields or in corporate boardrooms, but rather in careful yet obscure research papers such as “Trends in Discretionary Spending” by D. Andrew Austin, an analyst at the Congressional Research Service.

In the below figure, Austin splits federal spending into three parts: mandatory outlays required by law, which are mainly for Social Security and Medicare; discretionary spending that is approved annually, including defense; and net interest paid on the national debt. 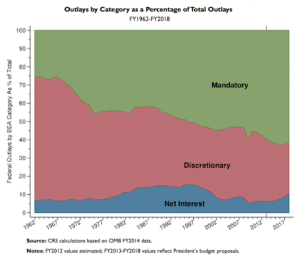 Thanks to low interest rates and the U.S. Treasury’s canny refinancing of the national debt, interest payments are at extremely low levels as a share of federal spending. The real action is happening higher up in the graph: Mandatory outlays are eating into discretionary spending almost every year. At the height of the wars in Afghanistan and Iraq, the share of mandatory outlays was still growing. Even the peak years of the recent fiscal stimulus were only a bump in the road.

Under current legislation, this trend will only continue. As Austin’s figure shows below, both defense and non-defense outlays — the two components of discretionary spending — will soon reach new lows as a percentage of the economy. 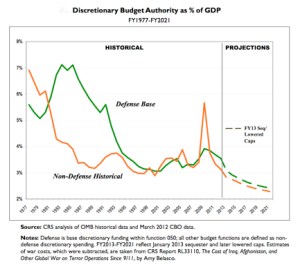 And this is where the problem arises. Non-defense discretionary spending is where the government does everything that might help the economy grow: education, infrastructure, scientific research, energy, space exploration, and the like. Some of these investments can take decades to pay off, but they often yield handsome returns: for example, as much as $34 for every $1 spent on research into cardiovascular disease.

By contrast, much of mandatory outlays are designed to prevent drags on growth. Reducing poverty and improving health among retirees and the elderly frees up time and resources for the working-age population. Undoubtedly, this is important to the economy as well. Yet the current trend has the government cannibalizing the future to protect the present; the country is spending most of Americans’ tax money not to charge forward but to stand still.

This situation is not the fault of the elderly. They were promised certain benefits during their lives, and they are at least entitled to try to collect them. This is a time of sacrifice, though, and everyone — including the country’s seniors — must surely give a little. The problem is that no sitting politician seems willing to ask them.

It is far easier to cut from the discretionary budget than from mandatory outlays. Republicans want to curtail programs they see as wasteful, from research in political science to food stamps. Democrats are usually willing to listen as long as tax increases are part of the bargain. Together they even allowed the sequester, a supposedly unthinkable set of arbitrary cuts, to slash discretionary spending across the entire government. But even Republicans who deplore the size of the federal government are reluctant to bring Social Security and Medicare into the discussion.

As a result, the discretionary share of spending dwindles while mandatory outlays go unchecked. Some of the costs of this choice may already be apparent. Consider, for example, how the ratio of patents to GDP has evolved in the United States and other major economies. From almost identical starting points in 1991, China and Germany have managed to raise their productivity in terms of patent applications much higher than the United States has, as demonstrated below in my table. 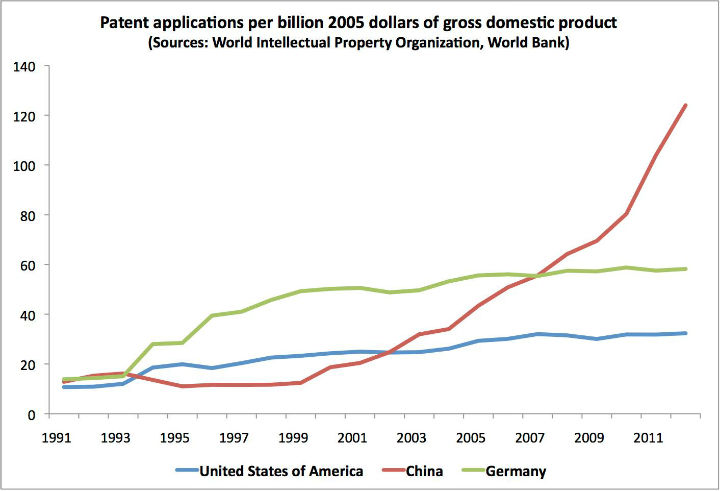 Basic scientific research leads to patents only with a lag, and China may be much more interested in immediate practical applications for manufacturing. But there is no good excuse for the United States to fall so far behind Germany in technological innovation. The German government now spends more than $240 per person on science, which would work out to more than $75 billion a year in the United States. But the combined budgets of the National Science Foundation and the National Institutes of Health come to less than $40 billion.

As for infrastructure, the United States ranks 19th in the World Economic Forum’s Global Competitiveness Report, behind even ailing Portugal and Spain. In education, the Organization for Economic Cooperation and Development’s most recent testing of 15-year-olds found the United States at the bottom of the G-8 countries and below two dozen other economies as well. As a percentage of GDP, public spending on education is lower in the United States than in many former communist and sub-Saharan African countries. These are far from perfect metrics for economic potential, but they can hardly be positive signs for the United States.

It will be several decades before the bulge in the country’s population pyramid is smoothed out. Over such a long period, discretionary programs that enhance economic growth could actually help to pay for retirement benefits. Yet Washington operates with a much shorter time horizon, one in which discretionary spending must do battle annually with the unchanging demands of mandatory outlays. Because of well-publicized waste in some programs, discretionary spending as a whole will always be at a disadvantage in this fight. But it has lost so many times that muscle is now being cut along with fat. Unless politicians start to focus on the long term, nothing but bones will be left.