If it survives the current crisis in one piece, Kiev will have a new lease on its democratic future.

Ukraine’s territorial integrity currently hangs in the balance. With Russian troops occupying Crimea and a referendum on secession scheduled for March 16, the former Soviet republic may not emerge from the current crisis territorially intact. If it does, however, Ukraine will have a new lease on its democratic future. In its 23 years of independence, Ukraine has struggled with both state- and nation-building. Regional cleavages — between the predominantly Russian-speaking east and predominantly Ukrainian-speaking west — have made for an often dysfunctional and polarized political process. Paradoxically, the current crisis has gone a long way toward bridging these divides, with ousted President Viktor Yanukovych’s fierce repression, and now Putin’s incursion into Crimea, uniting Ukrainians from across the country in support of the rule of law and civil and political rights. This, in turn, has opened up a new window of opportunity for democracy-building.

This window of opportunity, however, has been largely obscured by a misreading of the origins of the crisis. Ukraine did not end up in the current mess, as many have suggested, because the western and central parts of the country refused to be governed by a democratically-elected president with a support base in the east. The western part of the country already had a turn at governing the country, from 2005 to 2010, with Viktor Yushchenko as president and Yulia Tymoshenko as the prime minister. When Tymoshenko lost a free and fair election to Yanukovych in 2010, the transition of power was smooth. In 2012, despite growing concerns over the president’s authoritarian methods and the chipping away of the main democratic achievements of the post-Orange Revolution period, the opposition participated in parliamentary elections and accepted the victory of Yanukovych’s Party of Regions. The opposition in the center and west of the country did not attempt to use civil unrest to constrain the president’s ability to govern. There were two policy-motivated protests — over taxes in 2010 and over language policies in 2012 — but both ended quickly and peacefully.

A third policy-motivated protest, which began on Nov. 21, 2013 in response to Yanukovych’s refusal to sign an EU association agreement, would have likely fizzled out in less than two weeks had it not been for the government’s harsh response (by late November, student organizers had already decided to leave Maidan, or Independence Square, in Kiev). But over the course of several days in late November and early December, a series of incidents of police brutality and seemingly random persecution reinvigorated the protests, expanding the number of people on the streets exponentially. Thus, Euromaidan is actually a misnomer. Both the timing of the popular mobilization and the polling data (more on that soon) show that the protests weren’t fundamentally about the unsigned EU association agreement — or even about western Ukraine’s opposition to Yanukovych.

Above all, the protests were motivated and sustained by police brutality; extra-judicial persecution in the form of kidnappings, torture, and killings; and arbitrary criminal prosecutions of hundreds of protesters. Fig. 1 shows the results of surveys conducted over the last three months by Ukraine’s premier pollster, the Kiev International Institute of Sociology, confirming this point. Throughout the three months of protests, the main motivating factor that brought protestors to Maidan was the repression that the government perpetrated against protest participants. An EU-oriented foreign policy and the ousting of Yanukovych were only secondary goals. 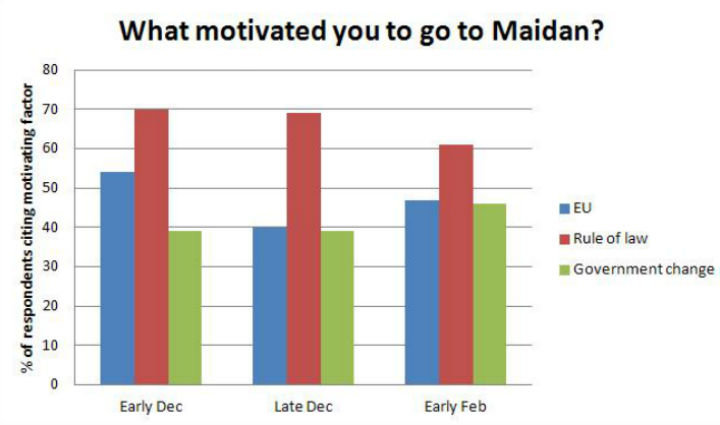 Widespread opposition to police brutality ended up mitigating, rather than exacerbating Ukraine’s long-standing regional divisions. The majority of easterners and southerners did not express support for the protests in Kiev, but neither did they actively support Yanukovych at any point during the protests. There were no sizable pro-government rallies and no easterners and southerners — with the exception of paid thugs — flocked to Kiev to stage counter-protests. On the contrary, some traveled to Kiev to join Euromaidan; polls indicate that somewhere between one-fifth and one quarter of the protesters hailed from the east and south. Others joined local Euromaidan protests throughout the southeast. In the waning days of the Yanukovych regime, local Euromaidan activists in Dnipropetrovsk and Sumy in the east and Odessa and Zaporizhya in the south stormed regional administration buildings and even lay on train tracks to stop local military reinforcements from traveling to Kiev to suppress the protests. Between 23 and 35 percent of poll respondents from the south and east of the country blamed the government for escalating the conflict, and between 19 and 27 percent viewed them as a response to corruption and police brutality. In other words, the use of excessive force and arbitrary prosecutions against the protesters started to build national consensus around the importance of rule of law.

Ukrainian nation-building was further advanced by the Russian incursion into Crimea. Pro-Russian demonstrations in southeastern cities like Odessa, Donetsk, and Kharkiv — attended not only by locals but also reportedly by Russian citizens, bussed in from the neighboring regions of Belgorod and Rostov — were countered by substantially larger demonstrations for a united Ukraine. Polls taken immediately prior to the Russian invasion showed that only a minority of southeasterners supported joining the Russian Federation — 26 percent in the eastern regions and 19 percent in the southern regions. Outside of Crimea, where 41 percent of respondents supported secession, the highest support for joining Russia, 33 percent, was in Donetsk.

Southeastern oligarchs who previously backed Yanukovych have also spoken out in support of the central government, underscoring the fact that Kiev does not face creeping secessionism in this part of the country. Two notable oligarchs, Serhiy Taruta and Ihor Kolomoisky, accepted appointments as regional governors after Yanukovych’s ouster.

The fact that the current crisis has actually ameliorated the regional divide presents Kiev with a unique opportunity to advance democratization by calling early elections, not just for the presidency, but also for the parliament and for local councils. After the tectonic shift in the political landscape brought about by recent events, the electorate should be given a chance to select new representatives. New parliamentary elections would not only increase the legitimacy of the post-Yanukovych government in Kiev, but could also foster healthier political competition. In the years since independence, domestic political competition has been driven too much by the east-west divide, and not enough by the kinds of economic and social issues that divide parties in mature democracies. With the vast majority of Ukrainians united on the question of sovereignty and against Russia-dominated geopolitical projects, however, political competition can finally begin to develop along social and economic issues. This in turn makes it more likely that politicians will be judged by their ability to address corruption and improve the economy, rather than whether they are on the “right” side of the cultural and geopolitical divide.

At the same time, the implosion of Yanukovych’s Party of Regions, which has dominated the country’s southeast for the past decade, opens the way for new political players. This may strengthen voter and civil society activism in a region where, due to one-party dominance, civil society has been more passive. A new political party representing southeastern interests in Kiev would likewise guard against a sense of disenfranchisement that could breed radicalization and separatism. Elections are also likely to reduce the electoral appeal of far-right parties, because voters will no longer view supporting them as a protest vote.

The Euromaidan protests also left the government with a mandate to strengthen civil and political rights and work towards strengthening the rule of law. To this effect, the new government should establish a South African-style truth and reconciliation commission to investigate the violence that occurred over the last three months. It should not turn these issues over to Ukraine’s perennially weak and politicized courts, which have been thoroughly discredited by their role in the protests — jailing protesters on flimsy evidence and then releasing them in batches at the executive’s beck and call. The pressure on judges during this period was so pervasive and effective that the one judge who pushed back against the Yanukovych government was quickly forced to resign. Against this backdrop, any future court decisions that are in line with the preferences of the current government will be perceived as illegitimate by the opposition and as a continuation of the tradition of politicized justice. Committing any decisions with political ramifications to the judiciary will therefore deepen the rule of law problem and inflame regional tensions. Instead, the government should pursue slow and careful reforms to depoliticize the judiciary and the prosecution.

Equally important, the new government should keep in mind that the protests did not give them a mandate to pursue a major change in geopolitical course. They should not touch the Russian Black Sea Fleet question with a 10-foot pole and neither should they bring up the question of NATO membership any time soon. A poll from early March suggests that in a hypothetical referendum on EU accession, 62 percent of Ukrainians would vote in favor — a slight increase from 55 percent who said they would do so in February. But again, any move towards the European Union has to be careful. It is possible that the boost in European popularity is a product of the EU association with lower corruption and stronger rule of law, rather than any change in Ukraine’s geopolitical or cultural orientation.

But if the new government must move slowly and deliberately, a window of opportunity for the democratic project has nonetheless been opened up. Because of the unifying force of the recent crisis, the central government can now afford to pursue policies — such as elevating the status of the Russian language and giving regions more autonomy — that were previously perceived as dangerous due to their potential to dilute national identity, weaken central government control, and undermine Ukrainian sovereignty.

Language policies are a case in point. Polls show that among the three most commonly discussed options for language policies (Ukrainian as the only state language with Russian having no formal status, Russian as a second state language on par with Ukrainian, and Russian language officially having the status of a regional language in regions where the majority of the population wants it) the third option is the most popular. Forty-seven percent of respondents prefer making Russian a regional language, whereas only 19 and 28 percent of respondents prefer the other two options, respectively, according to a 2013 poll by the Kiev International Institute of Sociology.

Finally, stronger national unity and increased support for anti-corruption and rule of law initiatives can, in the medium-term, facilitate much-needed and much-delayed economic reforms. Ukraine needs to reduce its dependency on Russian gas, which in turn necessitates modernizing its outdated industrial plants. Structural reforms would be undoubtedly painful for the population, but what better time to call on Ukrainians to sacrifice economically than after a Russian invasion, and after the mind-blowing plunder of the state treasury during four years of Yanukovych rule?

What Russia views as punishment — annulling an agreed-upon gas price reduction and halting nuclear fuel supplies to Ukrainian power plants — actually gives the new government political cover for doing what needs to be done anyway to save the economy. With Western states and donors focused on the crisis and offering substantial aid — such as the $15 billion offered by the European Union, plans to scrap tariffs for Ukrainian goods on the EU market, and the aid package recently approved by the U.S. Congress — Ukraine may be in a better position to move ahead with democratic and economic reforms than at any other point since independence. With the West willing to help and its citizens willing to endure some economic hardship, there’s no telling what the new government in Kiev can accomplish.