What looks like an official effort to keep the web clean isn't working.

The Chinese government’s latest effort to bring the country’s social web under control appears to be backfiring. A new phase in a government crackdown on undesirable online content announced March 28 — called “sweep out yellow, strike at rumors” (the former referring to pornography, the latter including opinion contrary to the Communist Party line) — has become a hashtag on Sina Weibo, China’s Twitter, bearing the same name. It appears to be an astroturf campaign: authorities have encouraged the hashtag, even if they did not generate it, by inviting netizens to get in on the anti-porn action through “joint monitoring and reporting.” And join they have, by labeling not-quite-pornographic material with that tag in what looks an awful lot like a bid to taunt censors.

One user in Dongguan, a former industrial hub in Guangdong Province infamous for its sex trade, used the hashtag in his post of an excerpt, rife with sexual innuendo, from the classic Qing dynasty novel Dream of the Red Chamber. He added, “Uncle Policeman, what do you think about this?” Another user tagged an understated but clearly homoerotic passage from the same novel, ending with the dare, “Come and get me!” (The campaign has included the arrest of over a dozen writers of homoerotic online fan fiction, or “slash,” all of them women.) One user took the campaign’s name literally (in Chinese, “yellow” can mean “pornographic”), daring authorities to delete this image: 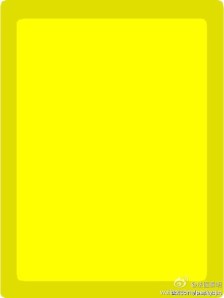 Beijing has successfully harnessed the Internet’s viral power in the past: President Xi Jinping made an unescorted, tailor-made-for-social-media visit to a modest bun shop in December 2013, which caught on like wildfire, turning the restaurant into something of a pilgrimage site. But more often, it falters: The hashtag “Brother Qiang Style,” using the common online nickname for Chinese Premier Li Keqiang and echoing the wildly popular song “Gangnam Style,” quietly appeared on Weibo in late 2013. In March 2014, a spate of articles, including one on Xinhua, China’s state news agency, heralded the popularity of “Keqiang Style,” the premier’s allegedly distinct and attractive governance style. But despite what appeared to be official support, the hashtag was dead on arrival, to date boasting an anemic 95 posts, many of which read like clunky dialogue from a propaganda film. This one has fared far better, with 23 electronic “pages'” worth of mentions since its inception. But that’s partly because the tag also has the likely unintentional effect of allowing users to find (blurred) pornography more easily.

The United States Is Pushing Lebanon Further Into Iran’s Embrace

The World’s Most Technologically Sophisticated Genocide Is Happening in Xinjiang